Visit Rome: History and legends of the Scala Santa in Rome

Among all the places you can visit in the capital of Italy, the Scala Santa is one of the most interesting ones. It's not a secret it is visited not only by believers, but also by all those interested in history and mystery. This staircase was moved to Rome approximately in 322 by the saint Elena, - the mother of Constantine, - with some other sacred relics. Lately, the Scala Santa was given as a gift to Silvestre I, who placed it in the ancient imperial palace, the Lateran Patriarchium. 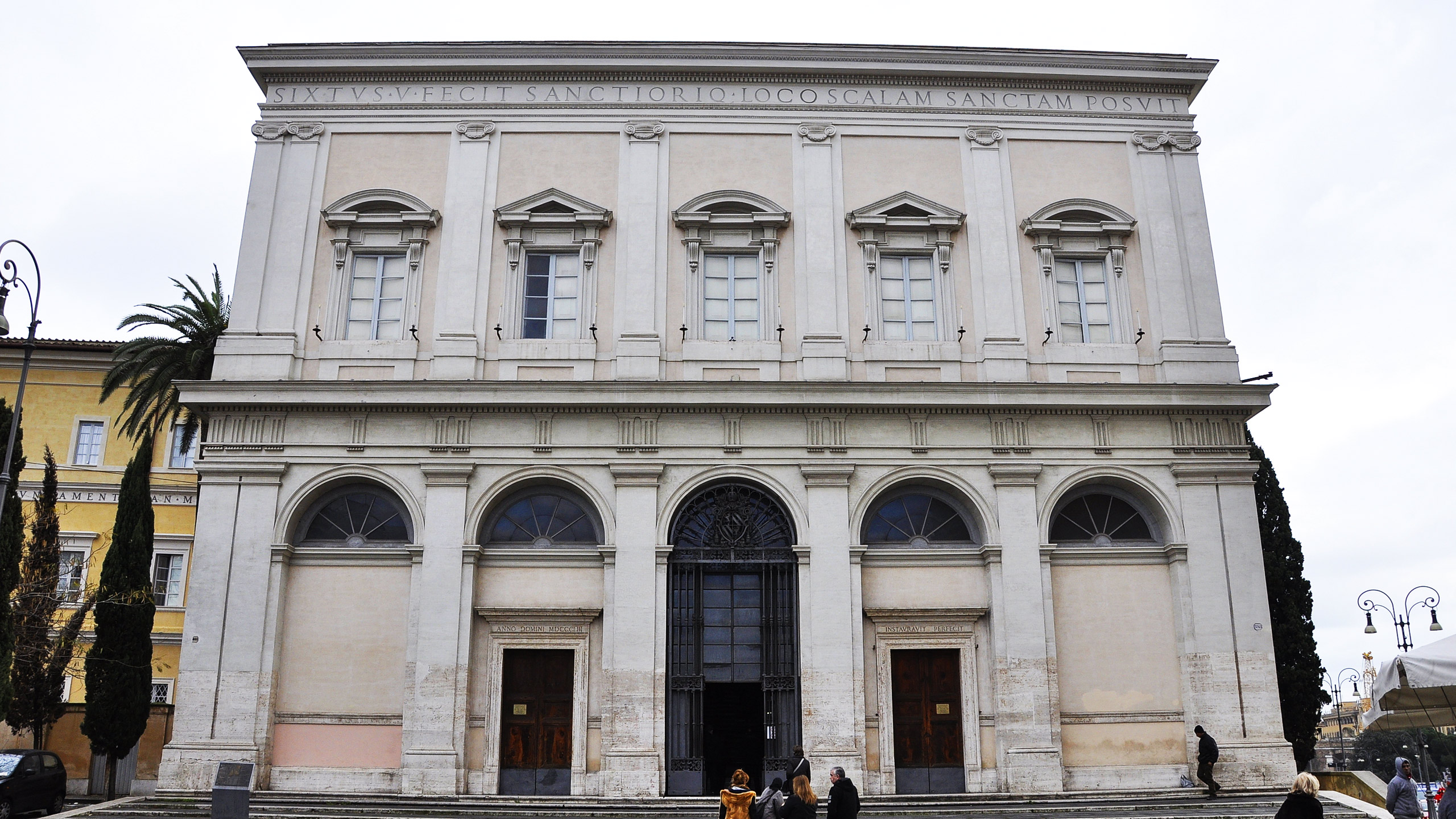 This particular building was built itself on the ruins of the oldest Constantine Papal palace, whose history dates back to the roots of the Roman Empire. The Scala Santa has about 28 marble steps. At the beginning, it was put in the portico of the Lateran basilica, the private Pope chapel: the Sancta Sanctorum. With no doubt, this is the most famous and visited holy stairs in the world. Nowadays, it is a popular pilgrimage destination of Catholics.
Next to it, there is the basilica of San Giovanni in Laterano, rich in stories, legends and mysteries. According to the legend, indeed, Jesus himself walked along this stairs reaching the room where he answered Pontius Pilatus' questions, shortly before the crucifixion. Subsequently, two chapels were added to the sides of the Scala Santa: Saint Silvestre and Saint Lorenz stairs.

The ascent of the Holy Stairs, on the knees
Some Christian believers use to climb the Holy Stairs on their knees. This happens especially in the days before Easter. This custom is very old and it has always been respected by the devotees. By the way, there is also a very peculiar legend about it. Some chronicles of 1600 tell an unbeliever wanted to climb it by feet. However, as soon as he reached the eleventh step, the one where Jesus fell, as the legend goes, a mysterious force bent his legs letting him falling down. For this reason, but also to show their devotion to the cult, many believers prefer to climb it up on the knees. To avoid being consumed by the knees of the faithful, the staircase was covered by a large walnut wood layer of protection, that’s why the marble of the staircase is visible only through the cracks in the protective layer created over time.

On the top of the Holy Steps, instead, the believers can observe the representation of Jesus crucified and a large window with the grating. Right at this point, the believers of the Holy steps make a stop to adore the image of the Saviour, still jealously preserved within the Pope's private chapel. The Sancta Sanctorum of the Popes houses an extensive collection of various sacred relics. If you do not want to walk the Holy Stairs on your knees or you prefer to see the other areas of the place, you can use the immediately parallel staircase. The latter passes through the oratory of Saint Silvestre and it allows access to the heart of the Sancta Sanctorum. Inside of it, you will find a wide range of artistic objects and allegorical representations with the Bible as main theme. 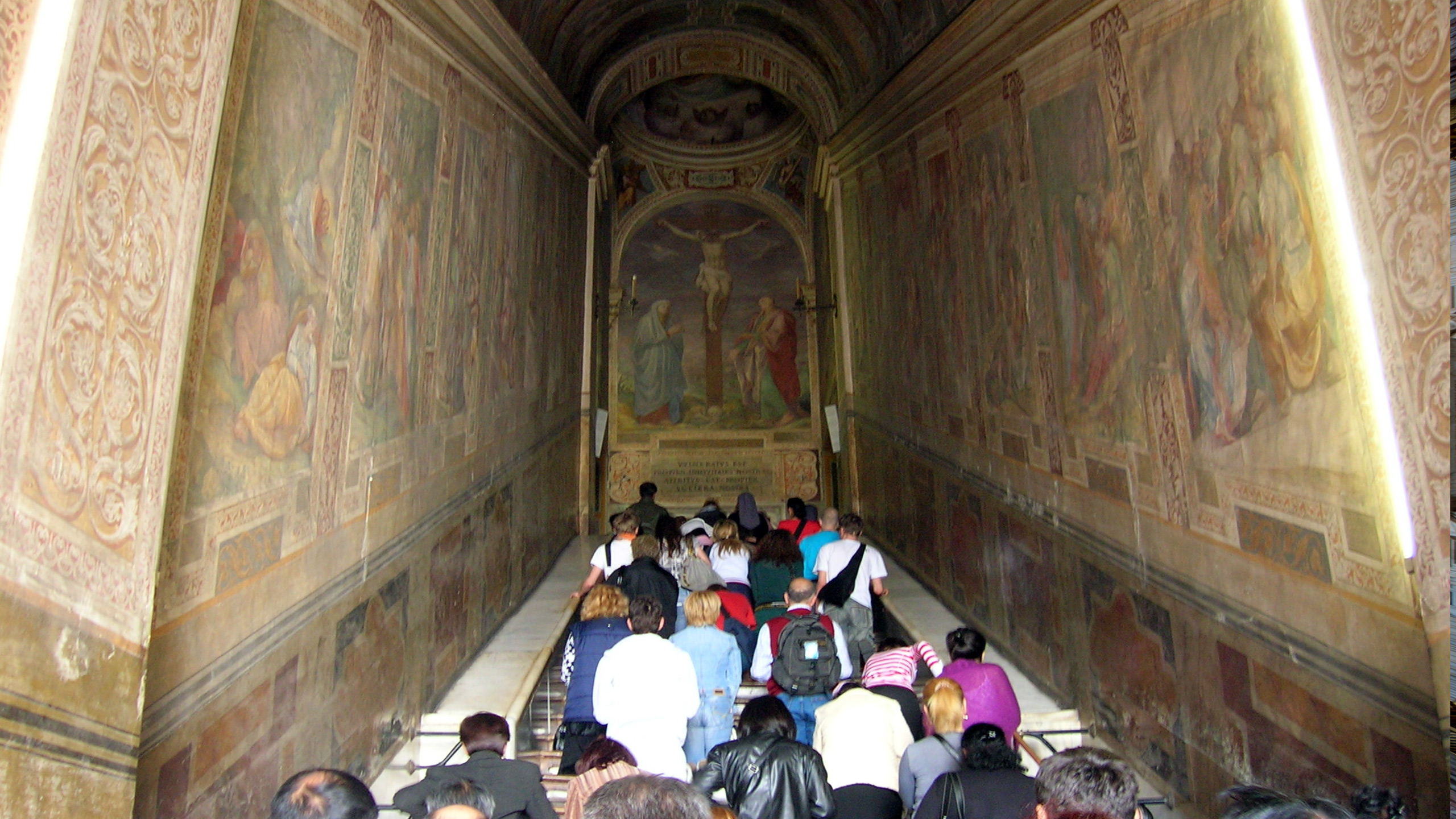 The legend of the image of the Christ the Saviour
A legend tells it was directly realized by the Apostle Luke, known to the world thanks to its popular pictorial qualities. The image was made upon request of the believers, who wanted to see an image of Jesus after his death. The apostle carried out a basic design and then he went to sleep. According to what people say, during the night the drawing was completed by itself: the colours, the shapes, the shades and anything else appeared as a miracle. Because of this miracle, the image was called "Acheiropoieta", from the ancient Byzantine Greek, referring to a painting created by a divine hand. Nevertheless, what you see today is not the original image, but a silvery cover created by decision of Pope Innocent III. There is also a silk veil that covers the original image, to protect it. For this reason ,it is almost impossible to see the original drawing that, apparently, is the result of a somewhat surprising and supernatural beauty.

In front of it, you can find the closet with the holy relics: it is armoured. Despite well protected by various defence systems, the objects kept inside it are clearly visible. Among them, what they say is a part of the wood of the table on which was the last supper stands out. There are numerous stories and urban legends also about it. It is said the Apostle Peter brought this relic in Rome, but it is an old legend and most historians do not agree with it.

Near the Scala Santa, you can also find other works of art, such as the Christ on the column, the Kiss of Judas, the Ecce Homo, the Pietà and Pius IX. All of them were made by real masters and the emotions these sculptures try to convey to visitors are unique in their kind. You have just to see them, to believe it!

The right path is very similar. The stairs is introduced by the frescoes concerning the Jewish Easter celebration and the bronze snake that saved the Jewish people in the desert. Here, you can also admire the Red sea crossing (the famous biblical story), the pillar of fire that obstructed the passage of the Egyptians, and other stands out Biblical representations. Arriving at the top of the Scala Santa, it is important not to forget to turn your gaze upwards, to see other wonderful biblical representations whose artistic beauty has continued to conquer the hearts of people, over the centuries. You can visit the Holy Stairs every day.