The typical lanes in the Jewish ghetto and the Portico d'Ottavia, in Rome

The Jewish ghetto is one of the most suggestive and moving places in Rome. Sant'Angelo district was chosen to isolate the Jewish citizens. Just a few hectares, than 3000 people were forced to live in. The evidence is there since 1555, and nowadays they are a memorial, and an example of a prestigious mediaeval architecture example.

Visiting the Ghetto
The Ghetto in Rome is situated not far from the Colosseum, in Sant'Angelo District, the forest site of Jewish citizens after Pope Paolo IV's seal. The motivations of the decision were connected to a sort of ungratefulness towards the Italian people.
And that was enough to confine them in a real prison, where gates at the entrance and the exit were situated, limiting them, without allowing them to go out.
They were also forbidden to buy buildings, and sell anything, except for clothes. This imposition carried them to specialize themselves in that sector, and saving money, getting a benchmark if you needed a loan.

Living in the Ghetto meant to fight against the common Tiber floods. It was an unhealthy place, where they didn't maintain buildings, getting decaying.
The district was called “Ghetto”, to imitate the one already existing in Venice, named "gheto". Other people think the name comes from the Jewish term meaning "division". The area went on increasing so much, they had to enlarge it towards Teatro Marcello and the river period.
The segregation of Jewish people finished in 1849, when the second Roman Republic was born. It took 20 years to make Jewish people equal to Italian people, giving them the same rights.
By the decades, the old buildings were demolished to build three new streets: Portico d'Ottavia, Tempio, and Catalana.

What to see in the Ghetto
The synagogue is one of the most famous monuments in the Ghetto in Rome, and also the most visited district on the river. It is a building on two levels called "Tempio Maggiore", characterized by a big dome on squared bases. It is a religious, cultural karma and trading benchmark for Jewish people.
In 1982, the synagogue was affected by a cruel attack, moving institutions and people all over the world.
After the synagogue built - opened in 1904 - Jewish people had a privilege place from where observing the beauty and the magic of Rome. The style you can distinguish nowadays, characterised by Assyrian- Babylonian decorations, was designed by Architects Vincenzo Costa and Osvaldo Armanni.
By the time, the Jewish Ghetto was modified many times, changing its shape, without affecting the beauty of the streets and of the historical buildings.
Because of the huge population the district is developed in height, buildings are very tall, and often in bad conditions. But we can consider it an update value to the beauty of the area, peopled by many passages, the bridges the people there have cold "passetti". Along the streets, you can see the evidence of the segregation, such as in the Tempietto del Carmelo, where Christian message used to take place to convert Jewish people to the Catholic religion. History tells many of them used to put invisible earplugs, as they were forced to take part to the Mass.
What you will see in Via di Sant'Ambrogio, Via della Reginella, surrounded by squares, narrow lanes, and wonderful panoramas will completely immerse yourself in the Ghetto atmosphere.

The Jewish Museum
In the synagogue underground, the fascinating Jewish museum is situated, telling the story of a people, its faith and its military traditions.
In the 7 Rooms it is divided in, you will be able to see objects collection of precious handmade tissues, but also documents, parchments, silver and marble objects, etc. The tour in the museum is good also for who doesn't know the Jewish culture, because it is not only a collection of remains. Each one of them tells something new, hides mysteries, reveals secrets and unknown features, also concerning Familiar traditions those people has ever had.
The art they created getting experts in their work can be admired on thousands of precious tissues from all over Europe. Everything talks about the uses and the meanings of ancient gestures, demonstrating how much faith can be melted to lifestyle and public life. The museum hosts also a collection of multi-colored marbles and ancient books, the first hand-written books by using movable type, after the press discovery. There are also some documents about the censorship the Inquisition Court ordered by the centuries.

The Portico d'Ottavia
The Portico d'Ottavia is the only one entrance resisting of the Jewish Ghetto in Rome, and it dates back to the 2nd century BC. There was also a temple dedicated to Juno Queen, and one dedicated to Jupiter. In the Augustan age, it was restored and dedicated to his sister, taking her name. Because of several fires, copious restorations took place, until the middle ages, when it was set a fish market, and Sant'Angelo in Pescheria Church was built.
Today you can cross the court walking on the street with the same name, available for people with disabilities, too. There is a little passage - the "passetto" - connecting the area to the buildings of the Foro Piscario. 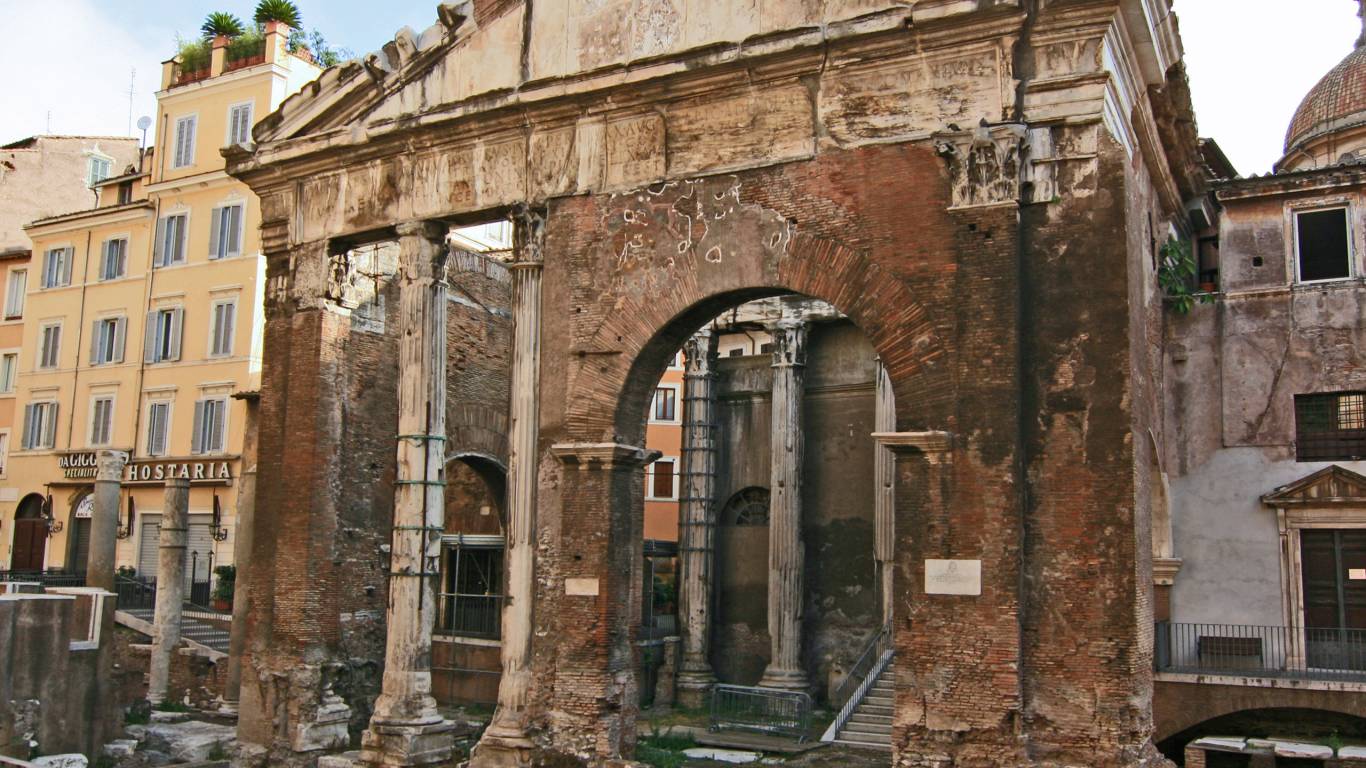 Visiting the Jewish Ghetto in Rome means discovering the typical food of those people, with the Jewish artichokes as leaders of a long list of tasty dishes.
Jewish food is famous also by the name of "kosher", and it respects their religious rules, as the name itself says: it means "allowed", permitted by the law. Other typical tasty foods are cod fillets, you can taste on May, with other types of fish, and soups too.
The Jewish Ghetto respects closing Shabbat time - on Saturdays - according to the culture and religion, but it is open on Mondays.