The Basilica of San Pietro is the most important church in the world and a symbol of all Christianity, for this reason therefore one of the most visited places not only in the city but on the planet. Its dome, designed by Michelangelo, overlooks the roofs of Rome, occupying every panorama of this splendid city.
Reaching the Basilica of San Pietro, there is another work that still today amazes for its extraordinary design: it is the colonnade of Gian Lorenzo Bernini.

The birth of the new Piazza San Pietro
Reaching Piazza San Pietro from Via della Conciliazione, there the outline of the Basilica appears, with the opposite area lapped by the colonnade and with the obelisk soaring in the centre. What today appears to be one of the most beautiful and elegant square in the world, was a bare and desolate place, not very suitable for welcoming the believers who flocked to Rome to pray at the tomb of St. Peter. It was a square exposed to the weather, to the rain and the sun and, especially during solemn ceremonies, the path that connected the Basilica of San Pietro with the apostolic palaces was often covered by curtains to repair believers and prelates.
It was then that Pope Alexander VII Chigi expressed his desire to give the square an appearance worthy of the Basilica of Saint Peter, deciding therefore to entrust the project to the architect and sculptor, prince of the Italian baroque, Gian Lorenzo Bernini. The latter designed the square ideally dividing it into two parts: an oval, embraced on the sides by two hemicycles made up of imposing columns, and the other trapezoidal part, close to the façade between two horizontal arms connecting the ends of the hemicycles and church itself.
Bernini built the square between 1656 and 1667, facing many difficulties due to the presence of pre-existing buildings and the unquestionable economic expenditure that the work entailed: the result, however, is wonderful, even compared to the majestic facade of the Basilica of San Pietro itself.

The genius of Bernini in the Colonnade
Approaching Bernini's Colonnade you can count on a triple portico (according to some, a choice that refers to the Temple of God described by Ezekiel) consisting of 284 imposing Doric columns with Tuscan capitals and 88 large Tivoli travertine pillars. Look up beyond the simple and flat entablature, above which not only the six coats of arms of Pope Alexander VII Chigi rise, but also the 140 statues. If looking at them from below they seem enormous, know that they are actually more than 3 metres high and converge, as a sort of procession, towards the central figure represented by Christ: many Christian figures can be distinguished, from St. Thomas to St. Charles, from St. Joseph to Saint Leo Magnus, from the Saints Cosma and Damiano to Saint John.
By this colonnade, Bernini created a hemicycle, as if to create an embrace of Christianity that meets in the presence of the papal throne. To improve the perspective and solve the disharmony that would have been created by choosing these curvilinear wings, Bernini arranged the rows of columns radially, increasing at the same time the diameter and keeping the proportions between the columns and spaces intact.
The result of this work of engineering is sublimated by the vision you will have by reaching the porphyry discs at the foot of the obelisk: the colonnade will appear almost straight and not curved. 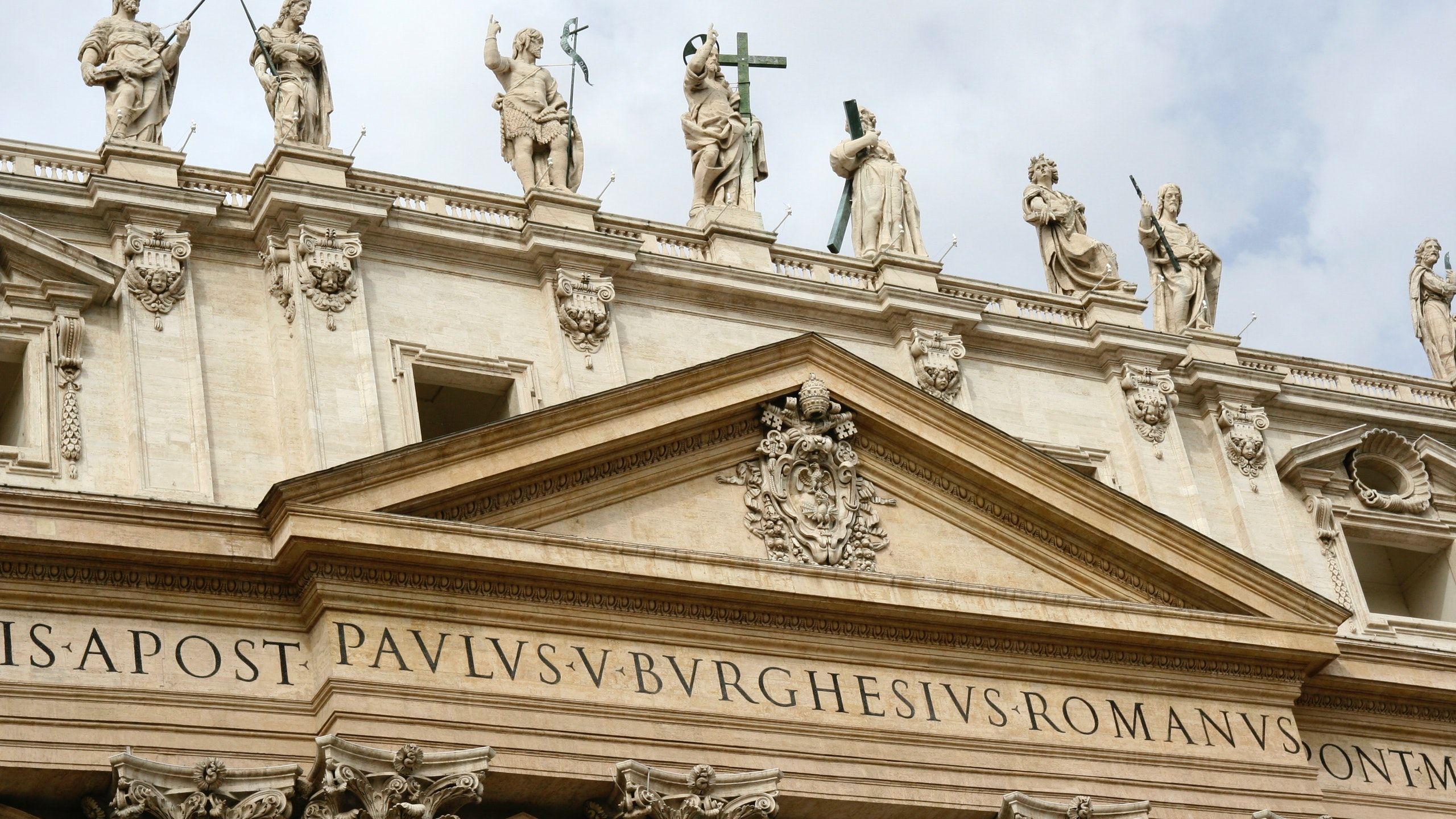 Discovering Piazza San Pietro: the obelisk
Before leaving Bernini's work, know that there is a legend: it is said that in the past a German pilgrim put a signature on one of the 284 columns. On what today appears to be a vandalism, the story told anyone who can find this signature will be kissed by good luck at the game. Well, if you believe in this story, wander among the surprising columns before immersing yourself in the splendour of the Basilica and the Piazza itself, where the Vatican Obelisk stands, 25 metres high. According to Pliny the Elder, this red granite monolith was built in honour of the sun god Ra, by the wishes of the pharaoh Nencoreus in Heliopolis, in Egypt. In 40 A.D., however, Caligula ordered to bring the obelisk to Rome, to place it in Nero's circus: think that to ensure its integrity, the obelisk was literally immersed in lentils until it reached Rome.
Only by Pope Sixtus V, the monolith found its definitive position in the heart of St. Peter's Square, even though it took 50 horses and 900 men to move it.

The sun's greeting
Before entering St. Peter's Basilica and reaching the staircase, also by Bernini, to the side of which the monumental statues of St. Paul and St. Peter welcome you, enjoy the beauty of Bernini's colonnade again. Admiring the work and walking on the cobblestones, with a little attention you will see a wind rose on the ground, made with green and red marble, but above all a sundial, both nineteenth-century works by the astronomer Gilij. The sundial was made of red granite, and on it you can see eight marble disks, of which five indicate the transition of the sun into the zodiac signs, while on the two at the ends the shadow of the cross of Christ is projected on June 22nd December 22nd.

The facade as a completion of the colonnade
If you are wondering where the statue of Jesus Christ with the cross is, look at the entablature of the colonnade until you reach the façade of the basilica, a work by Maderno that completed Michelangelo's original project in 1612. You can see the mighty pilasters and columns with Corinthian capitals that characterize the lower order and which frame the five monumental entrances, dominated by nine windows. At the centre, you cannot fail to notice the Lodge of the benedictions, from where the Pope appears for the "urbi et orbi" blessing (to Rome and to the world), or the proto-deacon at the time of the announcement of the new pontiff, newly elected.
The second order of the facade is dominated by the balustrade on which the statues of the Apostles, of St. John the Baptist and in the centre that of the Redeemer who greets you and all the believers who flock to Piazza San Pietro stand, in the symbolic embrace of the wonderful colonnade by Bernini.