Holidays in Rome: Raffaello and Renaissance in Rome

The eternal Rome hosts numerous Renaissance works by Raffaello, one of the most important Italian artists who lived between the 15th and 16th centuries. His paintings are hosted in museums, galleries and villas, fascinating architecture photographed by thousands of tourists from every corner of the world. Raffaello Sanzio arrived in Rome in 1509, and he spent his time there until his death. Pope Julius II strongly wanted the artist from Urbino to work with with Michelangelo and Donato Bramante with the aim of revolutionizing the artistic and urban appearance of the capital and, in particular, of the Vatican state.
The most prestigious works Raffaello dedicated himself to with extreme passion are those carried out in St. Peter's Basilica, commissioned by the new Pope Leo X. If you are planning to visit Rome, we recommend you an alternative tour along the footprints of Raffaello's Renaissance, to discover the most fascinating works that the genius of Urbino gave the city. All over the year, the Italian capital hosts several exhibitions dedicated to the painter and the architect from Marche, in many important cultural centres.

The works by Raffaello Sanzio in the Vatican Museums
The frescoes in Eliodoro's room are one of the works since his arrival in Rome, after finishing the decoration of the Segnatura room. In addition to the latter, there is another space in the Vatican Museums dedicated to Raffaello. The frescoes of the Bolsena Mass, of the Liberation of St. Peter and of the expulsion of Heliodorus from the temple are very noticeable, whereas in the Segnatura room there are: The School of Athens, Dispute of Acration, Parnassus and Virtue and the Law.
After the completion of the works in Eliodoro's room, Raffaello Sanzio created the cycle of frescoes included in the Stanza dell'incendio di Borgo. In the internal itinerary of the Vatican Museums, this work is part of the complex of the Leone X rooms. Finally, you can admire the presence of the artist from Urbino in the famous lodges, such as the one of Raffaello and Cardinal Bibbiena.

The works by Raffaello Sanzio at Pinacoteca Vaticana
Among the first masterpieces of a very young Raffaello Sanzio, the Pala degli Oddi is proudly preserved at the Pinacoteca Vaticana. The panel painting shows three different scenes: the Presentation at the temple, the Adoration of the Magi and the Annunciation. To find a similar work, it is necessary to visit the Pala Baglioni, you can see in the same gallery.
The paintings include Faith, Charity and Hope, whereas the Borghese Deposition is kept in the Gallery with the same name. Both the altarpieces date back to a time before the Roman period. Inside the Pinacoteca Vaticana, there are other important treasures by Sanzio, including some splendid tapestries. Finally, the paintings of the Madonna di Foligno and the Transfiguration have an important historical and artistic value. The latter is the last work Raffaello worked on before he died, at the early age of 37.

The works by Raffaello Sanzio at the Galleria Borghese
Continue your visit in Rome living Raffaello's Renaissance at the Galleria Borghese, where you will discover other paintings and frescoes by the painter from the Marche. Some date back to a time before the Roman period, such as the Portrait of the Man and the Lady with the Unicorn. In the first work, scholars are still not sure who Raffaello Sanzio wanted to portray. According to the art historian Morelli, the person in the portrait should be Pinturicchio, a Renaissance painter working in Italy in the second half of the fifteenth century. Previously, the painting was attributed to Perugino, considering it a self-portrait by famous artist from Città della Pieve. In the Lady with the leocorn, Raffaello Sanzio depicted a woman attributing her the role of Saint Catherine of Alexandria. Here you are a fun fact: originally, instead of the leocorn, the woman was holding a dog in her hands. In common imagination, the leocorn represents virginal purity.

Other works by Raffaello Sanzio
Two years before his death, in 1520, Raffaello Sanzio produced one of his greatest masterpieces: the Fornarina, an oil painting on wood today at Palazzo Barberini, at the National Gallery of Ancient Art. The name of the painting comes from the woman portrayed by Raffaello. Indeed, scholars agree the model depicted in the painting is a young girl, the daughter of a baker, loved by the painter.
Another famous painting by Raffaello Sanzio you can see in Rome during a short stay is the portrait of Andrea Navagero and Agostino Beazzano, housed in the Galleria Doria Pamphilj. Unlike other works created by the genius of Urbino, critics agree attributing the identity of the protagonists to the two Venetian writers. The portrait dates back to 1516, before both the Fornarina and the Transfiguration. 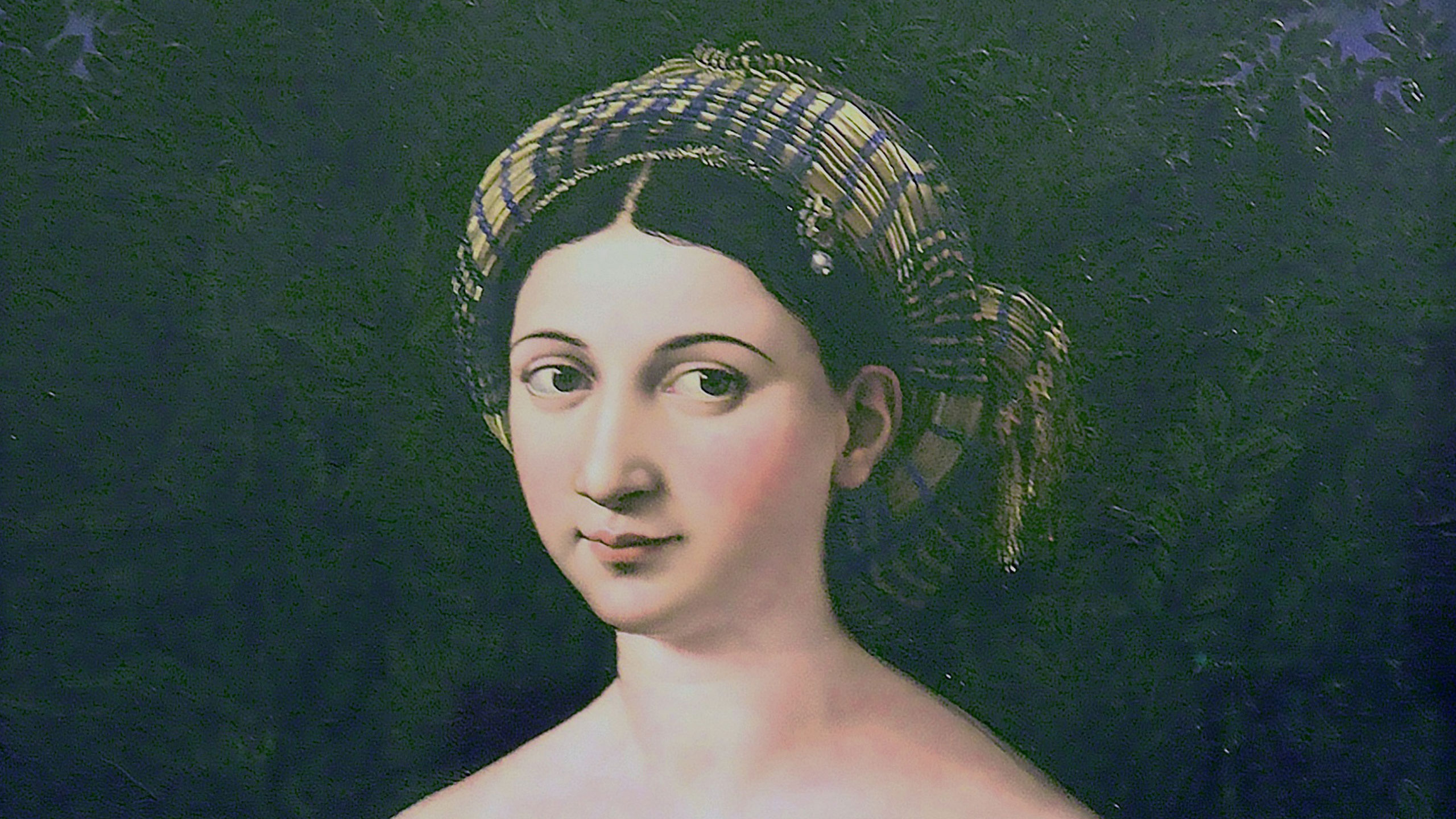 Architectural works by Raffaello in Rome
The most prestigious assignment assigned Raffaello received during in his 10 years in Rome was St. Peter's Basilica, where he worked from 1514 to 1520, year of his death. The painter and architect from Marche also left his indelible signature on other buildings, including the Palazzo Apostolico with the Loggia di Raffaello. He also made Villa Madama, perhaps the artist's largest unfinished project. If you wish to visit it, go to the slopes of Monte Mario. Today, it is the representative office of both the Ministry of Foreign Affairs and the Presidency of the Council of Ministers. Works began in 1518, whereas the inauguration dates back to 1525, five years after Raffaello's death. Another architectural work he took part to was the church of Sant'Eligio degli Orefici, begun by Donato Bramante and completed by Raffaello, officially opened in the second half of the sixteenth century. Finally, inside the basilica of Santa Maria del Popolo you can admire the Chigi chapel, commissioned to Raffaello by Agostino Chigi, after having worked at his Villa Farnesina.