The Galleria Borghese is one of the museums you can't miss if you visit Rome. It is situated inside the park Villa Borghese Pinciana, in the middle of Piazzale Scipione Borghese, and it exhibits hundreds of works by the most famous artists in the world, such as Gian Lorenzo Bernini, Antonio Canova, Agnolo Bronzino, Caravaggio, Perugino, Raffaello, Lorenzo Lotto, Cranach il Vecchio, Antonello da Messina, Pinturicchio, Tiziano, Annibale Carracci, Bellini, Pieter Paul Rubens, and so on.
The Galleria Borghese has no competitors in the world, especially if you think about the quantity and the importance of the art works it contains, especially concerning the ones by Bernini and Caravaggio. At the end of the 16th century, the Borghese family from Siena bought a piece of land in the north of Rome, not far from Porta Pinciana, to build an enormous Park there. In a few time, the family has been able to get an even more important value in the Roman aristocracy, especially after the election of Pope Camillo Borghese, in 1605. He took the ecclesiastic name of Paolo V, and his family went on building the park.

The history of the Park and the gallery
The work started in 1607, supervised by the Roman architect Flaminio Ponzio: just a few years before, he had built the families residents on the Tiber river Banks. In 1613, after the death of Ponzio, Giovanni Vasanzio was charged to complete the Works that lasted for several years. Meantime, the garden works started too, by Carlo Rainaldi, to be completed in 1620.
The building, clearly inspired to the Villa Farnesina and to the Villa Medici, had a big portico in front of the garden, decorated by the typical style of the 16th century. The façade was decorated by 70 busts and 145 low reliefs, hundreds of windows give a wonderful light to the internal area where to observe the works. The building contains paintings and sculptures, but also wonderful frescoes, such as sung by Cigoli, the author of Psyche' tale. After 1770, the interiors of the building work renovated by the will of Marcantonio IV Borghese, who charged Antonio Asprucci to make one big project. The architect he invited a large number of painters and sculptors and gave them the task of drawing up the new decorations to further enhance the property. Several works were made to decorate the walls by multi coloured marbles, frescoes, and stuccoes, and the majority of works represent the people of the family telling something about their story.
In 1902, the Italian State decided to purchase the structure with all its collections and to transform it into an art gallery. The first director of the museum was Giovanni Piancastelli, succeeded by Giulio Cantalamessa in 1906, former director of the galleries of the Accademia di Venezia. In 1983, the gallery got closed to be restored: the works took 14 years, to finally renew the façade that had suffered serious damages. The opening finally took place in 1997, because of some bureaucratic problems. However, the museum finally got the aspect and the success it deserves, as well as in 2013 it was the 9th most visited museum in Italy, by almost 500000 visitors. 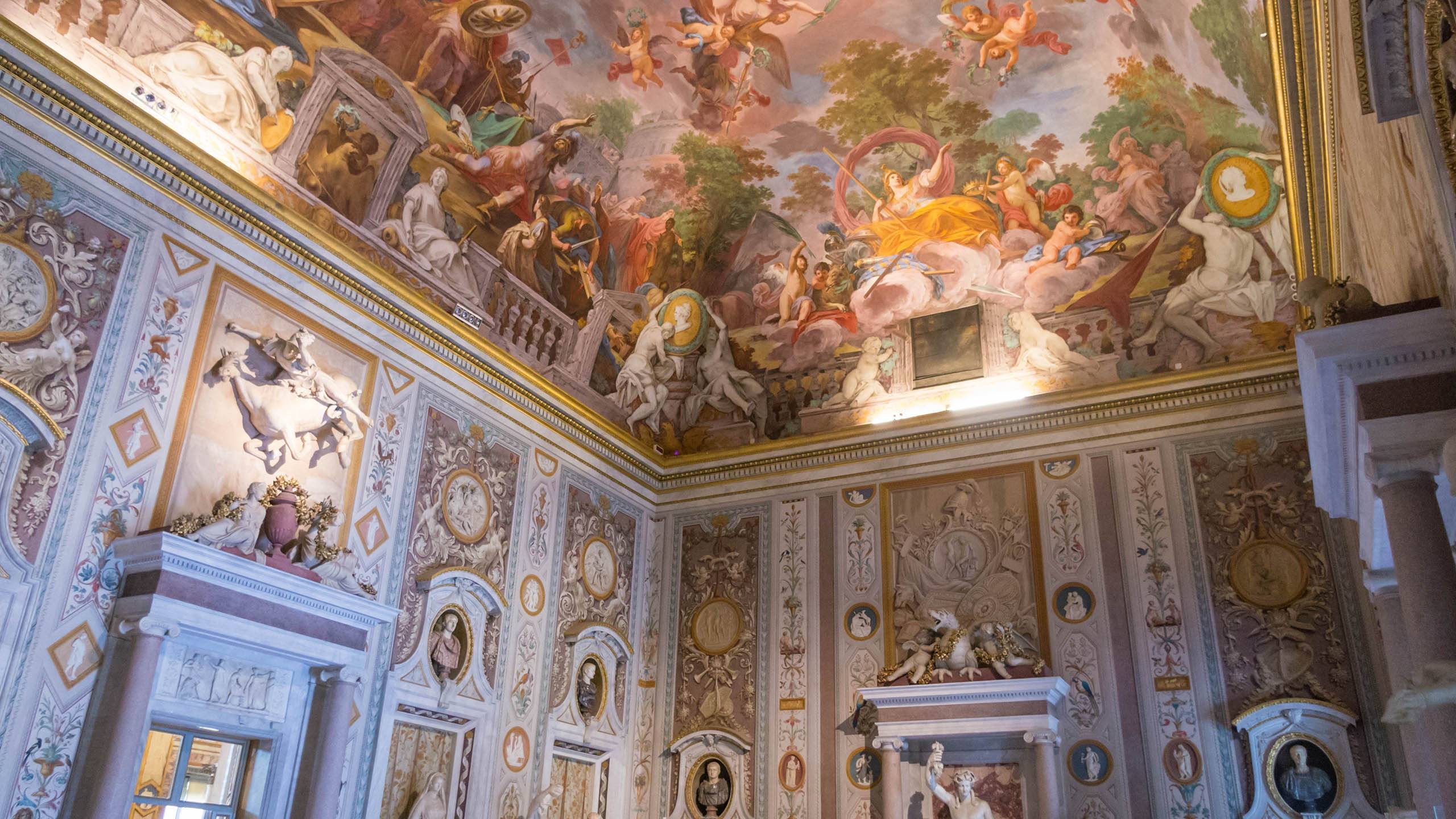 The main features of the building and the collections
The building was set on a land bought by the Borghese family in 1518, on an underground where they discovered Lucullo's residence and his famous Gardens. By the time, the area got enlarged by several purchases, such as the ones Cardinal Scipione Borghese did, to create the biggest garden room had ever had. Gian Lorenzo Bernini is one of the artists who took part to this renovation. One of the best features of the building is the park, decorated by several fountains and other little buildings the gardeners used as stores. At the beginning of the 19th century, the property got enlarged by Camillo Borghese, reaching Porta Pinciana and Porta del Popolo. The project was entrusted to the architect Luigi Canina, able to make a wonderful work.
Throughout the nineteenth century, it was possible to visit the park, walking around its avenues, and taking advantage of its beauty. Several parties took place during those years, too. Probably the most important collection you can see there is the one by Cardinal Scipione Borghese. He was a well-known art lover, owner of several ancient sculptures and paintings by famous contemporary artists from Tuscany.

During the seventeenth century, he decided to make the collection that has become one of the biggest ones in Italy. He tried to buy at least one work per artist, in order to represent their style and evolutions. When he died in 1633, the collection was very big, containing several stolen, purchased, and confiscated works. Scipione's work was carried out by other members of the family, at least until the prince Camillo Borghese - husband of Paolina Bonaparte - was forced to sell part of the works belonging to the family collection, by Napoleon (brother of Pauline). Some of the most important works of the collection: the "Madonna con bambino", by Giovanni Bellini, the "Apollo e Dafne" by Gian Lorenzo Bernini, the "Paolina Borghese come Venere vincitrice" by Antonio Canova, the "Danae" by Correggio, the "Davide con la testa di Golia" by Caravaggio, the "Deposizione Baglioni" by Raffaello, and the "Deposition in the sepulcher" by Rubens.