Cervara is the medieval village that seems to have directly come from a painting because of its beauty. Located seventy kilometres from Rome, it boasts just four hundred inhabitants, however it is a place of precious relevance from a historical and artistic point of view.
The medieval village of Cervara in Lazio is located in the highest part of the province of Rome. The historical centre has a medieval feature that perfectly melts with those of the mountain areas. Some of the most significant pearls in its history are the Church of Sant'Emidio and the Church of San Rocco.
The name Cervara comes from the large number of deer that once populated the area. From the village it is possible to admire the entire Aniene valley and perhaps thanks to its privileged position, the place was chosen in the past by several artists and writers as a favourite destination. Ernest Hebert went to Cervara in the 19th century where he created paintings such as Les Cervaroles now exhibited in Paris. Joseph Anton Koch there portrayed the landscape in several famous paintings, but also many other important people such as Samuel Morse appreciated the city for its beauty and tranquility.
After the Second World War, the village was so much populated that even Ennio Morricone was struck by its unique and suggestive atmosphere. Cervara is best known for being the gateway to the largest protected natural area in the whole region. 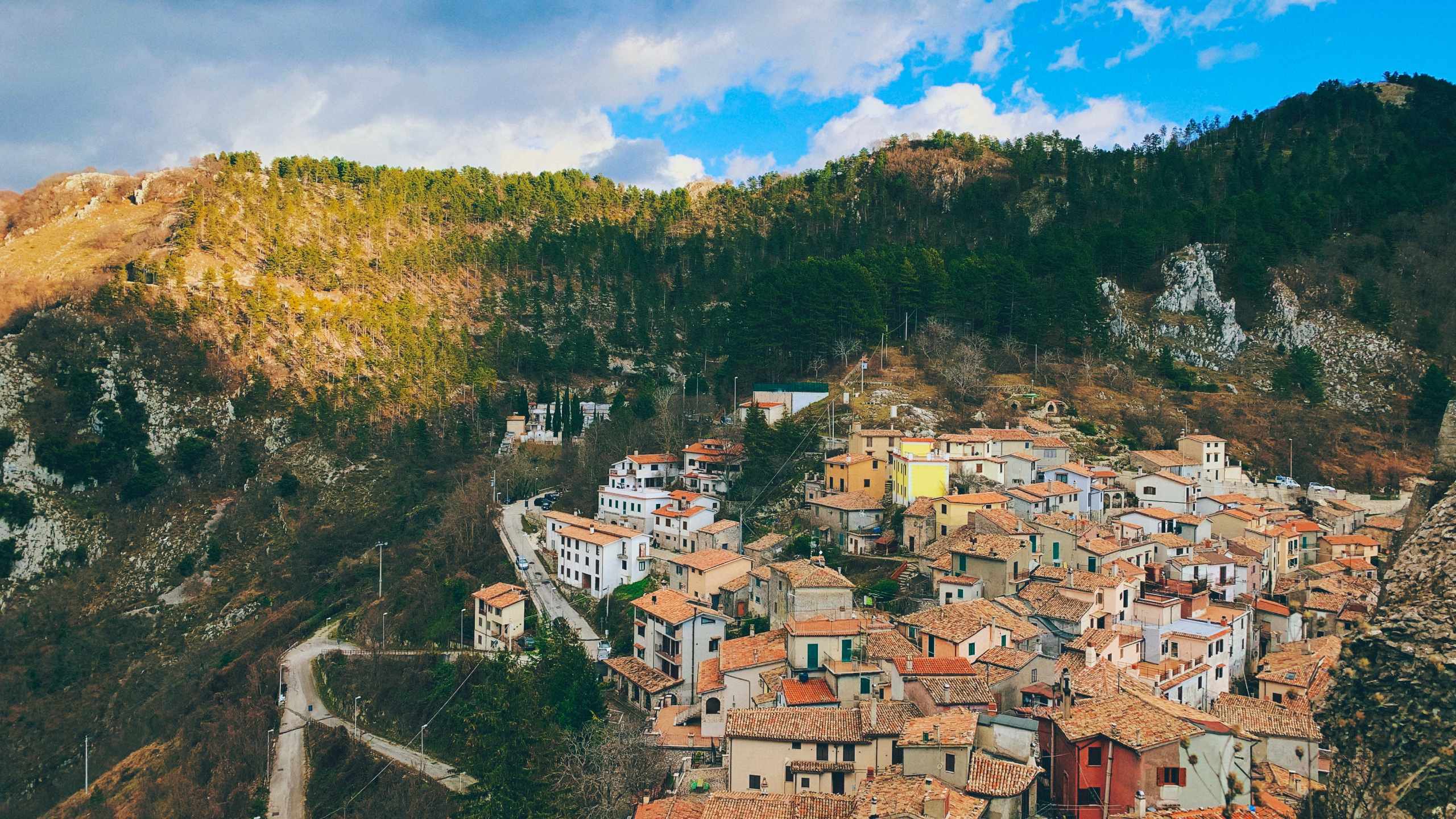 Historical centre of the village of Cervara: what to see
The historical centre still bears the signs of its past, the town structure itself recalls the fortress and the walls that characterized it in medieval times. Among the houses, it is possible to see the lookout tower, on the top instead the statue of the Immaculate Conception dominates. Under the medieval fortress, there are some churches, life of this country and its transformations. The historical buildings still have the same features of the past, especially the Town Hall. Beyond the rural churches, really small jewels, it is nice to get lost in the alleys of the town. Also the Museum of the Mountain is worth of mention, telling about the relationship of the place with the various artists, evoking the works and creations that concern it. Don' miss the astronomical observatory, you can visit by reservation. In the nearby places, for those who love winter tourism, it is possible to find cross-country skiing and trails to go on foot, by bike and on horseback.
There are many places of worship in the area: first and foremost the Church of Maria Santissima della Visitazione. One of the most visited places is located near the medieval ruins, built with local stone and adorned with a magnificent bell tower on the entrance door dating back to the fifteenth century. Inside, there still are the works of ancient value, among them the painting that represent the Visitation made in the early seventeenth century and placed on the main altar. In it, the Madonna del Carmine is depicted. In the sepulcher of the church there is the body of a martyr, found in the Roman catacombs and donated to the city by Pius VI and called San Felice, today protector of the country.
The Church of Santa Maria della Portella is located near what once were the country's gates. Built in 1702 by the Jesuit Fathers where a splendid statue of the Madonna with the child is still kept today. The Regional Natural Park of the Simbruini Mountains is worth of a visit, too. It is a natural area but rich in historical relics which extends for thirty thousand hectares among woods, valleys and streams. The ideal destination for those who love trekking or hiking in the open air.

History of the village and historical events
Cervara is a place that has a lot of charm for large and small treasures that still holds today. The first medieval document it was traced in dates back to August 883: is was the paper of Cesario's donation of the abbey and the neighbouring lands. Historians, however, claim the area was previously inhabited as a fortified village. Others argue its foundation dates back to the Saracens who fled to Vicovaro. Cervara was however a fortress in the 11th century and remained so for a long time until there was the passage to the domain of Subiaco, as a note by Pope Gregorio V stressed. The Abbots decided to build a fortress at the highest point of the mountain to defend themselves by the Saracens. This then became a military fortress and when the schismatic monk Pelagio took possession of Cervara, the whole area was besieged. In 1276, the papal army arrived with William of Burgundy to reconquer the area and after two months of siege he managed to free it.
The area experienced its heyday when Pompeo Colonna made it a very important centre with its own statute. The country, however, being between the Papal States and the Kingdom of Naples was the set of many battles, often threatened by the brigands who wanted to break in. In the following centuries, the ancient fortress lost its defensive role, although there were no particular events, this entered a period of decline. However, its historical beauty has made it a perfect tourist hub.

Monti Simbruini Regional Natural Park
This natural area is a set of parks and reserves more than 2100 metres wide. The name comes from the Latin 'sub imbribus' or under the rains. So named for the abundant fall of water that used to occurr there in antiquity. The park is located between the province of Rome and Frosinone in a karstic territory. In the park, there are very large wooded areas but also numerous species such as downy oak, hazelnut, chestnut and many animal species that are uncommon for those areas such as the badgers. In the undergrowth, there are also completely edible Porcini, currants, blueberries and strawberries. Fauna is very varied, too: there is the wolf, the brown bear, teh fox, the wild boar and the wild cat. There are also small carnivores such as badgers and many types of birds including the golden eagle and the peregrine falcon.

Holidays in Rome: discovering the most beautiful Street Art of the Eternal City

Rome undoubtedly is an open-air museum, but not everyone knows that, in addition to sites of historical and archaeological interest, it is also able to offer a large number of contemporary works of art.