Ostia Antica is a coastal section of Rome, located in the south-west of the city, between the Tiber river - in the northwest - and Via del Mare - in the south. In the past, the river ran along the northern part of Ostia, as the Italian translation of the Latin word "ostium" is "outlet", but over the time, its location has changed. In the sixteenth century the coast, actually changed its position of about four Kilometres, due to a flood and debris transported by the river. The first people who settled there were Roman people, and Ostia has linked its fate to that of Rome and its great empire.

The history of Ostia Antica
The city was founded in the fourth century B.C., and many findings confirming the ancient origin of the site were found. The proximity to the river and to the sea determined the fortune of Ostia, characterised by a remarkable growth over the time. It firstly was a military camp - from the Latin word "castrum" - in defence of the city of Rome, as at the time a military protection was very important. The ancient tuff blocks used for the construction of military forts bring the visitor back to the time of its first settlement. Ostia was also linked to the exploitation of the salt works located along the mouth of the Tiber.
The presence of salt was actually very important for the Roman people, because in the monarchical era it was the retribution of the Roman legions' soldiers. The term "salary", used to define the income of a worker, derives from the word "salt". In the Imperial age, the city changed its function, since there was no longer need of a massive military defence in Rome, as the borders were very far from the capital. By the time, Ostia became a very important trade point. The port had become a centre where grain arrived to supply Rome; after the salt, grain was another fundamental good for the growth of Rome. Ostia was surrounded by protective walls and three large doors: Porta Romana, Porta Laurentina and Porta Marina guaranteed access to the city. The fluvial port however was not able to provide enough goods for the big city, so emperor Claudius ordered the built of an artificial port, lately connected to the Tiber to welcome goods, in 42 A.D. Ostia lived a period of great splendour, full of goods from every part of the empire, and it became the centre of craftsmen and merchants' corporations.
In addition to the artificial port, another hexagonal one was built, commissioned by Trajan and inaugurated in 113 A.D. From the 3rd century A.D., Rome experienced a deep crisis due to the repeated barbarian invasions. Ostia almost completely disappeared, and only in the early years of the nineteenth century Pope Pius VII ordered the works to discover the ancient settlement.
Before starting the walk back in time to visit the world of the ancient Roman people, we recommend you to wear comfortable shoes and a hat to protect yourself by the sun, especially if you make the visit from April onwards. The best moment to visit it is at the sunset, when the peculiar warm light offers unique emotions.

The archaeological park of Ostia Antica
The route is a visit to an ancient Roman city, you can see the baths, the bakeries with the millstones where the famous round-shaped Roman bread was produced, cut form eight wedges to make it easier to break, before being baked. The tour continues along the ancient Roman streets where you find the "tabernae", the old bars with a stone desk and stone containers to preserve vegetables and everything that could be cooked quickly and eaten in the street or in the small indoor room.
The "taberna" was very similar to our diner. There were many craft shops and you can visit a store where the wine was stored in underground jars that could contain up to a thousand litres of wine each. The city was inhabited by rich and poor people who lived together in the same neighbourhoods, in ancient palaces - the "insulae" - sometimes on four floors. The last two floors got destroyed, so today we can only see houses on two levels. The houses of the Roman people have marvellous mosaics of black and white "tesserae" are still visible nowadays, many evoking the proximity to the sea in the subjects. Ships and fish were several, together with everything a city feeding itself by a port should have. Lastly in Ostia, you cannot miss a visit of the ancient theatre, commissioned by Augustus, where great events were played, enthusiastically involving the people who used to pay a symbolic price.
The shows actually were a way to keep good relationships between politicians and plebeians, so the price was never too high. The archaeological park therefore offers a glimpse of everyday Roman life, and among the ancient streets, it seems almost to hear the clamour, the confusion of the carts, and the smell of a past life. 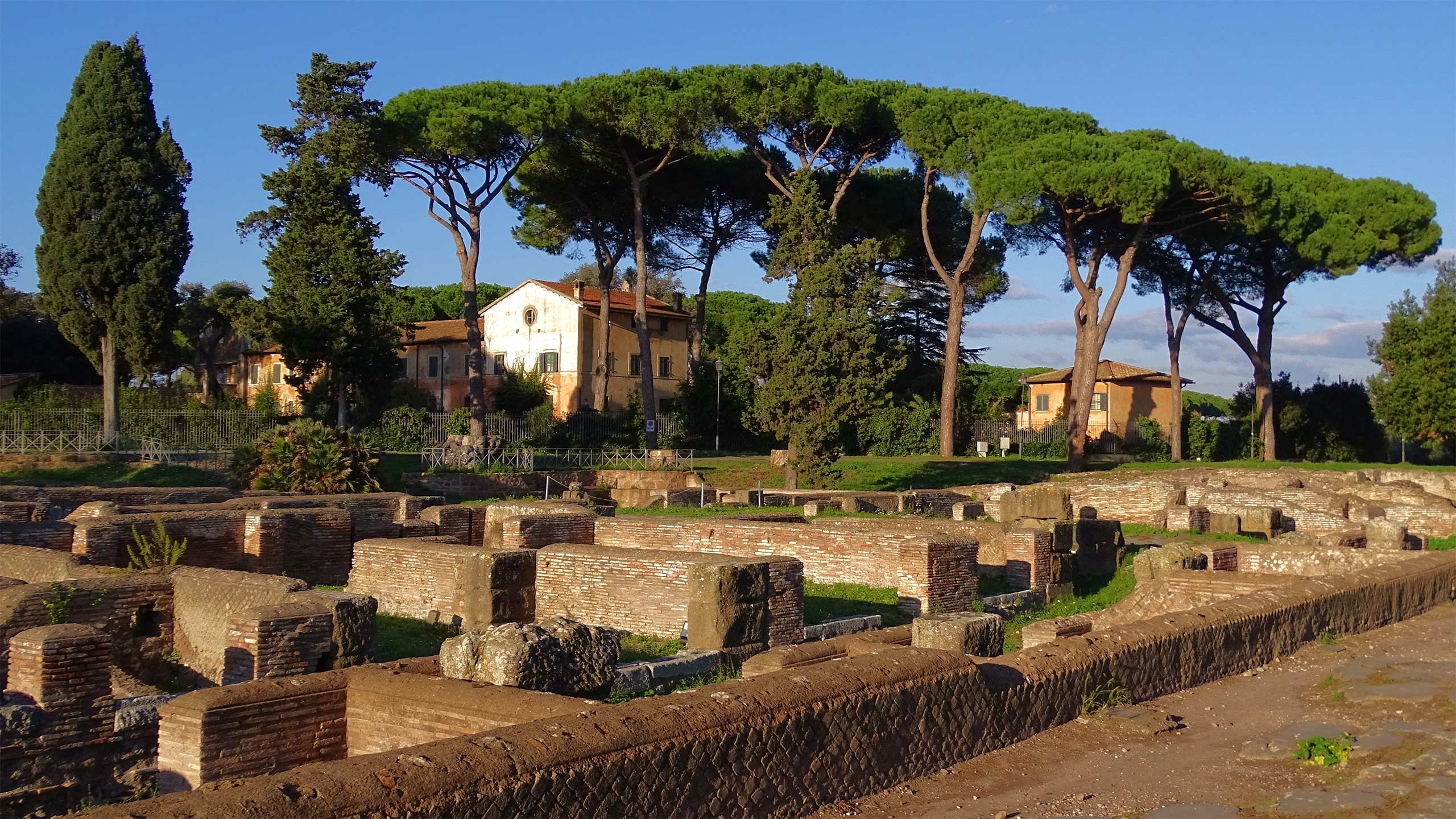 The ports of emperors Claudius and Trajan
the harbours tell the history and the life of Ostia more than any other part of it. The port built by Emperor Claudius near Ostia supported the river one, and that in Pozzuoli provided grain to Rome. The port was enlightened by a marvellous lighthouse by night, very similar to that in Alexandria, according to the historians; unfortunately, there are no remains of it. Later on, Trajan made Ostia an even more important port, as was acknowledged as "harbour of Rome" - "portus Romae" -, emphasizing the vital importance it had for the city. Near the ports, there is the area of the ancient Roman captaincy, currently called the "hill of Monte Giulio", whose particularity - in addition to the deposits of goods - is the presence of the thermal baths, evidence of how lively the site was, and of the permanent presence of Roman people there.

The Necropolis
the site houses about 200 funeral buildings are articulated on two levels. The Latin inscriptions and the drawings on the walls make you very clearly understand the type of remains contained inside: of a merchant or a doctor, a midwife or a craftsman. By the investigation about of necropolis, we can have a clear idea of the ancient inhabitants of the area: no rich patricians, but merchants and artisans, members of the middle class who have contributed to make great Rome in a decisive way.