Eating in Rome: influences on the traditional Roman food

The traditional Roman food represents the true soul of the city: genuine, rustic and simple, made of simple and "poor" ingredients. You do not have to go too far in the past, to food the origins of the most famous Roman dishes: the result of culinary influences - mostly Spanish and Jewish - a few people would expect. They are mixtures born in the districts of the typical roman "borgata", made of history, people and trades such as the butchers, supporters of the majority of the second typical Roman dishes.
Visiting Rome does not mean only to admire monuments and to enjoy architectural: the city can be discovered also through its most famous dishes, in a typical tavern, tasting dishes such as the "coda alla vaccinara", the Jewish artichokes, the tripe or the "pajata", the "pasta cacio e pepe" and the "gnocchi alla Romana".
It is not a case if one of the most popular mottos - common also in the current #hashtags - comes from Rome: "On Thursday gnocchi" - alla Romana recipe, obviously! - "On Friday: fish" and "On Saturday: tripe", talking about the daily menu immediately after World War II. On Thursday, they actually used to fill in their stomach eating the nourishing "gnocchi"; on Friday, they used to respect the religious day eating fish, and on Saturday, they finally ate meat again, an exclusive dish.

Roman frood: Jewish influences and mixes
A few people know the Roman traditional food inherited many of its most typical dishes to the Jewish and Spanish tradition. The Spanish tradition influenced the Roman food because of the great presence of Spanish Jewish people moved in the ghetto during the Renaissance, whereas the Jewish one left its signs because of its settlement in the Italian capital, at the beginning of the 2nd century B.C. 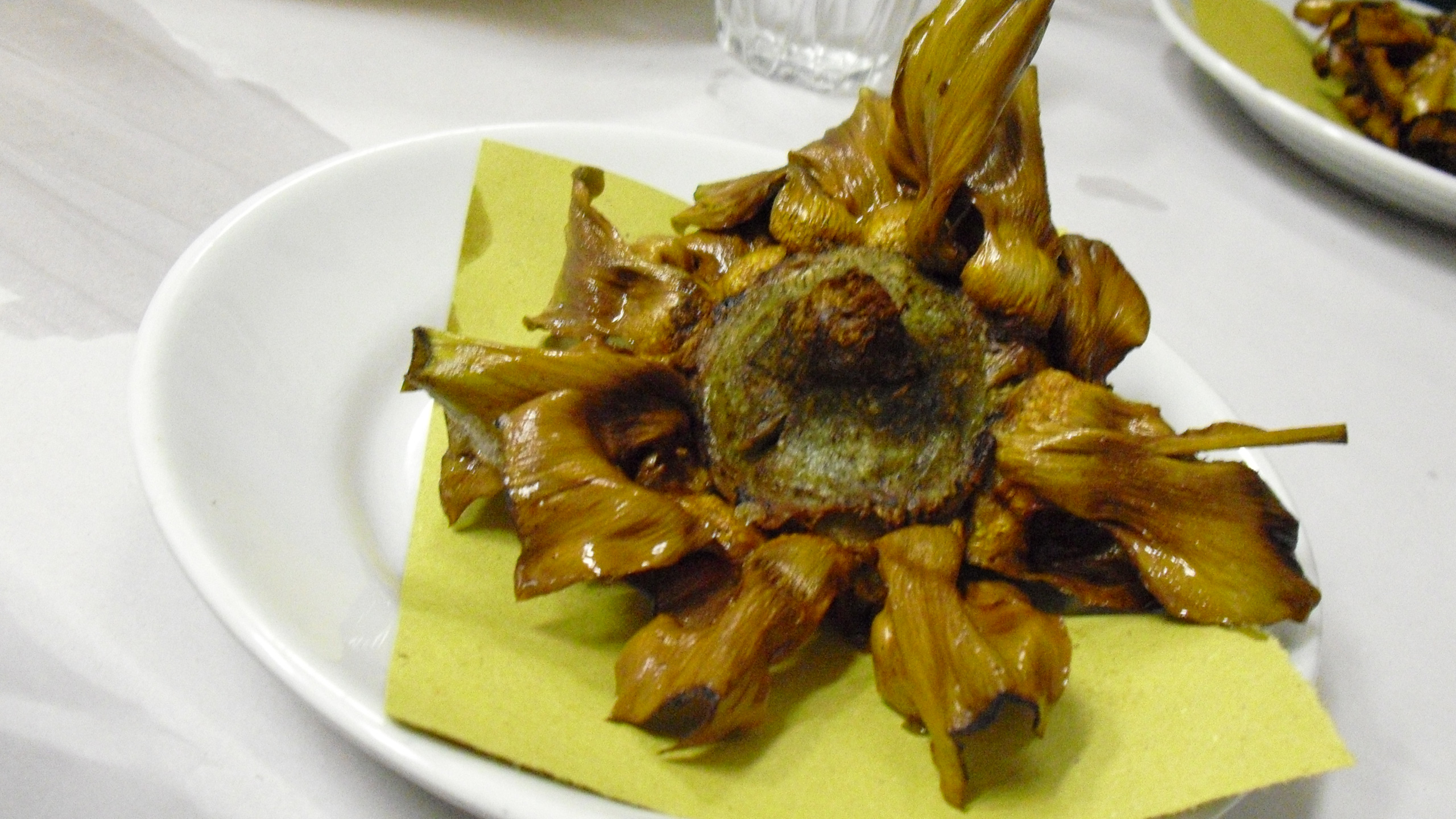 The Jewish artichoke, the use of offal and anchovies, blue fish and cod are just some examples of the Spanish Jewish influence in the Roman cuisine. The mix of ingredients - the most typical ones of the Roman tradition - combined with typically Jewish and Spanish cooking methods - frying or the use of bovine waste, for example - influenced the Roman cuisine.
The exclusive use of olive oil for frying food - only for noble Roman people in the past - became a habit thanks to the use Jewish citizens used to have in the Ghetto. This custom brought to the creation of a dish now symbol of this fusion: the "carciofi alla giudia", the Jewish artichokes. Rounded and definitely tender artichokes, seasoned and fried in olive oil.
The Jewish influence can be also found in the fried flowers of zucchini - filled in with grated bread, anchovies and parsley - and in the fried cod. The fish is not a typical Roman dish, as it is more oriented to the use of meat. The typical anchovies and endive tart is an example of the Jewish-Roman gastronomy: when, at the end of 1600s, the Jewish people living in the Ghetto got imposed to consume only poor food, anchovies and sardines became part of the daily menu.
Even some traditional desserts recall Eastern and Mediterranean influences by the use of ingredients such as honey and dried fruit. Some examples? The "tortolicchio" - a dessert made of almonds and honey -, and the "pangiallo" and "panpepato" made of candied citrus zests, pine nuts, almonds, sweet and aromatic thanks to honey and cinnamon.

Also the surrounding regions - Umbria and Abruzzo - have influenced the Roman cuisine. The Roman culinary tradition is mostly made of first courses, such as the "pasta all'amatriciana", or the "gricia" coming from Amatrice, a Lazio little town situated along the borders of Abruzzo. And what about the traditional recipe of the "saltimbocca alla romana"?
The origins of this dish seem to be from Brescia, in the Northern Italy, but the famous slices of calf with ham and sage browned in butter and white wine have acquired a very important value in Rome, and its origin seems to be lost.

Rome neighbourhoods: where the traditional Roman cuisine was born
If you're planning a trip of the Eternal City, you can't miss a gastronomic tour among the taverns and typical Roman restaurants. The truly original Roman culinary tradition was actually born in the genuine neighbourhoods where simple ingredients and unique taste characterise the food.
Although the different geographical origins of the Roman community members have influenced some of the most typical dishes, we should others famous ones were actually born in the city itself. In this culinary history, an important role is played by Testaccio district, where the Mattatoio was set in 1891.
The majority of butchers were there, selling the most valuable parts of the bovine, used to sell also the remains of the animal: so here you are the origins of the famous "quinto quarto". It was made of offal, tongue, liverthe tripe, kidneys, tail and much more, sold for a cheap price in the "osterie" situated near Monte dei Cocci.
The cooks of the taverns had to learn to enhance these parts of the animals, slowly cooking them, together with herbs, and spices. Some of the most important Roman dishes come from this habit, such as the "trippa alla Romana", the "animelle fritte" - fried sweetbread - the "coda alla vaccinara" - the tale - and the "rigatoni con la pajata" - a typical type of pasta with offal.
The Mattatoio of Testaccio - the slaughterhouse -, dismissed from 1975, represents the point of departure of a culinary experience made of strong and intense flavours. This is the reason why In the district there are many taverns offering these traditional dishes, even today. You can taste the good dishes of traditional Roman cuisine even in the neighbourhoods of Garbatella - in a typical club called "fraschetta" - and in the heart of Trastevere, where prices for tourists are enough cheap and the quality of the dishes is excellent.
If you want to try the fusion between Roman and Spanish-Jewish cuisine, we suggest you to go to the Jewish district, the Ghetto. It is situated the Lungotevere de' Cenci, in front of the Tiberina island.