Walking along Michelangelo's footprints: works and fun facts about the famous artist from Arezzo

Michelangelo Buonarroti is considered the symbol of the Italian Renaissance. He was a 360° artist, as he was not just a painter, but also a sculptor, architect and poet, being excellent in any field. The artist from Arezzo focused his activity on the constant research of an ideal beauty, and he was defined a genius and troubled man, as well as the uncontested protagonist of the art of that period. Let's follow his footsteps discovering some fun facts about his work and his life.

The origins
He was born on March the 6th 1475 in Caprese, near Arezzo, and his artistic skills where clear since his youth, even if his father tried to limit him.
After his mother death, he met the Italian painter Francesco Granacci, the one who supported him in developing his passion: drawing.
In 1487, Michelangelo entered the atelier of Domenico Bigordi, alias "il Ghirlandaio". Probably, Michelangelo's father himself - Ludovico - brought him there to decrease the expenses he had to pay for his numerous children. He spent there almost one year, but that experience made him learning a very important painting technique.
Despite he was very young, he was actually charged with numerous commitments, more important than the preparation of colours or colouring parts of the works. Some historians suppose he took part to the creation of the "Christ baptism" and the "Presentation at the temple", but we don't have any evidences about it, unfortunately. However, he surely showed a very important interest in Giotto and Masaccio, famous masters of the Florence school, coping some of the frescoes.

At the "Giardino di San Marco"
He the most important time of his education in the "Giardino di San Marco", artistic academy supported by Lorenzo il Magnifico, where talents could study the techniques and the works, coping the collections of the family, supported by the sculptor Bertoldo. In Lorenzo il Magnifico's residence, he had the opportunity to meet the most important people of the time, such as Pico della Mirandola and Poliziano.
During this period, he made the "Madonna della scala" and the "Battaglia dei Centauri", two very different works of art, representing two different themes - holy and profane -, characterised by two different techniques - low-relief and high-relief. However, the two paintings are the evidence of the influence Donatello had on Michelangelo's art.

The trip in Bologna
In 1492, Lorenzo il Magnifico died, and we still don't know if Michelangelo went on living there or he went back home. However, before the fall of the family and the arrival of Carl VIII in Florence, he decided to move to Bologna, in order to escape from the problems the city was living. In Bologna, he made the "Arca di San Domenico", improved his skills, and discovered other artists.

The Roman period works: "Bacco"
In 1496, he finally moved to wrong thanks to an invitation by Cardinal Raffaele Riario; the cardinal asked him if he was able to remake one of the works of his sculptures collection. Michelangelo began to create "Bacco", at Marble work today at the Museo del Bargello, in Florence. The work represents a drunk adolescent, and a child stealing some grapes from his hands. The sculpture is extraordinary expressive and flexible, something very original for the time.

The Pietà
After “Bacco”, he was committed to realise the work that made him famous in Rome, giving a body to his spirituality: The “Pietà”, the statue representing the holy Mary hanging her sun in her arms. Today it is in St Peter's Basilica in Rome. Michelangelo made it of Carrara marble, when he was just 22 years old. This peculiar type of marble became his raw material for all the following works. The “Pietà” demonstrates his great capacities: it was the first time bodies had a natural and soft pose, dynamic and elegant at the same time, even being just sculptures. 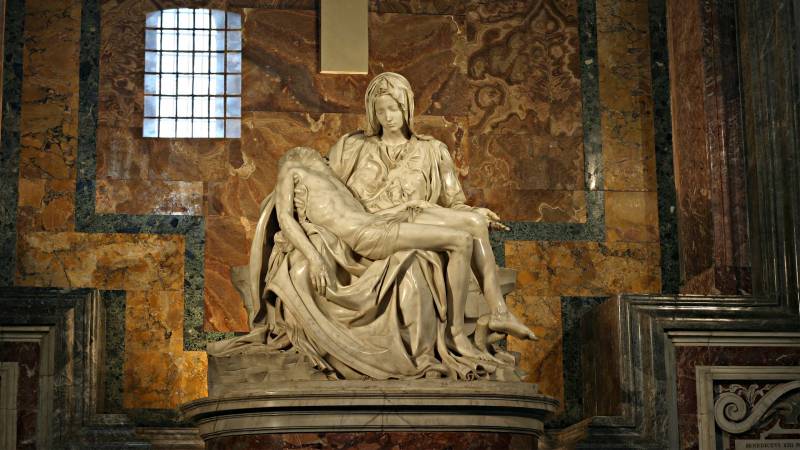 Back in Florence
In 1501, Michelangelo went back to Florence, where he produced a lot of works of art. He was commissioned the realisation of the “David”, one of the most famous works all over the world, as the perfect idea of male beauty. The “David” represents the theme of the Bible hero, portraying a young, naked and apparently quiet man, ready to act.
"Tondo Doni" was made during the same period, it is a painting characterised by lively colours, representing the Holy Family. This work created the basis for the period called Mannerism. The painting is connected to a fun fact: after the delivery, the customer wanted to pay the artist less than they had agreed. Michelangelo was terribly angry and he asked for the double. And so? The client finally had to pay a lot of money to get the work.

Back in Rome
In 1504, the artist was called by Julius II in Rome, to be charged of his funeral monument, the “Moses”, never completed because of the contrasts between them and the with the Pope' successors. At the time, his fame was incredible, and in 1508 he started the decoration of the Sistine Chapel. Despite the artist was more addicted to sculpture, he completed the work into the dead line. Goethe - the famous writer - describes the work in the following way: "you can't know what a man is able to do, if you have never seen the Sistine Chapel".
Settled in Rome in 1534, he began "The Last Judgment", the fresco representing the last Coming of Christ, to inaugurate the new God reign. The masterpiece is celebrated and appreciated all over the world, and it represents the end of a period in which the Renaissance man - strong and self-confident – became a victim of his uncertainties.

The last works
Subsequently, Michelangelo dedicated himself to the frescoes in Paolina Chapel, to the restoration of Piazza del Campidoglio, to Palazzo Farnese, and to the project and realisation of St Peter's Basilica. The "Pietà Rondanini" is his last marble sculpture: he had been working on it until a few days before his death.
Michelangelo died at the age of 89 years, in 1564. Even If he was a very appreciated person, people say he was a very troubled men, always looking for a sublime penans only art could give him. He declared to be just a sculptor, but the quality of his architectural and pictorial works were not inferior at all.