Travel guide to the local markets in Rome

Travel guide to the local markets in Rome Rome is not made of archaeological sites and museums only. One of the things featuring it is the presence of local markets. They are the soul of city life, each district has its own market, characterizing its history and culture.
As well as the city, markets evolve themselves, too. They are not a black and white movies, they are always in evolution.

The local markets of Rome are several, and we’ll offer you a list of the ones you can meet.

The Esquilino market (ex Piazza Vittorio)
The Esquilino market is Situated in the district with the same name, in the Square designed by Gaetano Koch, become famous thanks to the movie Ladri di biciclette. The market was created at the end of the 19th century. It used to sell food, but also tobacco and spare parts.
The market went on working until the 90s, when it got moved in the covered area of Via Turati, where it is currently situated. It is the symbol of the cultural change of Rome: you will not find chicken and tobacco anymore, but a multi-ethnic market, where you can buy Indian clothes, halal meat, and products and spices mysterious until a few time ago.
It is famous all over the city because it is very cheap, and it is open from Mondays to Saturdays, from 5 am to 3 pm If you travel by car, you can park it in the underground parking next to the market.

The local market of Campo de ' Fiori
The Campo de 'Fiori market is Situated in the middle of Parione and Regola districts, and it took its name because before becoming a square, Campo de' Fiori was a green flowered field. It was created in the middle of the 19th century, and it used to sell only fruit and vegetables, imported by the farmers of the areas nearby. By the time, it started selling also meat and fish.
The best part of the market is in the internal area where the typical Roman products are sold, advertised by the typical vendors expressions: artichokes, meat and cheese; the external area is dedicated to tourists.
If you want to experience the atmosphere of the famous movie "Campo de' Fiori", interpreted by the Great Anna Magnani, we just have to reach the heart of the market period the area of the square in the evening becomes magic thanks to the several clubs it hosts.
This market is open from Monday to Saturday, from 7am to 2 pm. It is easily accessible by public transport. 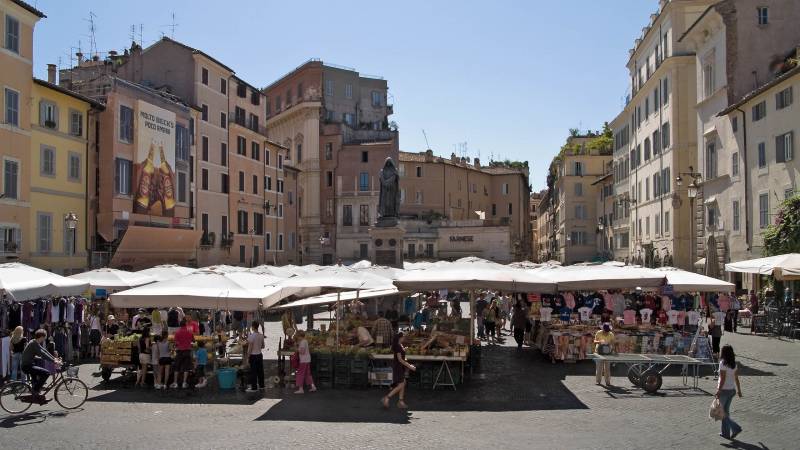 The Testaccio market
The new Testaccio market has been inaugurated during the last years, in Via Galvani, not far from the underground stop - Piramide.
It is a huge market where you can find anything you need, such as food, but also clothes, books, and products for your house. It is very peculiar because of its size: its surface is more than 3000 square metres. In addition to shopping, you can actually taste some good food: a fruit salad, but also sausages and sandwiches. Some stands also sell pasta or anything else, in order to let you taste street food.
If you travel by car, you can park it in an underground parking. There are four market entrances: Via Franklin, Via Manuzio, Via Galvani and Via Ghiberti. You'll find it open from 6am to 2pm.

The local market Monti
Located in Monti district, one of the most typical Once in Rome, not far from the Fori Imperiali, it is still unknown by tourists, but it really is worth of a visit.
Until a few years ago, it seems it was going to be closed, but thanks to the strength of the vendors, it is gaining life again.
You can currently find stands selling toys and any kind of products, together with fruit, vegetables, and meat. The first three Sundays and the last Saturday of the month the market hosts artists taking part to the Urban Street Market project.
Vintage clothes, vinyls, handmade fashion jewelries, you will surely get a deal. Open from Monday to Saturday from 6am to 2pm, and on Tuesdays and Fridays open till until 7pm.

Parioli Market
Situated in the famous Parioli district, this local market probably is one of the most modern in the city. Following the European trend, it has turned into a live market.
During the day, you can do shopping, and after 11pm vendors become famous cooks offering you good food to be tasted, followed by ice-creams and cocktails, the best way to taste the Roman street food. There are also some stands selling homemade beers, even more famous and appreciated in our country.

Local market Trionfale
In the district with the same name, Trionfale is the first in Rome. It was situated in a strategic position for travelers coming from the countryside and stopping there for supplies. At the entrance, you will find the historical merchants, some of them there since the beginning of the 20th century.
The market is divided into lanes, according to the goods: fruits, vegetables, organic products, but also American meat, chestnuts and preparations of every kind. It is situated just a few steps from the Vatican City, in order you can spend a great cultural day. Open from Monday to Saturday from 6 am to 2 pm, and on Tuesdays and Fridays open till until 7pm.

Porta Portese market
Surely the most famous market in Italy, it has been the set of several movies. You'll find it open every Sunday from 6am to 2pm, but some stands until 5pm.
It is situated along the banks of the Tiber, easily accessible by public transport.
As it is very busy, we suggest you not to visit it during the peak hours, but early in the morning it is ideal. At Porta Portese, you can really find everything, not just the goods, but the soul of a Roman local market.