The true story of the Bocca della Verità

The Bocca della Verità is one of the most famous symbols of Rome, even if not everyone knows its history, and very few people know the origins of its name. One thing is sure: if you are busy think the capital of Italy, after having visited the power sites of the Ancient Rome and all the other important monuments of the Eternal City, you can't miss the Bocca della Verità, a work very important for all the Roman citizens.
As well as the Colosseum, Fontana di Trevi, Piazza San Pietro, and the Pantheon are famous for being incredibly beautiful monuments, the Bocca della Verità is famous thanks to the several legends talking about it. How about its origins, and how long has it been there? The Bocca della Verità is a big mask made of marble, just one piece of stone in the wall of Santa Maria in Cosmedin church in Rome, situated in the square with the same name.
It is situated there since 1632, and it represents a bearded face, on which the nose, the eyes, and the mouth are holes. By the time, historians and archaeologists have tried to interpret the value of the Mask, but there are several interpretations about it. Some of them say it represents god Ocean, or Jupiter Ammon, a faun and an oracle.

The true story of the Bocca della Verità
The Bocca della Verità is situated on the wall of Santa Maria in Cosmedin church, since the beginning of the seventeenth century. During the Roman age, this mysterious mask was just a sewer cover. For this reason, several historians have connected it to the water divinities. In the ancient Rome, the sewer covers actually represented water and river divinities, drinking the rain, letting the water flow to the sea.
However, this is not the only one explanation the historians gave about it: somebody says it was the top of the holy spring situated in front of Mercury temple, where the Roman merchants used to swear their honesty during their trades.
This assumption is confirmed by the famous legend from the Middle Ages, according to which all the people telling a lie keeping the hand into the mouth of the mask would have lost it, eaten by the terrible mouth. Well, even if the origins are still a little bit mysterious nowadays, we perfectly know it was legendary famous: several people think it was quoted in the Mirabilia Urbis Romae - the Pilgrims' guide of the city -, telling the it was able to make oracles, in the 11th century. Another important document published in the third century tells about a trick made to Emperor Julian. According to the document, the emperor was intentioned to reestablish Paganism. According to the story, the devil was behind the Bocca della Verità; he introduced himself saying he was Mercury, who used to protect by tricks.
The emperor put his hand in the mouth, but as he was guilty of having cheated a woman, the devil ate it, and he promised him a great award if he would have been able to reestablish paganism. Another legend tells the Bocca della Verità was made by Virgilio Grammatico, a very clever man lived during the 6th century, expert in magic arts. He commissioned the mask to discover the traitors. The legend was confirmed by some documents from the 15th century, by some Italian and German travelers.

Another legend from Germany, dating back to the 15th century, tells the Bocca della Verità didn't beat the hand of a Roman emperor, even if she was guilty. This story is connected to another famous mediaeval legend, probably confirming it.
A young woman, led by her suspicious husband to the Bocca della Verità, was able to save her hand: she asked to her husband to go in the middle of the square and pretend to be mad, hugging her in front of the crowd. He did it, so when she put the hand into the mouth, she swore only her husband and the man who came on that day to visit her had hugged her. Being the truth, the woman survived the test, even though she had really committed adultery.
The first name of the Bocca della Verità appeared in a document from 1485: from that moment on, it has been one of the most famous works in Rome. We have also discovered it was situated in another place at the beginning, and that Pope Urban VIII order to move it under the portico in 1631. 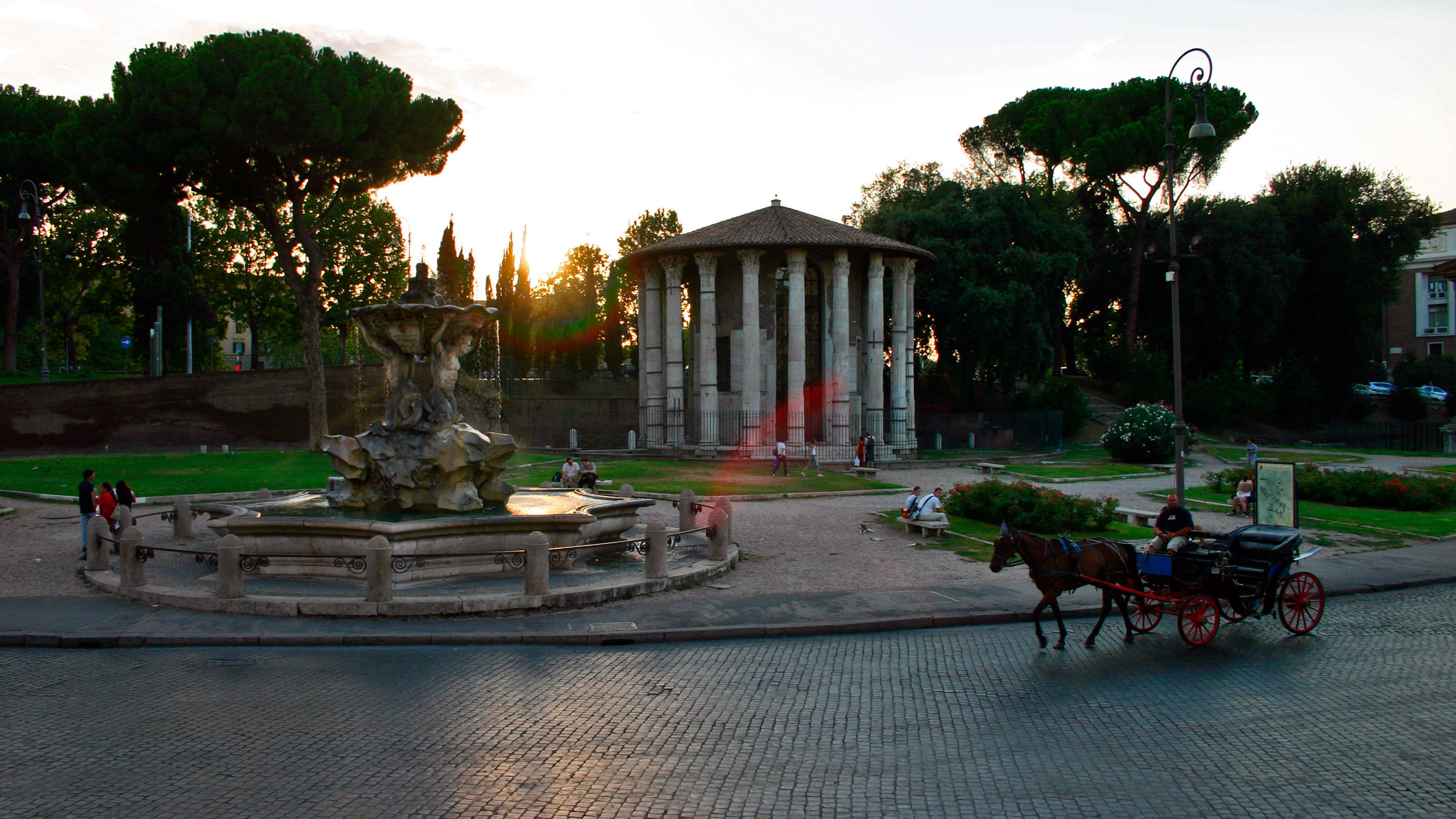 Piazza della Bocca della Verità
The square is situated between Via della Greca and Via Luigi Petroselli, in Ripa district, where the Foro Boario was situated, in front of the Tiberina island. The mask was probably put on the external walls of Santa Maria in Cosmedin church even before the 15th century, so the square took its name. In addition to the Christian temple, built in the late Middle Ages, the square hosts other monuments deserving a visit: the Arco degli Argentari, rich in decorations, the Arco di Giano - 16 metres high, decorated by several recesses, probably hosting the same quantity of statues -, the Tempio di Ercole - with a circular shape that made it be similar to the Temple of Vesta -, and the Tempio di Portuno - a goddess related to the river harbour near there.
In front of the temples, there is also the so-called Fontana dei Tritoni, designed by Carlo Bizzaccheri by the will of Pope Clement XI, situated in the middle of the square since the beginning of the 18th century. It has an octagonal basis and represents two tritons supporting a large shell pouring water. In the past, the fountain was famous because of the capital condemnations taking place next to it (until 1868).