The grotesque corners of the Domus Aurea: strange beings, monsters and chimeras portraits surrounded by geometrical and natural decorations

The Domus Aurea was the urban residence built by Emperor Nero after the big fire in 64 A.D., causing the destruction of the city centre. After this terrible event, the “princeps” expropriated an area more than 80 hectares large, to build an incredibly big palace, extending from the Esquilino to the Palatino hill. Because of its dimension and richness of the materials they used, the residence has never been completed, and then finally destroyed after the emperor's death, to give the area back to the Roman people. What you can still see of the Domus Aurea was declared world heritage by the UNESCO, in 1980. The Domus Aurea wasn't designed to be just one building, but a group of different palaces and green areas, lately inspiration for the architects who built the great Villa Adriana in Tivoli.

The architecture of the Domus Aurea
What you can still see of the then narrow residents is the nucleus situated on Oppio hill, made of more than 150 rooms, all of them situated around a big octagonal room, focus of the whole building. In the western area, there were some of the most famous rooms: the Sala della volta delle civette and the Ninfeo di Ulisse e Polifemo, the latter taking its name by the mosaic in the centre of the arch. In the Eastern area, there is the Sala di Achille a Sciro, the Sala della volta dorata - decorated by multi-coloured stuccoes -, and the Sala di Ettore e Andromaca. The absence of latrines, doors, heating systems and storages would exclude residential purposes for this Pavilion, reserved to leisure and recreation of the emperor and his guests, where to relax themselves in an extraordinarily rich in works of art and natural beauties environment.
The designers were inspired by the seaside residence situated in the area of the current Campania region, characterised by buildings far from another, and decorated by several porticos and garden. Probably, the famous summer destination Baia, where several luxury residences were built during the Roman period, was the real inspiration. The architects who designed the Domus Aurea decided to set the residence in front of an artificial lake - the stagnum - to simulate the sea, where several rich events and parties used to take place on the boats. Suetonius told it was decorated by precious metals and stones: the roof of the living rooms was made of ivory panels, and the main room used to rotate around itself as the earth does. Martial was complaining about a single house occupied the entire city.
The entrance located on the Palatine sides accessed to the “Vestibulum”, the courtyard entrance, the main one of the Domus Aurea. To embellish it, Nero ordered a colossal bronze statue, 35 metres high, portraying himself in the likeness of the Sun-God Apollo. The statue was clearly inspired by the Colossus of Rhodes, with its right arm leaning forward and the left holding a globe. Afterwards, the it was changed, decorated by the face of the various emperors, until it was destroyed by the Goths.
The pond was created in the valley between the Celio, the Oppio and the Velia. Nero ordered to build several buildings around the pond, so that Suetonius compared it to a sea surrounded by a city. Vespasian then drained the basin and built the Flavian Amphitheatre on it. 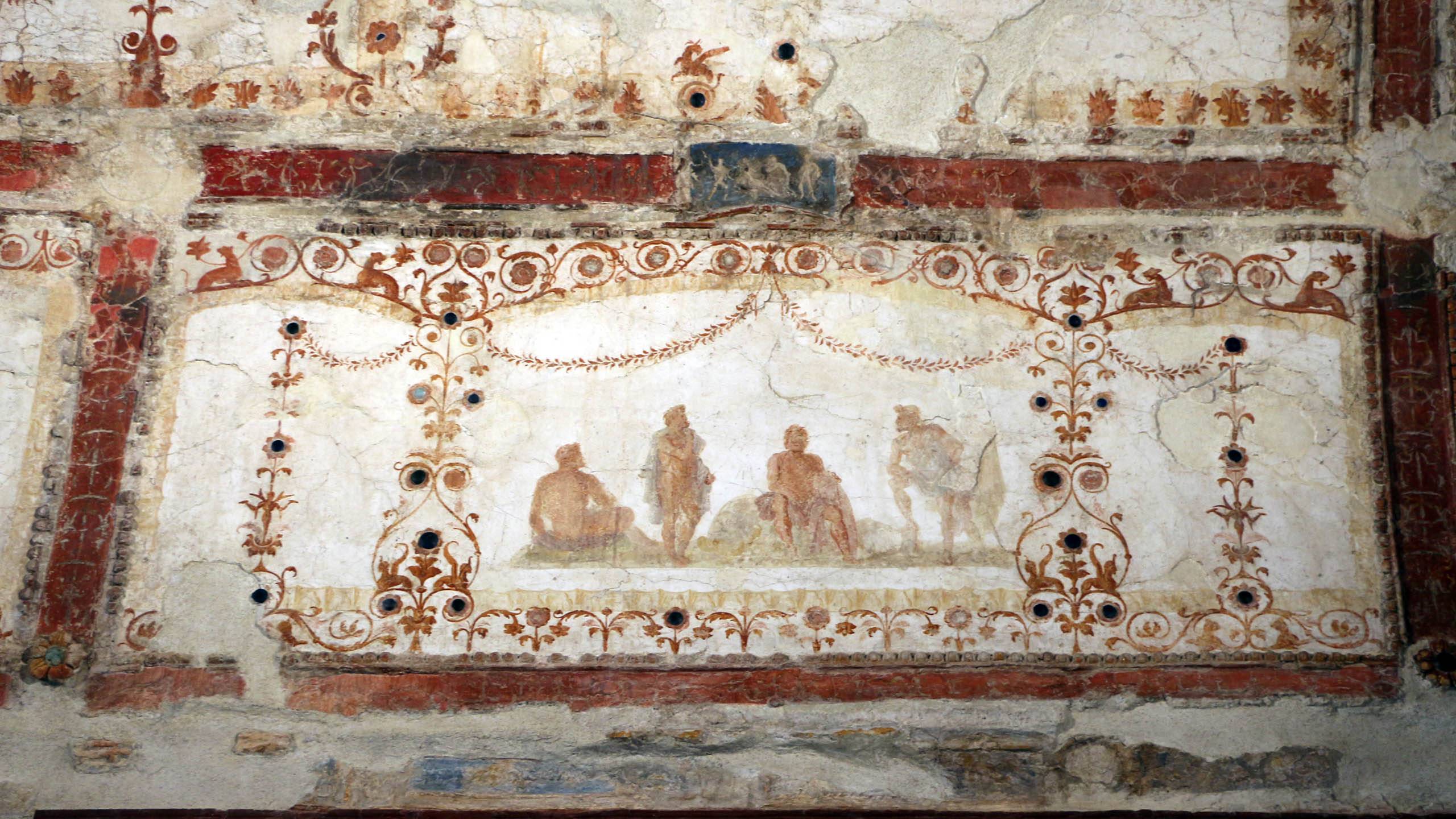 The decorations of the residence
The decoration and the paintings on the walls of the Domus Aurea are fomous thanks to Fabullus, the artist famous for his austere style, and his dark colours, such as red, blue, green, indigo, and cinnabar. The frescoes decorate all the internal walls, especially the corridors, while the main rooms are decorated by marble and stuccoes.
The decorations come from the 4th Pompeian style, inspired to the theatre masks and scenography, so rich in peculiar images and fantastic animals. The characters depicted show the interest for the Greek events and they probably are a homage paid to the city that offered the roots to Rome and to the Julius-Claudius gens. At the end of the 15th century, it is said a man fell into a hole in the Oppio hill, inside a strange cave, full of grotesque figures, monsters and chimeras, lately become typical symbols of the Renaissance. Many famous tourist visited the caves: the Marquis de Sade, Giacomo Casanova, Domenico Ghirlandaio and Filippino Lippi. These strange decorations had a very strong effect on the Renaissance artists, as you can see observing the decoration of the Vatican lodges by Raffaello.
The grotesque decoration - as the Italian expert Vasari defined it, "a grottesca" - is characterized by the depiction of monsters and hybrid characters, often represented as a mix of different figures, surrounded by natural or geometrical decorations, in a very symmetrical structure, on a white or one colour background. The characters represented are not connected to any specific story, but represented in a very simple and basic way.
The illustration doesn't have any educational purpose, it was probably made just for pleasure. The name of this artistic tradition so loved during the 5th and 16th century comes from the Esquilino hill caves, discovered in 1480 and literally assaulted by the artists of the time, available to go inside just to observe them. It is also said Michelangelo, Raffaello and Pinturicchio visited them, too.
After the death of Nero, the Domus Aurea was completely covered by new buildings after a few years, so it got preserved as you can see it nowadays. The sand of the foundations actually protected it by the terrible enemy of the Roman soil - humidity - so giving it to the history forever.