The elegance of the Roman Trident: via del Babuino, via del Corso and via di Ripetta

When people talk about the Roman Trident they refer to a street complex, made of three straight streets starting from Piazza del Popolo towards Piazza Venezia, creating a trident. The area is considered the historical centre of Rome, for many reasons, preserving endless wonders, such as stately houses facades, churches hosting treasures and small restaurants with picturesque tables along the narrow streets.
The three rectilinear streets, opening up like a fan, forming the Trident are: the ancient Via Lata -today we know as Via del Corso - in the centre, via Ripetta and Via del Babuino getting to two twin churches (Santa Maria dei Miracoli and Santa Maria in Montesanto), on the sides.
Just a few steps from Piazza del Popolo the great Canova bought a property to make it his home-atelier, today a prestigious local-museum and preserving works, drawings and studies of the artist. At number 18, in via del Corso, there is a museum dedicated to Goethe, where he spent two years.
The Trident is also the place to have a walk through elegant shops, jewelries and ateliers of Italian and international brands.

The starting point of the Roman Trident: Piazza del Popolo
Before leaving to discover the Roman Trident, an elegant setting admired all over the world, it is important to understand and discover its history, to better appreciate its beauty.
The starting point of the Tridente, departure point of the three roads to the south, is Piazza del Popolo. Its position is directly connected to the ancient Via Flaminia, which connected Rome to the north: anyone had to go through it, to enter Rome. Piazza del Popolo was also the place where the remains of Nero's ancestors were kept and right there, the emperor himself was buried, in a forest of poplars. Around 1100 AD, according of the people will, Pope Pasquale II ordered to remove the tomb, because it was considered the origin of evil forces. In its place was built the Basilica of Santa Maria del Popolo; the square has been more or less the same until 1655, when Gian Lorenzo Bernini was committed to rationalize the space. His project created the Trident and erected the two twin churches of Santa Maria in Montesanto and Santa Maria dei Miracoli, to highlight the beginning of the Trident.
The current structure of Piazza del Popolo was designed by Giuseppe Valadier, in the 1800s, according to neoclassical canons. The idea of the twin is repeated ad infinitum in the external decorations.
In the middle of the square the oldest Egyptian obelisk brought to Rome stands out, dating back to the time of Ramesses II. As a framework, you can see the two churches around it, timeless masterpieces, you have to visit to appreciate their beauty.
From Piazza del Popolo you can start a walk to discover the Roman Trident; where to start? It’s up to you! 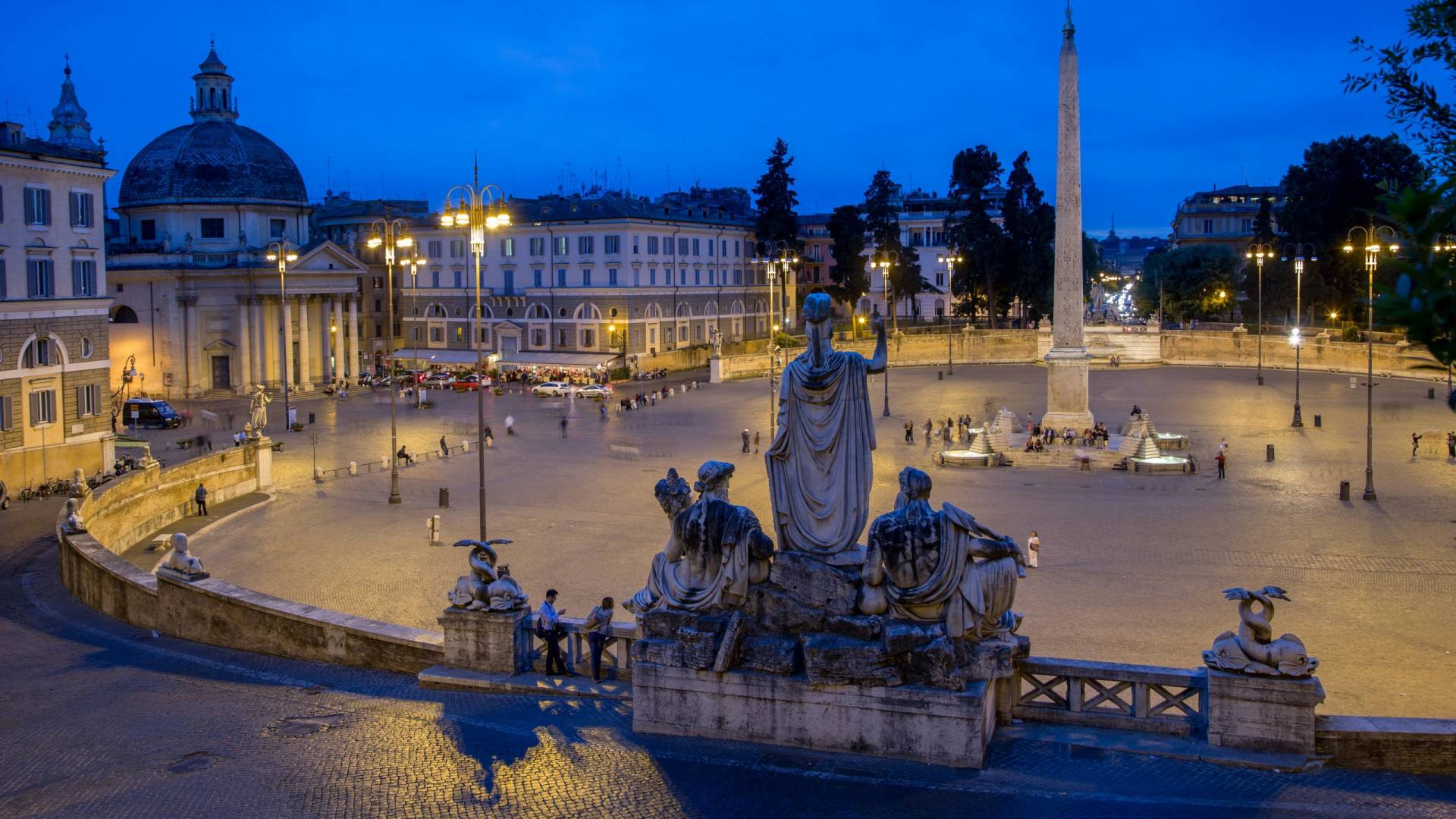 Via del Corso
Via del Corso cuts the Trident in the middle, hosting important churches and buildings, almost all currently moved into offices, except for Palazzo Doria Pamphilj, moved into a museum with garden.
The origin of the name of the street dates back to the Middle Ages, when the Berber races took place there, forbidden by the beginning of the Kingdom of Italy; the street was renamed as Corso Umberto I, but taking the original name, in 1946. It was no longer connected to races, but designed to identify a main road, as other Italian cities did, from that moment on.
Walking along Via del Corso means being carried away by the charm and the elegance of exclusive buildings and shops. At the end of the nineteenth century, the most fashionable women used to go there, where there were big shops, inspired by the French ones. The first Italian store was inaugurated there: Palazzo Bocconi, being the headquarters of the Rinascente, for years; nowadays it hosts Zara. Next to it, you can see the splendid Galleria Alberto Sordi, dedicated to the actor symbol of Rome.

Via del Babuino
Walking along Via del Babuino is a unique sensation, tasting an atmosphere of elegance and luxury. It hosts shops of prestigious brands, art and antiques galleries, and renowned hotels, too.
In the middle of Via del Babuino, there is the fountain surmounted by the statue of Silenus, called "er babuino" by the Romans. At the beginning, it was called Via Clementina, then it became Via Paolina, in the eighteenth century, and finally Via del Babuino, by the statue. Going on along the street, you get to Piazza di Spagna, an enchanting place and a symbol of Rome. Thousands of visitors come from all over the world every year to admire it and climb the steps of Trinità dei Monti. Once you reach the top of the staircase, you can admire the pastel-colored panorama of the houses, and you can see the domes of the main churches in the center of Rome.

Via di Ripetta
Via Ripetta has very ancient origins, from 29 BC, during the period of the built of the Mausoleum of Augustus.
In 1510, the street took the name of Via Leonina, from Pope Leone X Medici who gave it a new structure. The current name comes from a following event, when Pope Clement XI decided to build a new port, to distinguish it from that of Porta di Ripa Grande; he called it Ripetta, so the name began to refer to the street where it was, too. Via di Ripetta immediately became very lively, attended by port workers.
Nowadays it still saves its fascination, although it is no longer the seat of the river port; you can admire palaces that once were houses and artisan shops. At number 29, just few steps from Piazza del Popolo, you can see a rather unusual showcase that hosting an infinite number of dolls. It is the headquarters of the unique Ospedale delle Bambole, which for over seventy years has been fixing dolls, stacking pieces of them in its showcases.