The Basilica of San Clemente and its underground: a secret place, hiding a source of water

The Basilica di San Clemente, dedicated to Pope Clement I, is situated between Celio and Esquilino hills, in Monti district. The church you can see nowadays was built and consecrated during the 12th century, and it is connected to the Dominican convent, situated next to it.
The importance of the building is a consequence of its position too, built on some previous buildings underground. The oldest level underground dates back to the first century AD, the Imperial age.
These structures were discovered and excavated in 1857, by the will of the then prior of the convent. The two underground levels were investigated and consolidated, and it has become possible to visit them from a few years, in order to take advantage of the beauties it contains. It is rich in architectural, historical, and artistic elements about the Christian age, making it a very important and one-of-a-kind monument of the Roman history.

The modern basilica
The modern basilica was built and consecrated in the 12th century. According to some documents, we have discovered Pope Pasquale II - cardinal from 1076 to 1099 - became Pope in the new basilica, after its consideration. The ancient building was partially demolished and buried for a depth of about four meters, and the oldest structures were used as foundations for the new basilica.
The old church was demolished due to its bad conditions, and to the ruins left by the fire the Norman troops caused, in 1084 (during the famous Sack of Rome).
It got its current aspect after the restoration of 1713- 1719, ordered by Pope Clemente XI. The works were entrusted to the architect Carlo Stefano Fontana, nephew of the famous Domenico Fontana. He was the designer of the current facade - a very elegant one -, completed in 1716.
Above the arches of the portico, there is a big window with the shape of a round-arch with two lesens, with a bell tower next to the main structure, decorated by a Baroque style, completed in the eighteenth century.

The ancient basilica
At the end of the third century AD, the upper floor of the "horreum" - the store made to serve the area of the Ludi, situated nearby, and created during the first century around the Colosseum - was demolished, to build a private residence for a patrician family.
Some documents about the time let us thinking it was a place where Christian people used to meet to pray together.
In the following years, the building got modified several times, becoming completely different. In the fourth century, it had already been restored and moved into a little Christian basilica, characterized by three internal naves and one apse.
The latter, located next to the horreum, was situated in an insula, a large room divided into many apartments around a large central courtyard, made of opus latericium, built in the 1st century. In the inner courtyard, between the end of the second and the beginning of the third century, the Mythraeum was built: it was a little temple, dedicated to God Mithra, an Eastern belief important in Rome, by some troops from Asia Minor.
Inside the Mithraeum, a statue of the good Shepherd was found. In the ancient basilica, near the western end of the Southern nave, it said there were Saint Cirillo remains: he was famous for having started the Christian conversion of the Slavic people, and for having moved St Clemente remains from Crimea. 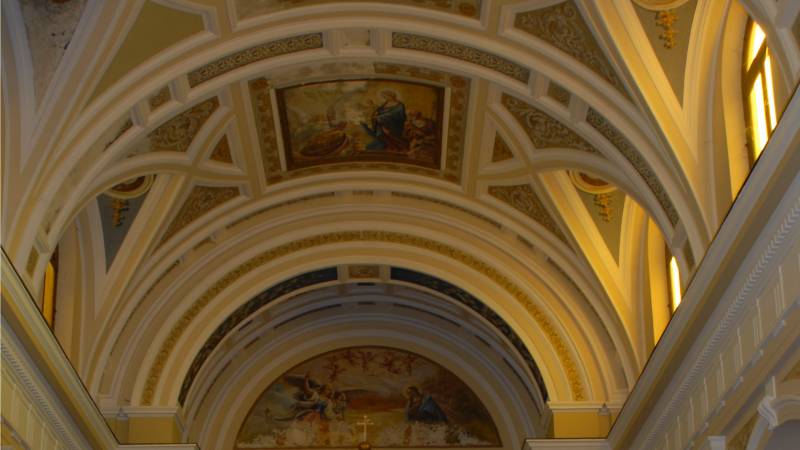 The underground
The previous basilica of San Clemente, currently situated under the modern one, still preserves some of the wonderful frescoes from the 9th, 10th, and 11th centuries. In the middle of the 9th century, the paintings representing Pope Leone IV were made, followed by the stories about Saint Clemente and Saint Alessio, dating back a few years before the final abandonment of the church.
Recent excavations, currently in progress, have revealed even a small early Christian baptistery (now accessible by archaeologists only) and a fresco, representing the Holy Mother and the child. The catacombs complex is very interesting too, even if it is very small, it has offered a lot of important information for historians.
It is a gallery surrounded by sepulchers from the 5th century BC. During the underground walk, you can admire a little the brands of the Labicano, the torrent feeding the area of the Colosseum, in the swamps of Velabrum Maius - where you can currently see the churches of Maria in Cosmedin, and San Giorgio al Velabro. 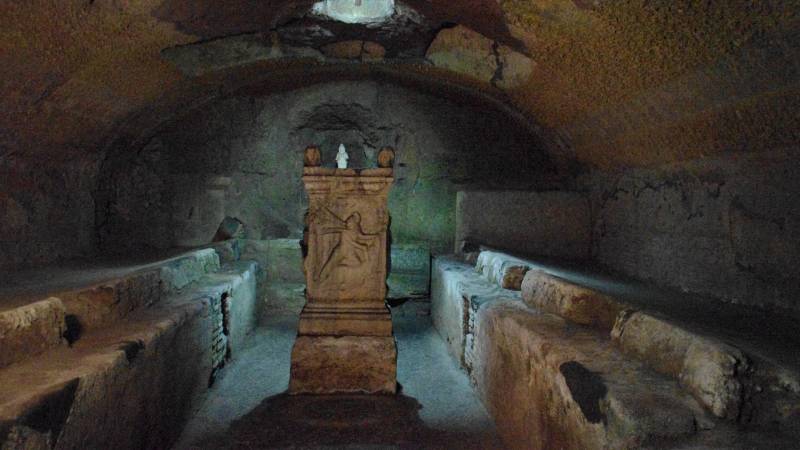 Sisinnius' inscription
One of the frescoes situated in the lower level of the complex tells the Legend about Sisinnius, prefect of Rome: he decided to investigate on his wife because he didn't trust her.
His wife Theodora had actually become a Christian follower, and Sisinnius discovered her entering into a catacomb, to take part to a mass, celebrated by Pope Clemente.
He got so angry, he reached her to stop her, but he suddenly became blind. Sisinnius got his sight back just by the Pope intercession, but the prefect ordered to catch him, instead of being thankful.
The legend tells the soldiers weren't able to catch the Pope because they imprisoned a column instead of him. There is a fresco telling this story, with some of the most ancient inscriptions ever translated into an intermediate language between Latin and vernacular.
The inscription, dating back 1080-1100, is the most ancient temple or a vernacular Italic language used for artistic purposes. The fresco is located in the basilica, and it shows, like a comic strip, the following expressions: "Fili de le pute, traite, Gosmari, Albertel, traite!" In the first sentence, shouted by Sisinnio to his soldiers, San Clemente answers to: "Duritiam cordis vestri, saxa Tan meruistis", meaning: "Because of the hardness of your heart, you deserved to drag stones".