Shopping in Rome. Galleria Alberto Sordi: a jump into fashion

Italy has always been acknowledged as an ideal destination for combining culture and art, but also history, food and wine and, why not, the beauty of landscapes with the richness of the territory. It could almost be superfluous to mention the renowned reputation of great fashion and manufacturing of companies often putting their craft skills at the service of the customer. However, nowadays more and more cities are establishing shopping tourist centres, often luxurious ones! Rome is a wonder and woe betide you if you deny it: it has always been named "the Eternal City" to bring back to the common imagination its magnificent and imposing appearance, the result of a millenary history that, over the centuries, has led it to be the centre of the world.

Where to find an accommodation?
In a tourist city like Rome, the offer of accommodation facilities is not lacking, ranging from hostels, small cheap hotels, up to the big luxury hotels. In short, whatever the budget available for a stay in Rome is, anyone will be able to find the most cheap and advantageous solution based on their needs. The choice of accommodation depends on the setting you choose for the holiday, the available budget and personal preferences. If you choose to stay near Piazza Navona, you can immerse yourself in a succession of palaces, churches, museums and fountains, from the most famous Trevi Fountain to the enchanting Fontana delle Tartarughe. The second option is Via Veneto, symbol of the Roman Dolce Vita: this area is full of exclusive hotels, restaurants and shops (including Gucci, Armani, Prada). If you want to privilege the comfort of travel, for an accessible price, all you have to do is to choose a hotel near Termini Station. Finally, it will be possible to evaluate a structure near the Colosseum and the Roman Forum, where it will be possible to admire most of the ruins and monuments of the city. Ultimately, if you want to privilege tranquillity, you should choose the streets around Vatican City.

What to visit?
You know, days are never enough to visit Rome. However, some sites of historical and cultural interest, declared by many as an indisputable heritage of humanity, are truly unmissable. One of them is the Colosseum, less known by its original name of Flavian Amphitheatre: it was the setting of fights between gladiators and beasts, and today it is the true worldwide recognized symbol of the capital of Italy. The Pantheon, as a building dedicated to all the gods (pan = all, theon = divinity), is famous for being the legendary place where Romulus was seized by an eagle to be taken to heaven. Even if it was originally built as a heathen temple, in 1870 it became a cemetery for Italian sovereigns such as Vittorio Emanuele II, Margherita di Savoia and Umberto I; also Raffaello Sanzio was buried there. During a Roman holiday, a visit to the Altare della Patria should not miss: it was built to celebrate King Vittorio Emanuele II, important for the unification of Italy. Some hours should surely be spent at the Vatican Museums known for hosting works by Caravaggio, Leonardo da Vinci, and Raffaello. Once there, you cannot miss the Sistine Chapel, an extraordinary monumental work by Michelangelo. A symbol of Christianity certainly is St. Peter's Basilica, designed by Michelangelo, and today an extraordinary example of Italian architecture. Inside of it, it will be possible to admire masterpieces of amazing beauty, including the "Pietà" by Michelangelo and the "Baldacchino" by Bernini. Walking through the squares, we suggest you not to miss Piazza Navona with the Fountain of the Four Rivers (Ganges, Danube, Rio della Plata and Nile) by Bernini, Piazza di Spagna with Spanish Steps stairway, background of fashion shows and famous movies, Campo de' Fiori, setting of the frenetic Roman outdoor market, with the central statue dedicated to Giordano Bruno. Finally, don't forget a look at Trevi Fountain as an emblematic symbol of the Dolce Vita, and famous for the legend inviting to express a wish by throwing a coin. 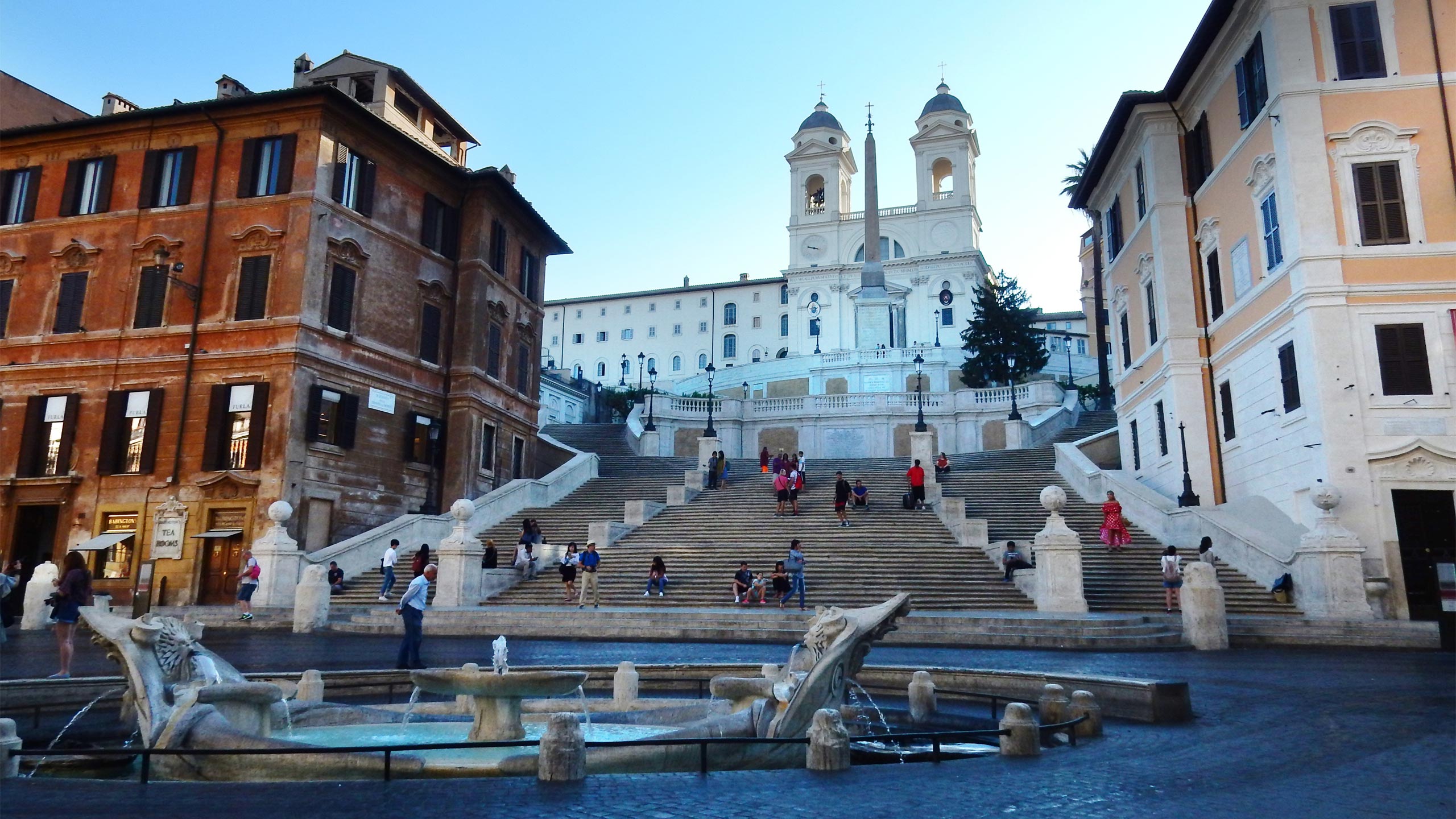 What to eat?
In a city like this, the culinary field certainly is very important, so during your visit, you will discover plenty of restaurants and bars where to discover Roman dishes. First courses are so many, such as the most famous one, the Bucatini all'amatriciana, ot other very well-known dishes such as Spaghetti alla carbonara or Cacio e pepe. Here you can also take care of yourself tasting the typical Gnocchi alla semolotta or with an abundant portion of Fettuccine paja e fieno. Second courses are very tasty too: we suggest you to taste the baked lamb and the tripe seasoned with abundant mint and Pecorino Romano. When we talk about Rome, Porchetta (typical meal from Ariccia) and the Coda alla Vaccinara (ox tail) can't miss. If you prefer lighter meals, vegetable-based dishes like some varieties of chicory. Finally, you can conclude your meal tasting the famous Maritozzo: a stuffed sweet roll filled in with whipped cream traditionally offered to women by their boyfriends during Lent.

Where to do relax yourself doing shopping?
Rome has always been fashion benchmark. There actually are numerous streets where to find many famous designer shops, but also cheaper ones. If you want to dedicate a part of your vacation to a walk around the most fashionable streets, you will only have to choose one of the several possible alternatives. Among them, the streets of the Trident: Via Condotti, Via Borgognona and Via Frattina, a well-known trio because it allows you to admire great brands like Tiffany, Versace, Bulgari, Armani, Hermes, but also numerous jewelleries. If goldsmith art fascinates you, you cannot avoid going to Via del Pellegrino, where you will find small shops selling handmade items, lamps and frames. Finally, have a walk along Via del Campo Marzio known for its elegant, expensive and antique shops, and Via del Boschetto, dedicated above all to vintage garments. Last but not least, the Galleria Alberto Sordi, once known as Galleria Colonna, is located in Via del Corso. It is a building inaugurated in 1922, which over the years has been the seat of the Council Presidency so a meeting place for politicians and journalists; it was subsequently subjected to a meticulous restyling ended by the reopening in 2003: in this occasion, it took its current name, by the great Roman actor, who died in the same year. In addition to its structural beauty able to enchant even the most disenchanted visitors, today Galleria Alberto Sordi reveals itself as a shopping centre in the heart of the city, and it offers a wide selection of elegant clothing and accessory shops. There is also a bookshop often hosting important cultural events and many bars, restaurants and bistros become a meeting and sharing place.