San Paolo Fuori le Mura is one of the four Basilicas in Rome: it is the second biggest basilica, after St. Peter’s

San Paolo fuori le mura is the second biggest Vatican Basilica, after St Peter’s. From 1980, it is part of UNESCO heritage, and it is a spectacular example of Paleo-Christian and Byzantine architecture, even if a big part of it was destroyed by a fire, in 1823.
It is one of the most visited religious places in Rome, where you can see the Sepulcher of the apostle Paolo di Tarso.

The Constantine Basilica
The Basilica San Paolo Fuori le Mura is situated 3 kilometres from the place where the apostle was decapitated. The apostle - famous for its conversion on the Way of Damascus - never met Jesus.
At the beginning, he was an exterminator of the Gospel’ promoters, and he was killed in Rome, where nowadays the Santuario delle Tre Fontane takes place. The legend tells water came out from where his head jumped for three times, after the decapitation.
Emperor Constantine decided to build the first Basilica dedicated to the apostle, integrated in 324 AD, on the advice of Pope Silvestro.
The necessity of a basilica was due to the increasing number of pilgrims visiting the Sepulcher. His body with the one of St. Peter's was moved from San Sebastian's Catacombs to the current position, where the central altar is situated.
The ancient basilica was smaller than what you can see nowadays, and it was situated on the same position, at the second mile along Via Ostiense, but it was oriented in the opposite position. We can just see only a part of this very ancient building, as you can see in the transept, in the facade, in the central triumph arch, and in the cloister.
St Paul's Sepulcher was situated there, because the place was a necropolis, where many tombs took place, currently situated under the Basilica. The apostle's one was restored, as you can see nowadays.

The Three Emperors Basilica
St Paul's was made in the way you can see nowadays, by the three Emperors of the time: Valentiniano II, Teodosio I, and Graziano, with Pope Siricio. It was the 386 AD, and they all decided to build a new one, to be big as St Peter’s. It was be a matter of necessity, as there were many pilgrims visiting the holy place.
The works finished in 390, when the Pope consecrated it, not to be inaugurated by Emperor Onorio, 5 years later.
The designer of these wonderful religious building was architect Ciriade, and we can still admire his genius, creating a 5-naves shaped building, separated by 80 columns, collected from another monument - as it was usual at the time - the Basilica Emilia, near the Fori Imperiali.

The beauties of the Basilica San Paolo Fuori le Mura
The walls they talk about are the Aurelian ones, and the beauties of this holy building enchant visitors for the richness and the history they hide, still nowadays.
It is easy to imagine the way the Popes decorated it by the years, enhancing its religious value by internal and external architectural decorations.
One of the fun facts featuring the Basilica is the presence of portraits - mosaics - of the Popes having succeeded it since the beginning.
They are situated on the entablature over the central nave. 265 are advisable nowadays, and as the space has reduced by the centuries, the tondos are exhibited in a room near the Basilica, the Pinacoteca.
Leone I had the idea of placing those portraits in the 5th century AD. He was the one who ordered the creation of those wonderful mosaics decorating the Triumph Arch. Another attraction is the entrance door dating back to the 11th century, commissioned by Gregorio VII, decorated by 54 silver panels. 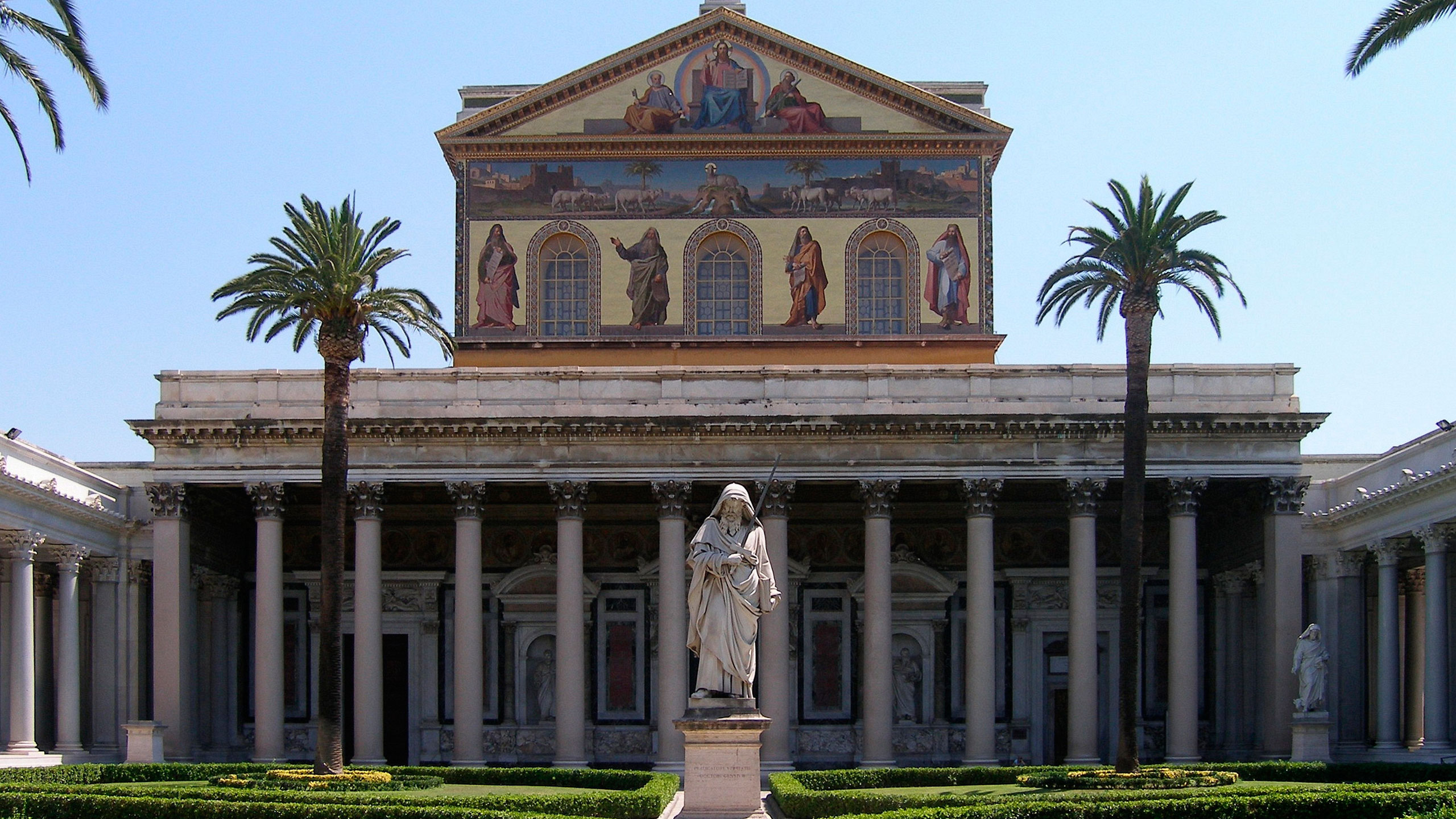 The mosaic you can see in the apsis was an idea of Pope Onorio III, in the 13th century. By the first Jubilee in 1300, more wonderful works of art have been created, as well as even more pilgrims used to visit the tomb, and also because it was a way to gain money by the indulgences to pass the Holy Door. It gets opened every 25 years, or just in case of an extraordinary Jubilee, as it happens in the other three biggest basilicas in Rome. The wonderful cloister dates back to 1300 too, decorated by many different columns. There are thousands of tombs fragments, and you can take advantage of an extraordinary silence, helping reflection and prayer, as it happens in front of the majestic Arnolfo di Cambio's ciborium.

In the basilica, you can also see one of the Easter biggest candles of Christian buildings. It is 6 metres high, completely decorated by low-reliefs about the Gospels.
As soon as you enter the Basilica San Paolo Fuori le Mura, you get astonished by the high altar, situated over the level where the pilgrims seats during the masses.
There many chapels in the Basilica, and one of them is dedicated to the Blessed Sacrament. Inside of the latter, you can admire a wood crucifix, one of the few remains after the fire in 1823. You can see it was damaged by the flames, as the absence of hands and feet shows. It's send it spoke to St Brigida of Sweden, and it is one of the most important simulacrums for Roman people, because of the numerous miracles it offered them.
Another statue showing the signs of the fire is St Paul's, a sort of remain, together with the mosaic next to it, from the 13th century. Near the Basilica, you can visit also the Benedictine Abbey, the Archaeological area of the Roman Necropolis, the Cappella delle Reliquie where you can see the chain of St Peter, and the Pinacoteca, posting paintings of the period between the 12th and 14th century.

The fire in 1823
During the night between the 15th and the 16th July 1823, the Basilica was affected by a fire closing the almost complete destruction of it. The majority of the works of art disappeared, together with its decorations.
Roman people devotion and Pope Leone XII will were able to give the building back to its ancient splendor. They opened a great site to rebuild it, as a similar as possible it was in the past. The inauguration took place during the proclamation of the Immaculate Conception dogma, on 10th December 1854, in front of Cardinals coming from all over the world and Pope Pio IX.