Roma in the pot: the recipes of the delicious desserts typical of Lazio

Rome is not only a city with an enormous timeless charm that has always attracted tourists from all over the world. When you talk about Rome, and more generally about the Lazio region, you can understand how rich in an important food and wine tradition it is. The following lines will tell you about the recipes of the delicious desserts typical of the area, ready to be tasted and discovered.

The history of traditional Lazio desserts
Lazio, like Rome, is closely linked to the food of the territory made of poor, simple and genuine ingredients. For this reason, all the recipes, without excluding desserts, come from a rural tradition easily available farm-to-table ingredients. This does not mean the Lazio cuisine has no taste and flavour! On the contrary, it is highly genuine and even today, after many years, you can still find the simple tastes of the past. The dessert recipes were often handed down by mothers to daughters, in order to keep the tradition alive over time. In addition to it, you should also know the Lazio cuisine, and not even the Capital's, is the result of the meeting of cultures and gastronomic traditions of other regions. You would better understand what we are saying if you consider it in a wider sense, not concerning only desserts. There are several dishes actually typical of other regions (Abruzzo and Campania for first). Finally, a typical dessert of the summer period, also known by tourists is the “grattachecca”. This actually differs from the classic “granite” since a single block of ice is served in the glass, adding the syrup of the favourite flavour. Its particular name is due to the fact the ice is grated by hand by a spoon. 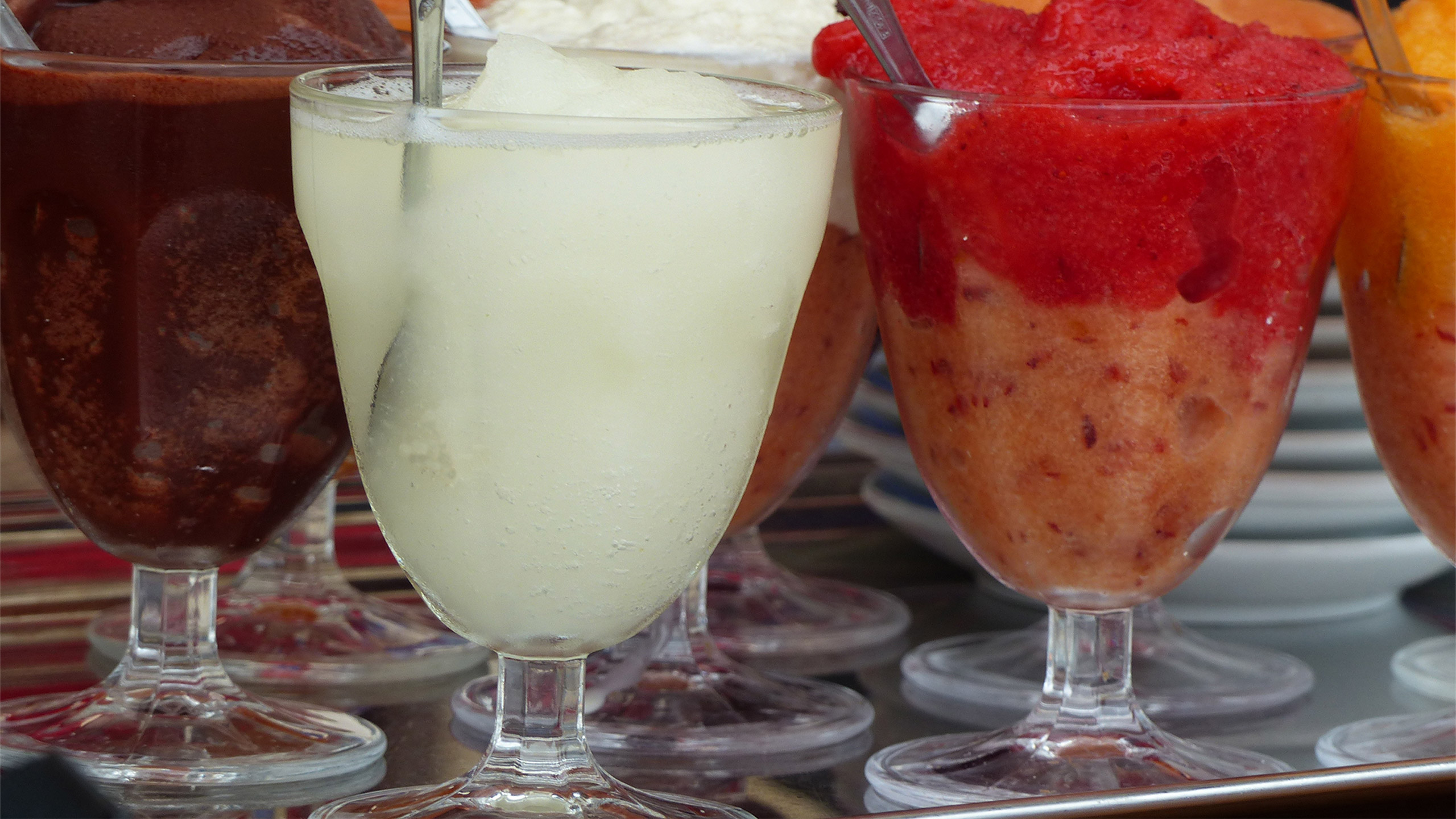 The desserts symbol of Rome
As for the Eternal City, how could we not mention the "maritozzo" with cream? This dessert is the best known in Rome and the most famous among tourists. It simply consists of a small sweet roll made of very simple ingredients: flour, eggs, butter, a pinch of salt and honey. Once cooked, it is cut in half and filled with plenty of fresh whipped cream. The “maritozzo” with cream has a very ancient origin: it is thought it was served with a lot of honey, in the ancient times. Another dessert, loved by the Roman inhabitants eating it during Sunday lunches or during the festivities is the "pastarella": a small cake, filled in with any type of cream: chocolate, simple cream, coffee, “zabaione”, etc.
Nowadays, people usually buy them in pastries, but some years ago - and sometimes even in some current families -, the tradition was to meet each other to make them all together. Finally, during the whole period of the Carnival in Rome, you will usually find "chiacchiere" and "frappe", both fried in hot oil or baked, available in any bakery of the city.

The typical desserts of Lazio
Starting from the province of Latina and in the whole area of the Agro Pontino, you can taste numerous desserts, whose preparations have often been influenced by the neighbouring Campania. An example is the "pasta di mandorle", petit fours made with minced almonds, sugar, egg white and lemon. In addition to them, you can also find the "serpette" - in Italian, it means "little snakes" - the "spaccaregli", the "caciata" and the "ciammelle". The "serpette" are biscuits with an S or U shape; the "spaccaregli" are round-shaped pastries with a filling of jam and an X-shaped incision on the surface. Then, the "caciata" is a typical dessert of the Agro Pontino whose recipe is very simple: ricotta cheese, lard, milk, lemon zest and yeast. Everything is baked in the oven in a cake pan. Finally, the "ciammelle" are sweet donuts made of simple ingredients everyone can find at home: flour, water, eggs and with some variations that include wine instead of water. The influence of the Campania region can be found again in the typical "sfogliatella" with ricotta cheese, the "mostaccioli" made of flour and honey and the "tortoli", typical christmas dessert.
The province of Viterbo is characterized by a stronger presence of cakes made with sweet wine and dried fruit. You will be able to taste the "pangiallo" during the winter period, made of ingredients of the poor tradition: flour, chocolate, dried fruit and honey, but you can find it made in several different ways, including the preparation with saffron water or almonds. How could we forget the wine donut still come on in the Roman "trattorie"! Moreover, there are the sour cherry and ricotta cheese little pies, made of shortcrust pastry, and the "pane del vescovo". In occasion of Father's Day (Saint Joseph's day) you can taste the rice pancakes.
In the area of Rieti, the recipes of typical Lazio desserts are strongly influenced by the Abruzzo region. The ricotta tart is very thermals and it is made of a shortcrust pastry with orange zest and chocolate chips added to the ricotta filling. Also the "ciambelle rize" and the "tozzetti" are very popular. The dough contains simple ingredients like water, anise seeds, sugar, oil and wine. In Frosinone, on the other hand, the dessert called "casata di Pontecorvo" is very common during the Easter period. To the mixture of eggs and a pinch of salt the sheep's cheese is added true protagonist of the dessert, with chocolate, cinnamon and cedar.

There still are many real typical sweets of Lazio different from the proposals of tourist restaurants that often offer the classic desserts like "tiramisù", "panna cotta" and "profiteroles". Many of them are also known in the neighbouring regions with some variations in the ingredients. However, they're most important feature is they are made of ingredients from the rural tradition, simple, genuine and exclusively made by hand.