Rome at the table. A delicious second course: Saltimbocca alla romana and their controversial origins...

Rome is certainly known by everyubody (not only tourists!) for the beauty of its historical, artistic and cultural elements. However, in addition to these making the city and the surrounding area unique and fascinating, you should also consider the richness of Roman gastronomy, actually made up of poor and essential ingredients.

Saltimbocca alla Romana
This second dish made of meat has become known throughout Italy and many chefs make it. Most of the Italian population thinks it is a dish born in the Capital. However, the origins of the Saltimbocca alla Romana are from Brescia and also very ancient. On the contrary, the famous and great critic Pellegrino Artusi states - in his manual called "Scienza in cucina e l'arte di mangiar bene" -, already at the end of the 1800s, a historical Roman trattoria called Le Venete made the Saltimbocca alla Romana for its customers. Nowadays, this scale is defined as a traditional Roman dish because Rome itself made it and spread it throughout the various taverns. The name Saltimbocca is to emphasize this dish should be eated in just one bite and for this reason, it is perfect as street food. The etymology of the name recalls a food that jumps into the mouth by itself, thus making us perceive how good and tasty they are, and above all, tempting both the eyes and the palate.
Finally, we suggest you to drink a local wine that brings out the best of raw materials.

Saltimbocca alla Romana: the recipe
Saltimbocca alla Romana are lightly seasoned chops with salt and lean veal covered by half a leaf of sage. Why not a whole leaf? Because it would be too large and would cover the taste of Saltimbocca. In addition, a thin slice of raw ham is placed on the sage. To keep all together, the meat and the filling are skewered by a wooden toothpick. Everything must be cooked in a pan containing butter, but pay attention not to roast it as the ham may become hard and difficult to eat.
Use tender veal as it will melt in the mouth.
As you can understand, this dish is healthy and tasty, but above all it can be cooked and instantly eaten. It should be served hot, and it gets perfect if enjoyed with friends, taking the Saltimbocca by the hands. This dish, with its uncertain and almost probably Brescian origins, has become a typical course of the Roman tradition, for this reason it is often served in restaurants as well as in trattorias in order to enhance the simplicity and flavour of the ingredients.
The Saltimbocca alla Romana can be served with any side dish, possibly with seasonal vegetables. One of the favourite combinations of Roman clubs is the Saltimbocca alla Romana with sautéed chicory: a true gastronomic tour in Roman and peasant traditions. 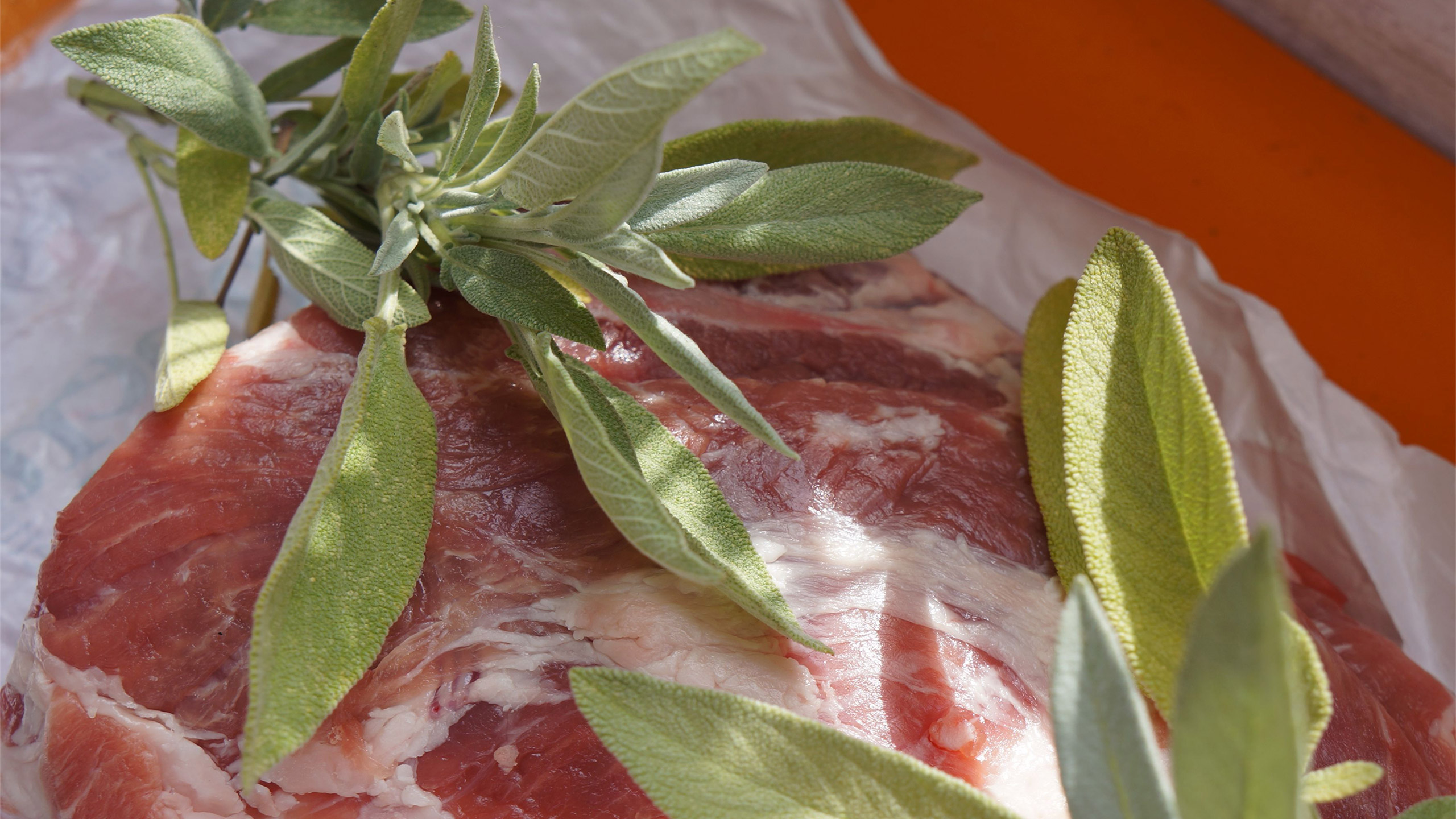 Regional varieties
Despite the recipe is written in a historical text, different variations have been developed. IT actually is such a versatile dish, it has been welcomed by many restaurateurs from all over Italy and therefore, it may be difficult to find and taste the original recipe. The differences don't concern only the ingredients, but also shape and size. It is not uncommon to find small morsels, rolls as well as whole steaks in extra large format. Again, an important aspect is the filling: often the ham is replaced by speck or cooked ham. In addition to that, in the historical cooking manual, it is written the meat must be veal. Very often, especially in the regions further away from Lazio, you can find them cooked with chicken, turkey or pork. Furthermore, the meat should never be floured (there are many recipes that mention this incorrect passage). Another detail is the meat should not be blended with white wine but should only be cooked in a pan with plenty of butter.
You can understand how just adding one of these wrong ingredients, the recipe and the taste completely change. The taste of true Saltimbocca alla Romana is a full-bodied taste, in short, incomparable and not covered by other additional tastes.
Therefore, if you are around Rome and wish to taste the right version, beware of all those places that call them "involtini" or even "bistecche".

In conclusion, although its origin is somewhat controversial and always contended between Brescia and Rome, its goodness and taste is undoubted. It is a so versatile dish, it can be eaten by the hands, even arranged in a street bag while walking to discover the artistic beauties of Rome. Ideal to be shared with friends, they are also perfect on their own, because one leads to another and you don't risk being left without them.
In addition to this, it can be easily cooked at home using right quality raw materials. If you prefer to discover Rome, you should know that this dish is served in any restaurant, because it is considered one of the cornerstones by the Romans.
However, a suggestion is to avoid too touristy places, it would be better to prefer those more distant from the centre, in the alleys and the narrow streets of the city. The best trattorias respecting tradition and respectful of the original recipe are those hidden far from the crowd and the main attractions. The taste of Saltimbocca alla Romana is hard to be forgotten because it satisfies all palates and needs. The ancient origins of this second meat dish allow both adults and children to taste it, aware of the goodness and the authenticity of the flavours.