The triumph arches are symbols of the Italian capital, considered the Urbs of the ancient times.
There are only 3 triumph arches we can still see nowadays, together with another one we can't actually say is a “triumph” one.
The three arches about which historians have no doubt are: the arch of Constantine, the arch of Septimius Severus, and Titus’ arch. The fourth one is Janus’, characterised by a long discussion to discover whether it is a triumph arch or not. In addition to them, Rome had many others arches, but we can say just some ruins of them nowadays.
According to some document, in the past the Italian capital had 36 Arches: of Theodosius, Honorius, Arcadius, Valentinian, Gratian, Constantine, the Arcus Novus, Portugal, Gallienus, Jordan, Marcus Aurelius, Lucius Verus, Trajan, Domitian, Titus, Nero, Claudius, Germanic, Dolabella, Silanus, Lentulus, Crispinus, Drusus, Augustus, Octavius, and Pompeus.
As you can easily understand by their names, each arch was built to honour the emperors after military winning campaign against the enemies. In the Roman times, the triumph arches had a commemorative function, to celebrate the victories of the Roman army after very important battles. After almost two thousand years, however, the triumph arches have a very important role in the Roman touristic economy, as they represent one of the main attractions the foreign visitors want to visit.

The arch of Septimius Severus
The arch of Septimius Severus dates back to the beginning of 200 A.D., built to celebrate the first 10 years of Septimius Severus’ empire, the founder of the Severus dynasty, made of the following Caracalla, Heliogabalus, and Alexander Severus - the latter closed the 40 years old dynasty.
According to the remains you can see nowadays, we can understand the triumph arch was built to celebrate the victory against the Parthians - the current Iran and Iraq populations -, the strongest enemies Roman people had before and after the empire institution.
The arch is covered by marble and there are the most important moments of the battle depicted on the frontal part, the one facing the Foro Romano: you can see the emperor speech to his soldiers and the conquest of Edessa, fundamental code for the final Victory. On the side facing the Campidoglio, there is the enemies escape, and the attack to Ctesiphon, one of the most important cities of Mesopotamia.

Arch of Titus
The arch of Titus probably is one of the most famous symbols of the city of Rome. As the arch of Septimius Severus, it is also preserved into the Foro Romano, under the Palatino hill. Its built - by Domitian - dates back to 81 A.D., after Emperor Titus' death, to celebrate the victory the Roman army had in Judea during the previous years, with the final symbolic destruction of Jerusalem, the Holy City.
Inside the arch, there are two panels celebrating Titus' triumph in Rome. He is represented on the famous triumph coach, together with the remains of Jerusalem temple, symbol of the destruction of the city feel nowadays occupying a very important position for all the monotheist religions. The inscription of the dedication made by the Senate to Titus is placed instead on the side facing the Colosseum.

The arch of Constantine
The third arch in Rome is the arch of Constantine, located along Via San Gregorio, the ancient road of triumph where emperors were greeted by the people before entering the Campidoglio. Today, the arch of Constantine is considered a museum of Roman sculpture at the open air, because of the wonderful statues completing the work. The built dates back to 315, during the first 10 years of Constantine I’s Empire - in charge from 306 until his death, in 337.
Under the arch of Constantine, the famous battle of Ponte Milvio took place, in 312 against mass and steel troops: this battle represented an important change for the Roman Empire After Constantine's victory. The battle of Milvio Bridge represented on the arch is famous also because it is associated to the common dream he had the night before the final battle: the emperor saw Jesus Christ and the cross, symbolising the victory he would have had the day after. 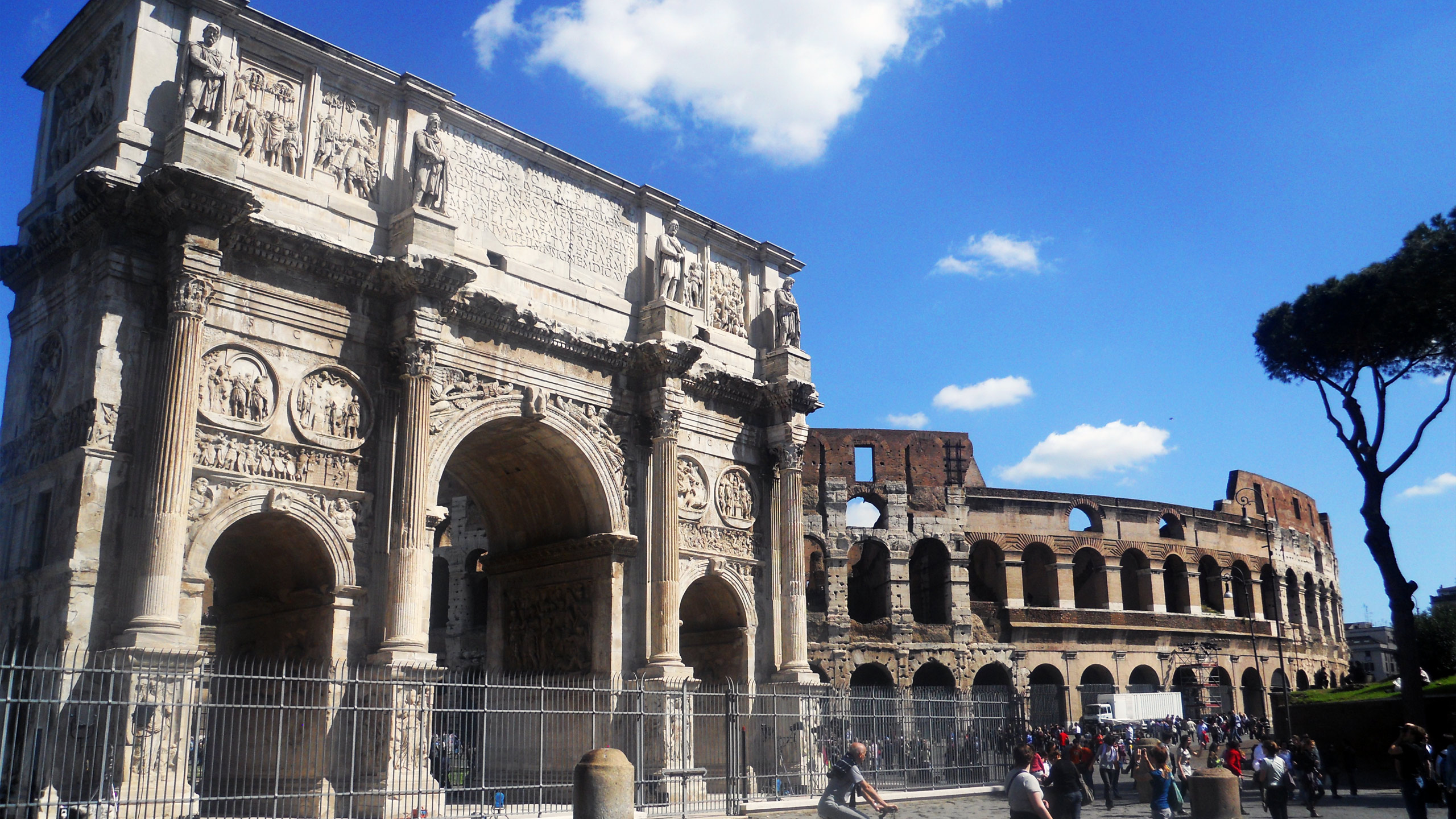 Tour of the triumph arches in Rome
The visit of the three triumph arches in Rome is one of the most requested tour. It usually starts at the Foro Romano, where you can see Septimius Severus and Tito's arches. From there, you will move to the holy street towards the Colosseum. The distance between the two arches is only 200 metres long.
Considering the tourists queue, and the time spent catching pictures by your camera or last generation smartphones, the two should last about 90 minutes, and we suggest you to do it before or after the Colosseum visit. If you have already visited Rome in the past, and you haven't discovered the triumph arches, you can dedicate more time to them.