Launch a coin and make a wish! Where? In the famous Fontana di Trevi in Rome

Fontana di Trevi - the stage of the famous kiss between Marcello Mastroianni and Anita Ekberg in the movie "La dolce vita" - is one of the most visited monuments of the Italian capital, and it represents the last part of the Acqua Virgo, the aqueduct built in 19 BC to supply the public thermal baths. The system got changed several times, during the Middle Ages, so causing problems to the flow of water. Nicolò V ordered to fix it, in 1453.
In 1625, Pope Urban VIII commissioned Bernini to demolish the old structure and to build a great fountain; the work didn't get completed at the time, because of the Pope's death. Pope Clement XII ordered an announcement to choose somebody able to complete it: Nicola Salvi was the winner, the one who made it, inspired by Bernini's project.
The works lasted for 30 years, completed in 1762 by Giuseppe Pannini; the inauguration took place on May 22nd, in the same year.
Tradition tells you to turn your back to the fountain and lunch the coin by the right hand, passing on the left shoulder, keeping your eyes closed: when the coin will reach the fountain, you will be sure you will be back in Rome again.
Alternatively, you can launch three coins, and you will be able to make three different wishes. The first wish is to be back in Rome again, the second one is the desire to meet your soul mate, and the third is to get married with them.
It is estimated about €3,500 are usually launched into the fountain in one week, and almost 1 million of euros per year.
This money - daily collected at 8 a.m. - go to the Caritas Association, donating it to the poor people.

THE MAIN FEATURES of FONTANA DI TREVI
Fontana di Trevi - 26,30 metres high and 49,15 metres large - spends on Palazzo Poli; it emits 80000 cubic metres of water per day.
It is characterized by statues, made of Carrara marble, and by a facade and a cliff, both mad of travertine.
In the middle of the attic, you can see an inscription telling you Pope Clemente XII was the one who desired its built, as you can see by the coat of arms on the top. The building is decorated by 4 big sculptures, representing the "Abundance of fruits", by Agostino Corsini, the "Fertility of the fields" by Bernardo Ludovisi, the "Fall’s gifts" by Francesco Queirolo, and the "Amenity of lawn" by Bartolomeo Pincellotti.
The Ocean' statue, by Pietro Bracci, is situated in the middle of a big triumph arch, and it is 5.8 metres high.
The divinity has a well-done body, a big and long beard as a symbol of wisdom, and his look is elegant but haughty.
He's keeping the leaders scepter by the right hand, and a drape discovering his genitals, by his left hand.
He is driving a triumphal coach, with the shape of a shell, following two seahorses with wings, and tritons, representing the storm and the quiet sea. 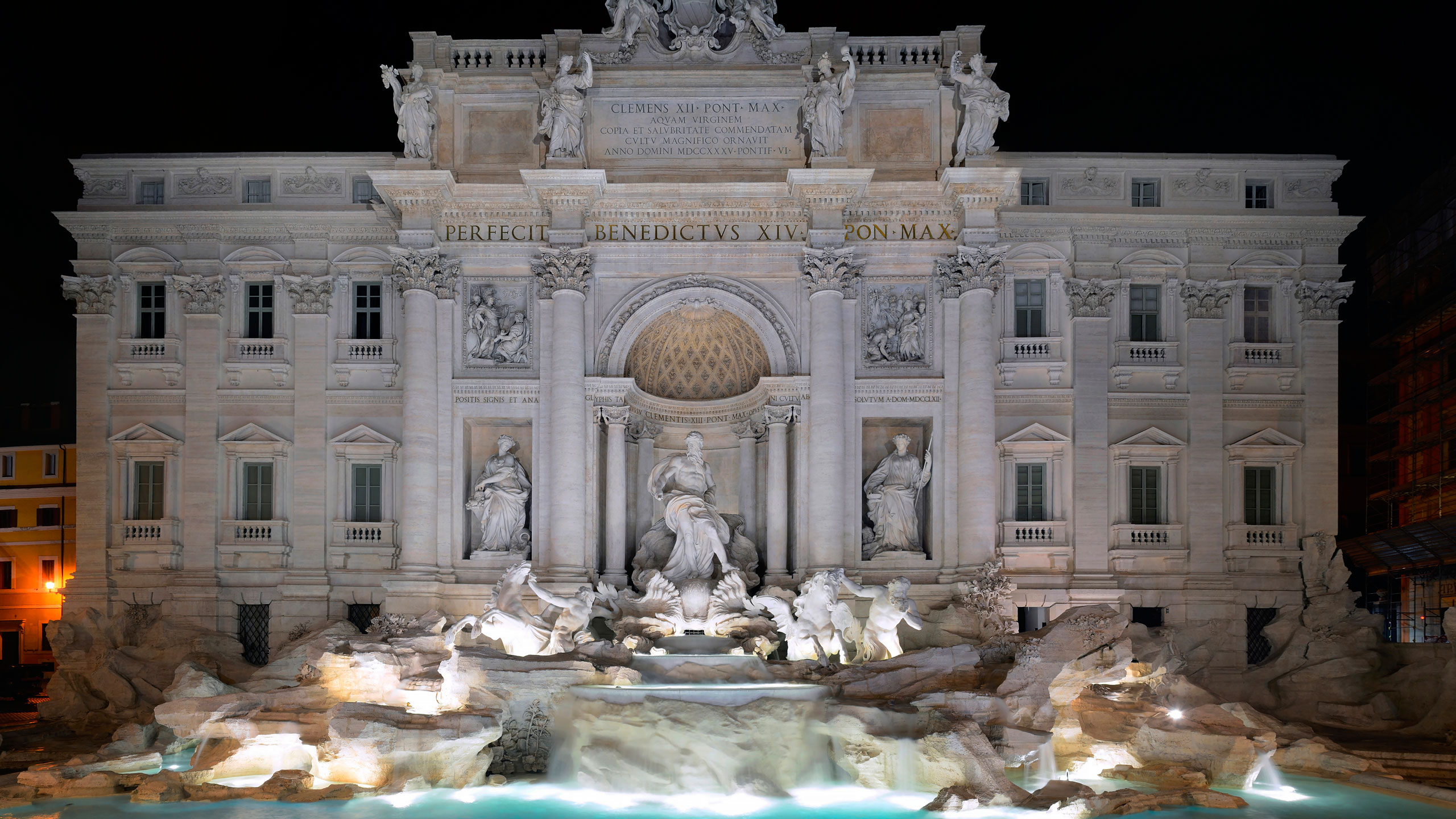 One of the tritons is very young and strong, and the other one is older, playing a musical instrument to announce their passage.
On the left and on the right of the recess you can see the statues by Filippo Della Valle: the Abundance" and the "Health". The first one keeps a horn rich in fruits by the hands, and there is a vase on the floor next to its feet, pouring water as water source; the second one wears a Bay crown, keeping a bowl a snake is drinking by.
Above them, there are too low relief panels representing Agrippa accepting the built of the aqueduct and the Virgin showing the source to the soldiers.
The fountain is also characterised by marble decorations representing several types of plants, such as a caper bush, a wild fig, a prickly pear, a verbascum, an artichoke, an oak trunk, and a vineyard with four grapes.

FUN FACTS AND LEGENDS ABOUT FONTANA DI TREVI
The first fun fact connected to the name of this work of art is connected to the Middle Ages, when in the place where the fountain is situated, there were three streets making a cross, called a "trivium". We should say the precise point where it is situated is in the close Piazza dei Crociferi, where the exhibition of the Acqua Vergine took place.
The construction of the fountain was affected by several tragic accidents: many people got injured and died during the works.
A stonemason was crushed by a block of stone, in 1734, a bricklayer fell from an attic in 1736, and an apprentice died after serious damages after a fall.
This masterpiece is made of travertine, a type of stone made of calcium carbonate, from the thermal water sediments.
The material - whose name takes origins by the Latin adjective "Tiburtinus" - was used to build important works, such as the Colosseum in Rome, the Basilica of the Sacred Heart in Paris, and the Getty Centre in Los Angeles, California.
Another interesting fun fact is the one about the "Asso di Coppe". On the rocks on the left of the fountain, you can see a big bass made of travertine with the shape of a card suit. The sculpture was made by the will of Nicola Salvi, tired of the unlimited critics hairdresser used to do from his shop situated in Via della Stamperia, from where he could see the sculpture, in order to cover it. The two most famous legends tell about couples of lovers.
The first one tells the girls have to let their boyfriends drink the water of the fountain, and then to break the glass they used, before they leave them, to go far away for work or military service. The boyfriends will not forget them and their love will be eternal.
The second legend says that if lovers drink the water of the "Fontanina degli Innamorati" together, they will be happy and respectful for all their life.