One of the most famous Roman people features is their love for thermal baths. They used to build thermal baths everywhere they could. At the beginning, the aim was to take advantage of the thermal water sources already existing, then, as well as the population grew up, they had to find a way to make the thermal baths available for the citizens, too. It was not just rich people have it, thermal baths where available for anybody, and they used to get built in any district needed it.
They were an important symbol of power, and every emperor actually tried to build the biggest thermal baths as possible. Their social role is witnessed by their accessibility, the entrance was very cheap and even free sometimes. Obviously, the poorest people couldn't take part to the shows in the majestic theatre in the thermal baths, but they could even spend a day in the hot tubs of the establishment.
Terme di Caracalla and Terme di Diocleziano are two of the most important and well preserved establishments.
How were they? How big were they? And who did use them? We will try to answer to these questions, remembering you that you can visit them for free every first Sunday of the month, thanks to the "Domenica al Museo" programme.

How were the thermal baths of the ancient Roman people?
Roman people - as anybody knows - where able to build monuments still resisting after millenniums of history, as well as the thermal baths. Their skill of finding and analyse water was famous even in the far away areas, at the time. And that was one of the main reasons of the success. They were equipped with a complicated underground system that warmed water and regulated the flow.

The ritual of the thermal baths in the ancient Rome
Attending thermal baths was not a way to spend a relaxing day, as we do nowadays, but a social ritual. They used to start doing some exercises in the gym: yes, Roman people loved gyms! They could even warm themselves up in the big court outside.
After having expelled some toxins, they used to enter the tubs, from the warm to the hot water ones. Along the course, there was the main room - the tepidarium - where they used to spread some oil on the skin before and after the bath.
After one hour in this room, they used to move to the other two smaller rooms, containing hotter water tubs.
The last step was a bath in a swimming pool - the frigidarium - to tone up the skin. Their day at the thermal baths was a long day, and it was not dedicated to the body health only, even if it was one of the main motivations. Thermal baths where a place where people used to meet, chat, and gossip, too. 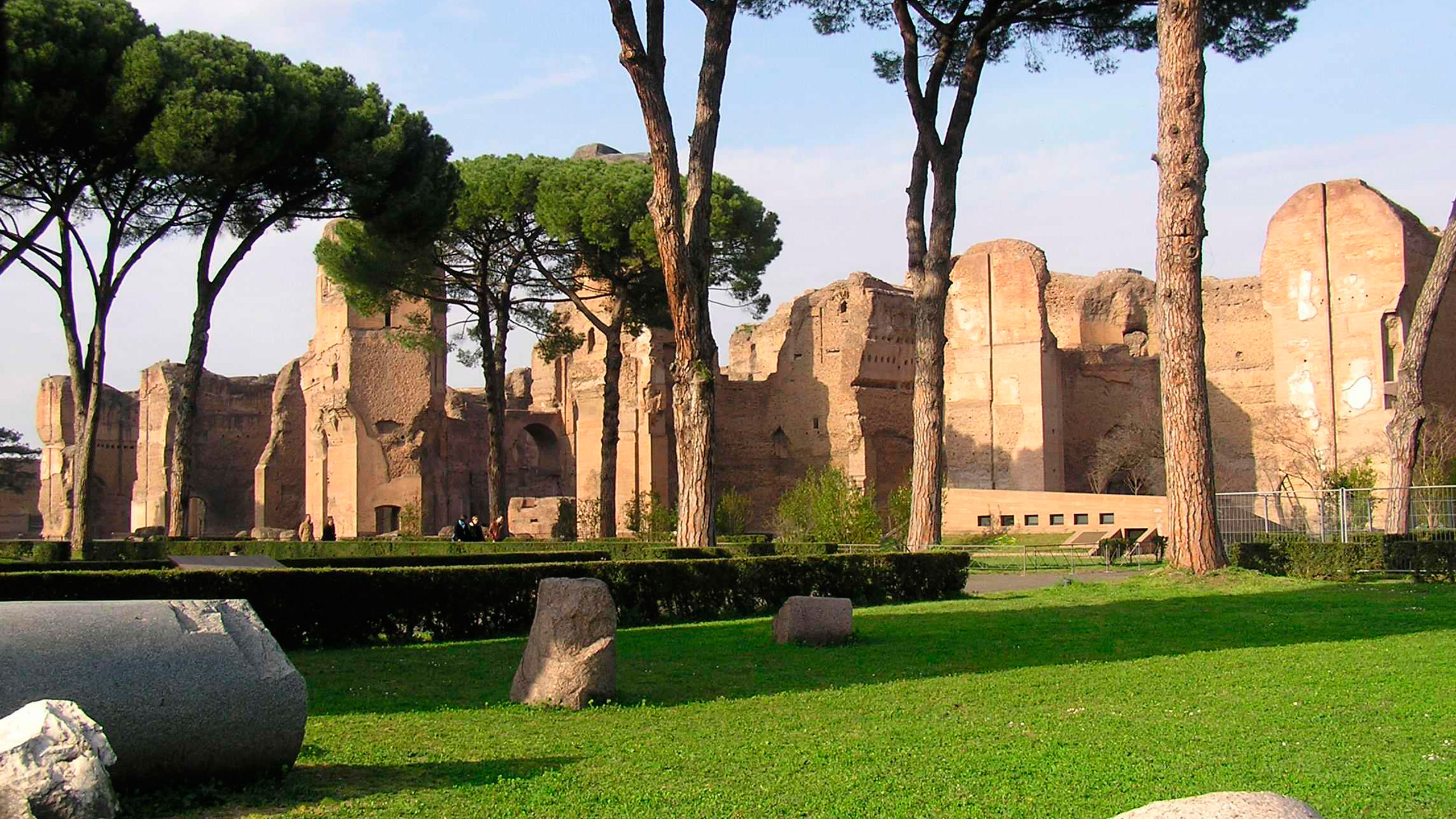 The thermal baths were "social"
Anybody could attend the thermal baths, even the poorest citizens. Many establishments were actually free. They had to be completely naked, men and women had different time access. There was also a gym, the sauna, the massages centre and the most luxurious thermal baths - as Diocleziano's ones for example – were equipped with a theatre and a library, too.
Even if the benefits of thermal waters are evident still nowadays, going there very often could create some health problems. The temperature changes, hot and cold water could cause the deviation of the nasal septum.
As you can imagine, having a bath together with thousands of naked and sprinkled with oil people isn't exactly a very healthy habit.

Terme di Diocleziano: the biggest thermal baths in Rome
Terme di Diocleziano took the name by Emperor Massimiliano, the one who ordered they're built, and they were the biggest ones in the ancient Rome. They occupied 13 hectares surface, like about 12 soccer courts, and they could host even 3000 people. The thermal baths had to host the people living in the Quirinale, Viminale and Esquilino districts. Rome population was made of about 1 million of inhabitants, and it was one of the most important and biggest cities in the world. In order to find some space for this great project, big districts were destroyed. Their built was completed in 305.
They where south-west oriented, in order to get sun rays as more as possible. The aqueduct Acqua Marcia was the one used to collect water, until 537, when it got abandoned after the destruction by the Goths. They had the same the city of many important monuments of the Ancient Rome, and they became the source of building matters for the populations of the following times.

The Terme di Caracalla: the best preserved Roman thermal baths
Terme di Caracalla where built by the emperor with the same name, on Piccolo Aventino hill, between 212 and 216 AD.
They were considered the biggest thermal establishments of the ancient Rome, and they are the most famous as they are the best preserved ones even nowadays, far from the modern buildings.
In 212, they created a branch of the Acqua Marcia aqueduct to increase the collection of water: the Antoniniana. The Acqua Marcia aqueduct was lately used by the Terme di Diocleziano, too, as you already know.
Even those got abandoned, but with a different destiny from other Roman monuments, they didn't become a place where to collect building matters. At the beginning, they were exploited as a residential area, to be lately moved into a farm area of vine yards and grazing.
Recently, in 1960, during the Olympic Games in Rome, they hosted gymnastics competitions: a great location for them.
In the Vatican museums, there is a mosaic representing the athletes of Terme di Caracalla, a big pavement discovered in the 19th century, representing athletes hanging the instruments used for their specific sport, such as the discus throw. Some of them are keeping awards with their name, in the hands.
The mosaic probably dates back to the first decades of the second century after Christ. In addition to this mosaic, numerous works have been found in the baths of Caracalla, including the majestic bronze sculpture "Farnese Bull".