Holidays in Rome: some fun facts about one of the squares symbol of the Eternal City, Piazza Navona

From the ancient Romans up today: Piazza Navona
Piazza Navona is one of the best known symbols of the capital of Italy, which boasts a thousand-year history full of anecdotes and fun facts. This place was a horseshoe-shaped arena, where the stadium of Domitian stood, built to host foot races.
Traces of the ancient name, Circus Agonalis, which indicated the competitions hosted here, are still visible today: by the years, the name changed into "agone" to finally be the modern term Navona. As it usually happens according with historical elements, there always are at least two versions: another theory, would actually tell about Navona to indicate the large ships used to simulate naval battles in the square.
The ancient Romans certainly did not lack imagination in terms of entertainment.
Towards the end of the Renaissance, Piazza Navona was the reference point for fruit and vegetable traders in Rome until the second half of the nineteenth century, when the market was moved to Campo dei Fiori. However, if you visit this square during the Christmas period, you will be able to find the commercial aggregation that characterised it a few centuries ago, immersing yourself in a splendid themed market, with typical objects of the period and many gift ideas for those who have to buy their gifts.

Baroque fountains and churches: artistic rivalries made in Rome
Piazza Navona would not be so recognizable without Bernini's fountains, which remain silent witnesses of the passing time. The three aquatic monuments are dedicated to the Four Rivers, the Moro and Nettuno. Generations, fashions and historical periods alternate themselves, but the fountains will always offer rest and refreshment.
The Fountain of the Four Rivers, the largest, located in the centre, built in 1651, pays tribute to the deified personifications of four very important rivers: Nile, Danube, Ganges and Rio de la Plata.
The latter, in particular, can be seen with his arm raised to represent the submission of the American continent, blinded by the light of the central obelisk, which symbolizes the hegemony of Christianity at the time. One of the most bizarre curiosities related to the fountain concerns the church in front of it, that of Sant Agnese in Agone, designed by Bernini's historical rival, Borromini. The two could hardly see each other and made it known in almost all their works: here the head of the Nile looking at the facade is intentionally covered, testifying that Bernini could not tolerate the vision of the colleague-enemy church. Sant'Agnese in Agone stands in a place that housed a church dating back to 300 AD, the time when Sant'Agnese was made a martyr. Legend tells she had been stripped of her executioners, and that her hair had miraculously grown to help her cover her body and save her honour. The church we can admire today, located on the western side of the square, was commissioned immediately after the fountain: it is interesting to note how this splendid architectural example which in other parts of the world would be treated as a major attraction in Rome, where many similar churches are located, is almost overlooked by tourists. However, if you are in the area, you should consider a visit, since it is a real gem. 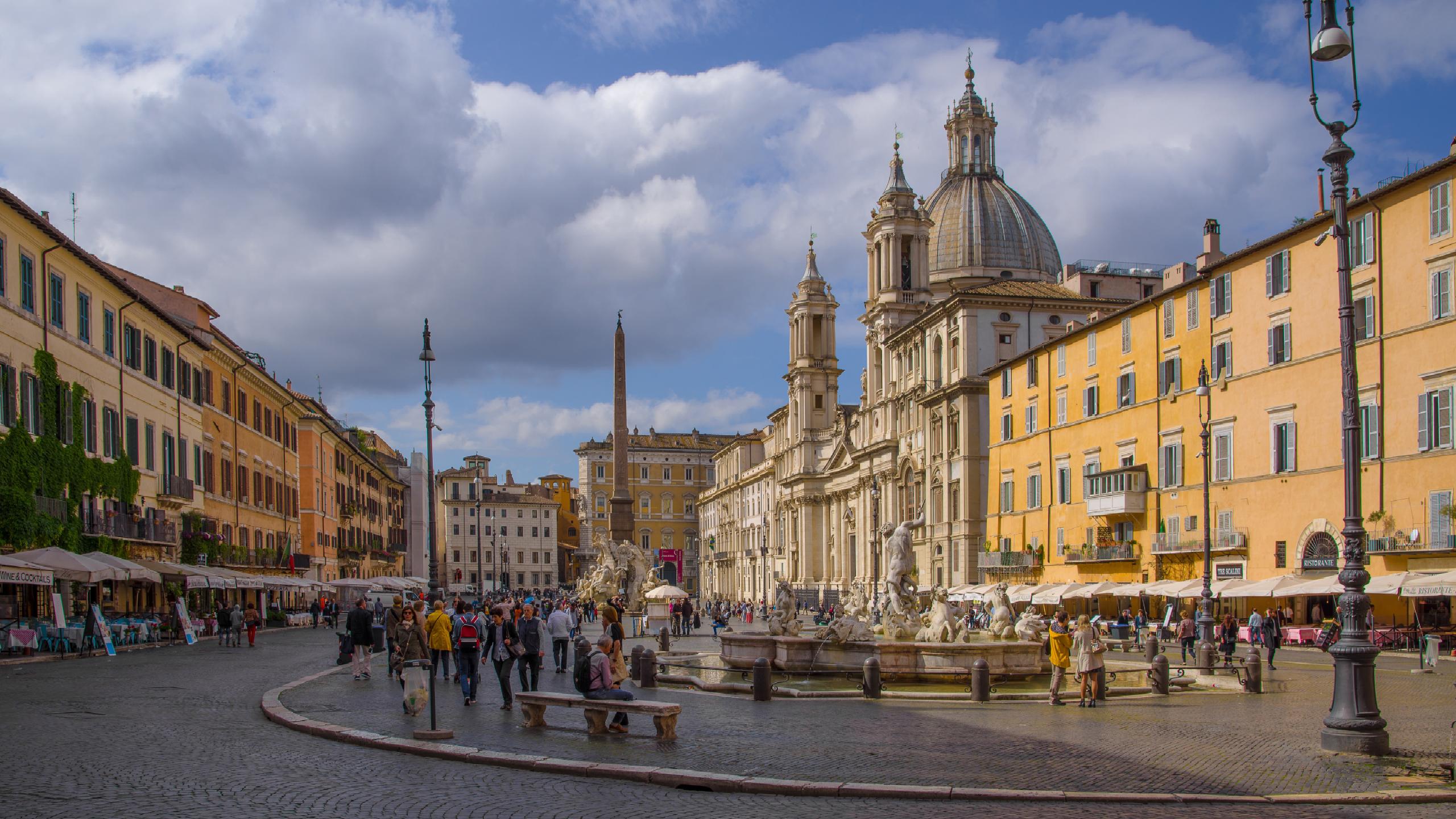 The other two fountains: marine stories centuries long
Bernini's Fontana del Moro, south of Piazza Navona, owes its name to the depiction of the struggle between an Ethiopian and a dolphin, while the Fountain of Neptune, which stands at the opposite end was commissioned to Giacomo della Porta, who set himself the goal of making the two architectural elements harmonious as much as possible. Both fountains are made of a spectacular pink marble, but the idea of the architect Della Porta was never completed and the fountain remained without decorations for a long time. In the second half of the nineteenth century, Della Bitta was then entrusted with the task of completing the statue of Neptune, depicting the divinity having the upper hand on an enormous octopus: this is how it became the Fountain of Neptune.

Where is Pasquino? The speaking statue
Walking along the south-west side, you will arrive at a very small square, where you can see the first speaking statue of the city, Pasquino.
Arrived towards the end of the 1500s, Pasquino already was in bad conditions: perhaps, this aspect gave rise to his success. On the base of the statue, small pieces of paper began to appear, which served as a denunciation of the misdeeds committed by the administrations. These were small verses exposing the complaints that people used to tell each other. It was one of the first form of opinion printing, which of course immediately became very popular. The author of the first notes was arrested, but the custom has survived up today, since Pasquino still hosts notes that ridicule what is happening in the city.

What to do when visiting Piazza Navona
If you are planning a long weekend or a trip to Rome, Piazza Navona will certainly not be missing from your itinerary. This vital hub of the city will be able to kidnap you thanks to its vitality, in addition of course to the architectural pearls that you can see and admire. Nowadays, you can always find something to do in Piazza Navona, both during the day and at night. In particular, on the north side several portraitists gather, to which art dealers and posters join. In the evening, the square becomes one of the privileged points to have a bite to eat outdoors, while during the day there are many people who have a drink or enjoy an ice cream sitting on the fountain. As mentioned, during the Christmas season stalls of decorations, gift ideas and sweets arrive. From the beginning of December to the Epiphany, you can buy souvenirs to keep with you to always carry your Roman holiday in your heart.