Holidays in Rome: The archaeological complex I Mercati di Traiano: not only a museum, but also workshops, events and exhibitions

The archaeological complex of the Markets of Trajan has features considered unique not only in the city of Rome, but all over the world. The complex allows visitors to learn about the evolution of a district through all its transformations, from the imperial to the contemporary age. It is a cultural centre where events, exhibitions and workshops take place to bring the people closer to the love of art and history.

History of the Markets of Trajan
It is a complex of buildings made of brick on several levels: it was built in the same period as the Foro Traiano, in the 2nd century A.D. Its architectural interest is due to the arrangement of the different environments within area on the Quirinal Hill. The Markets of Trajan have always been working, since the time of their built, and they underwent integration and restoration interventions up to nowadays; since 2007, they have actually become the headquarters of the Museum of Imperial Forums. But how are the markets built? The lower part includes:
- the Great Hemicycle, on three floors;
- the two courtrooms along the borders;
- the Little Hemicycle, on three floors, too. 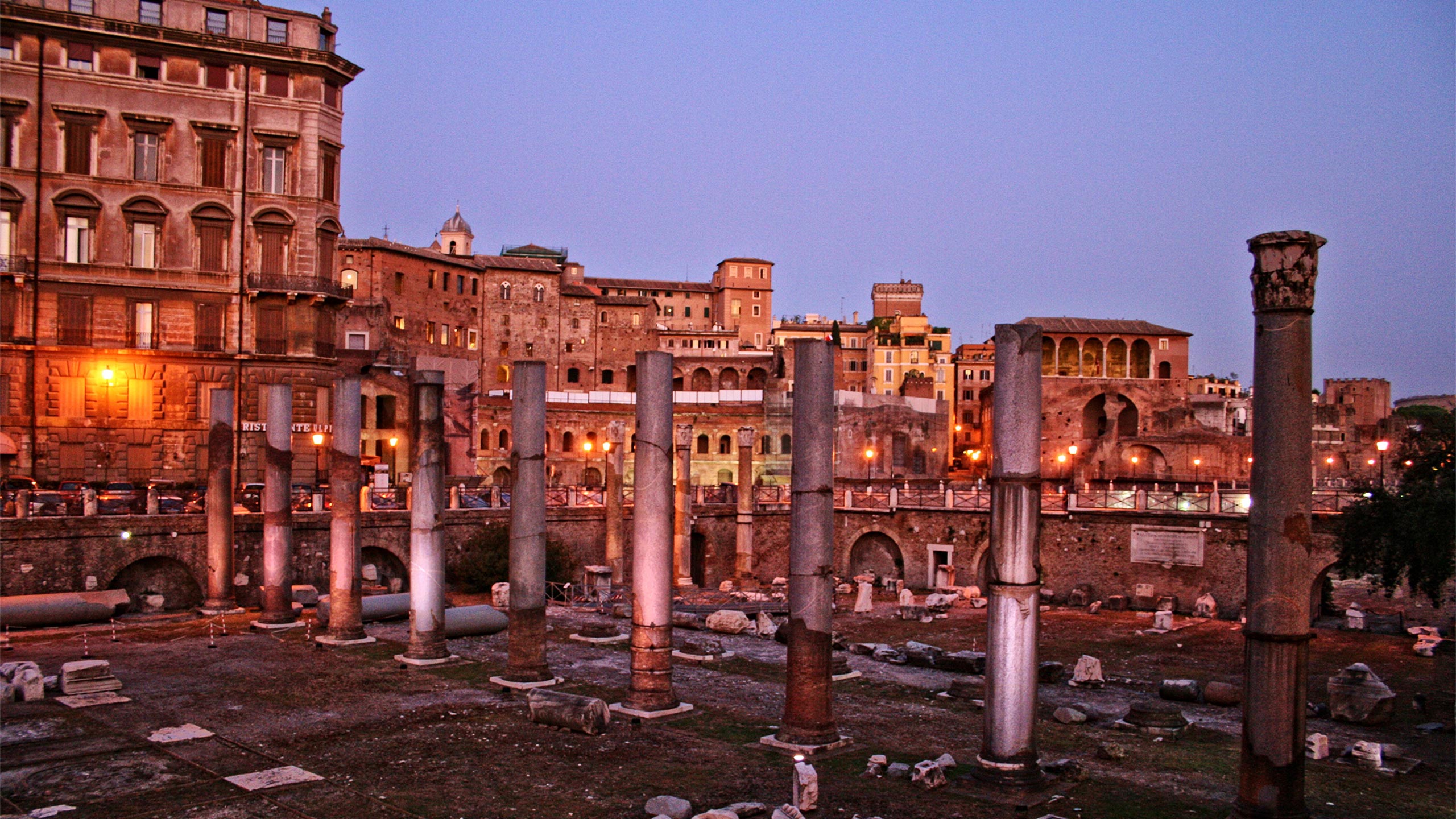 To reach Via Biberatica and the upper floors, there are stairs on the borders of the Great Hemicycle. The building technique is called "opus latericium": it is the famous concrete used in all Roman buildings, which was then covered by bricks. We mentioned the architectural interest of the work: the slopes of the Quirinal Hill were actually cut, obtaining the spaces where the building environments were built, following the section line, on several levels. It was therefore a complex work, with different internal connections among the different floors. Since part of the projects no longer exists, visiting the complex you will not have the perception of how the work was actually hidden by the perimeter wall of the Forum of Trajan; the monument was therefore only partially visible.

The evolution of Trajan's Markets has been constant over a period of two thousand years, going through different eras:
- the imperial age: the built of the Markets was attributed to Apollodoro da Damasco, the Syrian architect who designed the Forum; however, the complex is the result of synergies and planning of all the architecture of antiquity, a unique case in Roman times;
- the medieval age: after the end of the Roman Empire, interventions were made by the noble families of Rome, who took possession of many buildings, transforming the Markets into the castellum miliciae; in 1300, Pope Bonifacio VIII seized it, even if for just a short period, after having invested a lot of money in the monumental complex;
- the convent phase: in 1574, Pope Pio V destined the Markets and the overall area to the convent of Santa Caterina da Siena; the changes designed by the architect Peruzzi were relevant, so as to completely upset not only the appearance, but also the functionality of the complex;
- the years of the Governorate: between 1926 and 1934, it underwent further changes: the Fori Imperiali excavation project was commissioned by Senator Ricci, who restored the original architecture of the monumental complex through the Governorate;
- the contemporary era: following the Second World War, the Trajan Markets complex underwent a phase of abandonment: the changes that involved Via Quattro Novembre and Via dei Fori Imperiali created an increase in noise and atmospheric pollution, so the Markets of Trajan were relegated to a frame around the city traffic.

The function of the Markets of Trajan
In the past, they thought the Markets of Trajan had a purely commercial function, since the emperor was worried about the rationing situation in Rome. For centuries, people had believed the complex was the arrival point of supplies destined dispatched for the capital, at the time having also the port of Fiumicino available, as Trajan wanted. The investigation on the shape of the rooms - was similar to that of the tabernae - caused a change in the Markets' purely commercial function. The paved streets, that were the external paths, were not suitable for the transit of goods wagons, due to the stairs connecting the differences in height. The markets probably were a multi-purpose centre more than a commercial point; they probably were the site of buildings where administrative activities took place. The layout of the spaces tells it, the way they are connected, the paths connecting the various rooms, which probably were archives and offices, useful for specific services to the public. The central body probably housed the headquarters of the Foro Traiano prosecutor, a position that dealt with the administration of the monumental complex.

The archaeological complex as a cultural centre of the city
The museum centre of the Mercati di Traiano was inaugurated in 2007. Its name "Mercati di Traiano, Museum of the Imperial Forums" was chosen to indicate the willingness of the city of Rome to show the architecture of the Forums in a completely new way. In addition to the numerous sculptures, you can enjoy the reconstruction of ancient buildings, carried out with additions in stone and original fragments. The goal is to allow visitors to take advantage of the original appearance, feeling the perception a person had entering the spaces at the time the complex was built. In addition to the three-dimensionality of the rooms, you can therefore admire the figurative programs used by the imperial propaganda.
You can take advantage of an exhibition that begins with the Great Hall introducing the Forums. On the upper level, there are the sections dedicated to the temple of Mars Ultor and the Forum of Caesar: it is the internal area of the Forum of Augustus. Going on the same floor, you will arrive at the central body, dedicated to the Forum of Augustus, a model for all the Roman Forums in the various provinces of the empire.
However, the archaeological complex of the Mercati di Traiano is also a pole for the organization of events, workshops and exhibitions. The aim is to show the students of primary and secondary schools, especially by workshops and educational visits, the historical and architectural heritage preserved in the Markets and in the whole museum complex. It is indeed a heritage coming from the past, representing a precious common good to be known and shared. Visiting the Markets, the young but also adult visitors can increase their knowledge of Roman history.