Holidays in Rome: Rome the city of ... Obelisks!

As well as being famous for world-famous churches and historical monuments, Rome is also known for a massive presence of obelisks. There are 13 buildings of Egyptian origin in the urban context of the capital. No other city in the world boasts a similar quantity. Even Egypt, the historical motherland of obelisks, doesn't have a record, with only 9 obelisks. The first emperor who wanted to bring them to Rome was Augustus, at the end of the 1st century BC, after the famous battle of Actium, when the the kingdom of Egypt was defeated giving way to the nascent Roman Empire. After the dark years Rome experienced during the following period, at the end of the sixteenth century the obelisks regained their leading position in the architectural structure of the city. It was a period characterised by a strong power of papacy, especially during the pontificate of Sixtus V, dated to the second half of the sixteenth century. In addition to the 13 obelisks dating back to ancient times, today there are other 5 modern ones. If you desire to discover Rome from a different point of view, we propose you an itinerary based on the typical monuments arrived from Egypt, over two thousand years ago by the emperor Augustus, at the end of the battle of Actium. We will show you all the obelisks in the city, with some practical tips for their visit. Furthermore, we will suggest you the 5 modern obelisks made on the basis of those built in the past, indicating their exact position. Finally, a fun fact about the old obelisks of Rome.

The 13 obelisks of the city of Rome
Egypt hosts 9 obelisks, instead 13 instead are placed in the city of Rome. Although they are monuments with artistic roots in the Egyptian culture, the Italian capital surprises foreign visitors with its "Guinness Book of Records". After a careful reading of the history of those years, we should not be surprised that the largest number of obelisks in the world is concentrated in Rome: all the monuments present today were actually taken as spoils of war after the victory over Egypt, after the battle of Actium. The sack was inaugurated by Augustus, figure usually associated with the moment of the empire beginning, In a second period, defined by historians "papal Rome", the pontiffs determination allowed the obelisks rebirth. For this reason, Pope Sixtus V can be compared to Augustus, as responsible of this rebirth, although their roles are very different. Here you are a list the 13 obelisks in Rome. We added the name of the pontiffs responsible of the return of the old symbol of power and strength to the city before the eyes of enemy peoples and internal rivals in brackets.
- Flaminio Obelisk (Pope Sixtus V): Piazza del Popolo
- Lateran Obelisk (Pope Sixtus V): Piazza San Giovanni Laterano
- Esquiline Obelisk (Pope Sixtus V): Piazza dell'Esquilino
- Vatican Obelisk (Pope Sixtus V): St. Peter's Square
- Agonal Obelisk (Pope Innocent X): Piazza Navona
- Obelisk of Montecitorio (Pope Pius VI): Piazza Montecitorio
- Sallustian Obelisk (Pope Pius VI): Piazza Trinità dei Monti
- Obelisk of the Quirinale (Pope Pius VI): Piazza del Quirinale
- Obelisk of Dogali: at the thermal baths of Diocletian
- Obelisk of the Pincio: on the Pincio terrace
- Obelisk of Villa Celimontana: in Villa Celimontana on Celio hill
- Obelisk of the Pantheon: Piazza della Rotonda in the Pigna, Sant'Eustachio and Colonna districts
- Obelisk of the Minerva: Piazza della Minerva in Pigna district

The tallest obelisk is the one in Piazza San Giovanni Laterano, over 32 metres high (32.18 metres). Taking dimensions as a reference point, the second in order of importance is in Piazza Montecitorio, 30 mm high.eters. The Vatican obelisk, located in Piazza San Pietro, is 25 metres high, less than the Egyptian monument erected in Piazza del Popolo (Flaminio obelisk). During the period of the Papal Rome, the will of Sixtus V and the other pontiffs who followed (Innocent X and Pius VI) was to symbolically reaffirm the power of the Christian Church and its pontiffs. 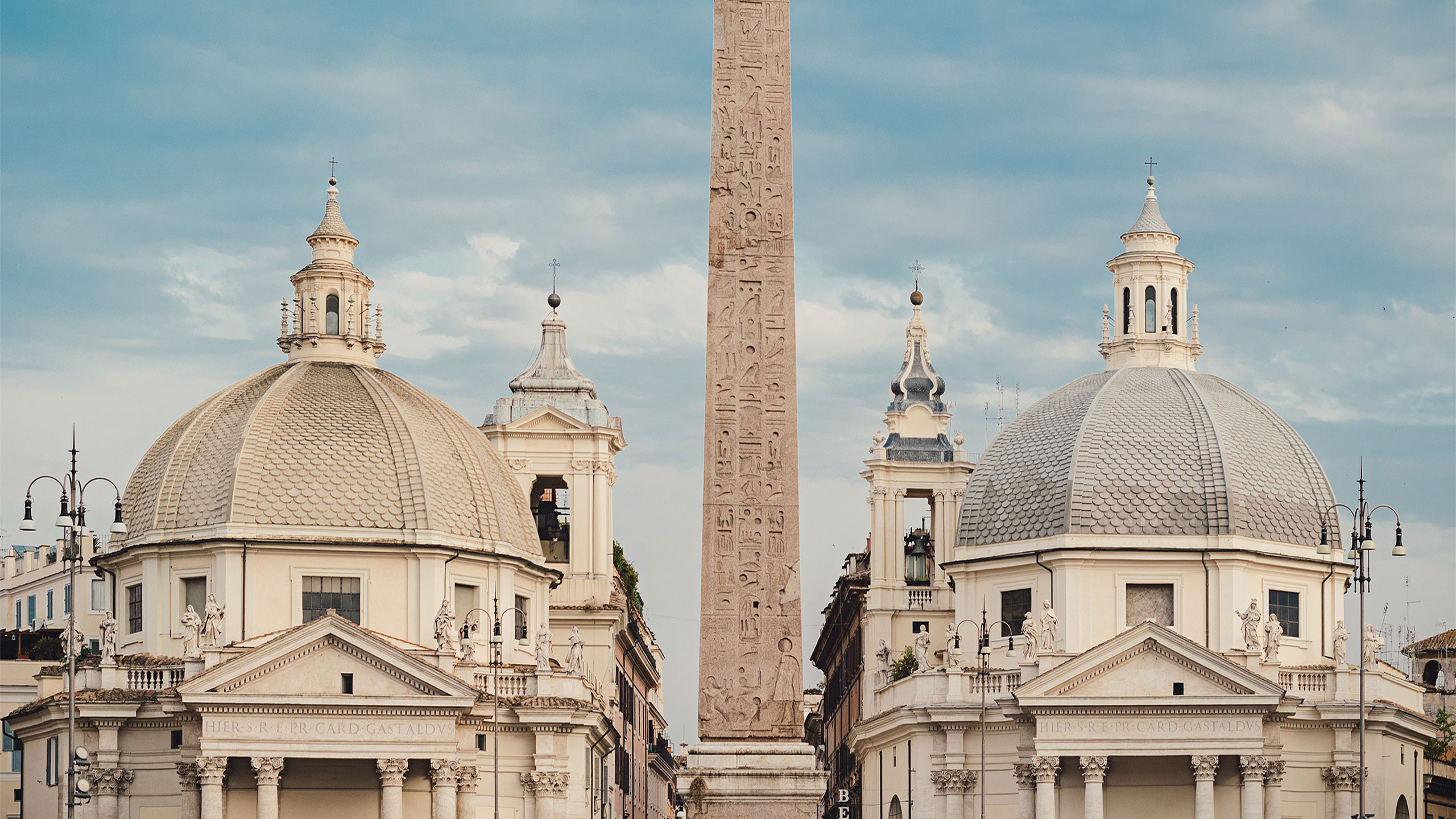 The 5 modern obelisks in Rome
In more recent times, Rome has been embellished with 5 modern obelisks. In chronological order, the obelisk of Villa Medici is the first one. The obelisk in Villa Torlonia, a building overlooking Nomentana street, dates back to the mid-nineteenth century. In the 1930s, during the Fascist regime, the obelisk of the Foro Italico, dedicated to Duce Benito Mussolini, was transported across the Tiber river. The fourth obelisk, in honour of Guglielmo Marconi, a well-known Italian inventor who died in Rome in 1937, is situated in the EUR district, erected a year before the 1960 Olympic Games. The fifth and last modern monument in Rome is called the Novecento obelisk, inaugurated in the early 2000s in the Europa district, in Piazza Pier Luigi Nervi. The work was carried out by the expert hands of the Italian goldsmith and sculptor Arnaldo Pomodoro.

A fun fact about the obelisks in Rome
Try to stay in the middle of the road between Via del Quirinale and Via delle Quattro Fontane for a few seconds. You will soon realize three obelisks are simultaneously appearing before your eyes: the Esquiline, the Sallustian and the Quirinal. You should know nowhere something similar exists. Thanks to its obelisks, therefore, Rome holds two records: the first is the total number of monuments of Egyptian origin, and the second is one how many of them tourists have the opportunity to admire standing in the crossing between two different streets. When you organize your next vacation in Rome, don't forget to go to the intersection of Via del Quirinale and Via delle Quattro Fontane to have an original experience. If you have a camera with you, you can give yourself a shot that is very interesting and peculiar.