Ferragosto in Rome: an opportunity for a picnic close to nature or to discover its countless treasures

Ferragosto can be the perfect opportunity to visit Rome, a chest full of treasures. The offer is really wide and the list of things to do and places to visit never seems to end. The possible alternatives are, however, basically two: a day of relaxation and fun by an outdoor picnic or a tour to discover the capital and its history. We will show you some possibilities we hope will make you curious.

A picnic in the countryside
Rome has got many green spaces where you can relax, read a good book, sunbathe and completely unwind.

Villa Pamphilj
Villa Doria Pamphilj, the park considered the green lung of the capital, is located on the Gianicolo hill and you can easily reach it by bus (lines 31, 33, 180, 710, 791, 870, 984); it is situated on a surface of 184 hectares, and it has seven entrances located in different districts (from Monteverde to Casaletto up to the Aurelia).
The park is divided in three parts:
- the “pars urbana”, where you can see the palace and gardens;
- the “pars fructuaria” includes the pine forest;
- the “pars rustica” where the agricultural estate is situated.
Your tour, on foot or by bicycle (the complex has a cycle path about 11 km long), can start from Porta San Pancrazio. Go past the Arco dei Quattro Venti and continue along the avenue to the Palazzina Corsini which dates back to the 18th century. Take Viale del Maglio to the Casino del Bel Respiro (Palazzina dell'Algardi), where you can see important works of art; then go down the staircase to reach the Giardino del Teatro. Your visit continues at the Doria Pamphilj Chapel: the building, dating back to the late 1800s, is surrounded by a picturesque pine forest that culminates in the Fontana del Giglio, where you can admire fantastic water games. Finally, the Villa Vecchia (built on the ruins of the Trajan-Paolo Aqueduct), the remains of a Roman necropolis, the Casale di Giovio, the Casino delle Allegrezze and the Giardini delle Delizie are worthy of your attention.
At the end of the visit, we suggest you to have a picnic: the complex actually has several fountains where to drink and a small bar, too. In the afternoon, you can, instead, play football or walk along the boulevards, where there are numerous benches to rest and chat. Finally, the western area of Via Leone XIII is perfect if you have children, because it has a large playing area.

Villa Borghese
Villa Borghese, certainly the most beautiful park in Rome, can be reached in different ways, but the most fascinating itinerary starts from Piazza del Popolo slope which gives you a wonderful view of the city. The park, located in the heart of the capital, is situated on a surface of about 80 hectares with English and Italian gardens, palaces, small woods, fountains, little lakes and statues (Lord Byron, Victor Hugo, and Goethe). The places worth of a visit are several, such as the so-called Aranciera where there are the Carlo Bilotti Museum, the Casale Cenci-Giustiniani, the Galleria Borghese, the Bioparco, the Casa del Cinema and the Civic Zoology Museum.
We suggest you a wonderful walk among the flora and the fauna, a picnic around the lake and a mini-tour inside the museums. Finally, there are different areas dedicated to children with a playground, little trains, ponies, inflatables Gamestation inflatable game station and much more.

The treasures of Rome
The Italian capital holds innumerable treasures: missing their discovery would really be a pity.

The most beautiful Roman squares
Rome is a real open-air museum and you can admire many of its masterpieces just walking. In the centre of Piazza Navona, you will find the famous Fontana dei Quattro Fiumi, by Gian Lorenzo Bernini. The four human figures, surrounded by a landscape of rocks and caves, represent the rivers of the four continents known up to that time (Nile, Ganges, Danube and Rio de la Plata). One of the symbols of the capital is Piazza di Spagna, whose name comes from the homonymous palace, location of the embassy of the Iberian state near the Holy See.
Once there, you can have a break in front of the Barcaccia Fountain, built in Baroque style by Pietro and Gian Lorenzo Bernini, in 1629. It is also a must to take a photo of the staircase that connects the square to Trinità dei Monti square by 135 steps. Then continue your tour to Piazza del Popolo where you can see the Flaminio obelisk in the middle and the two 'twin' churches: Santa Maria dei Miracoli and Santa Maria in Montesanto. 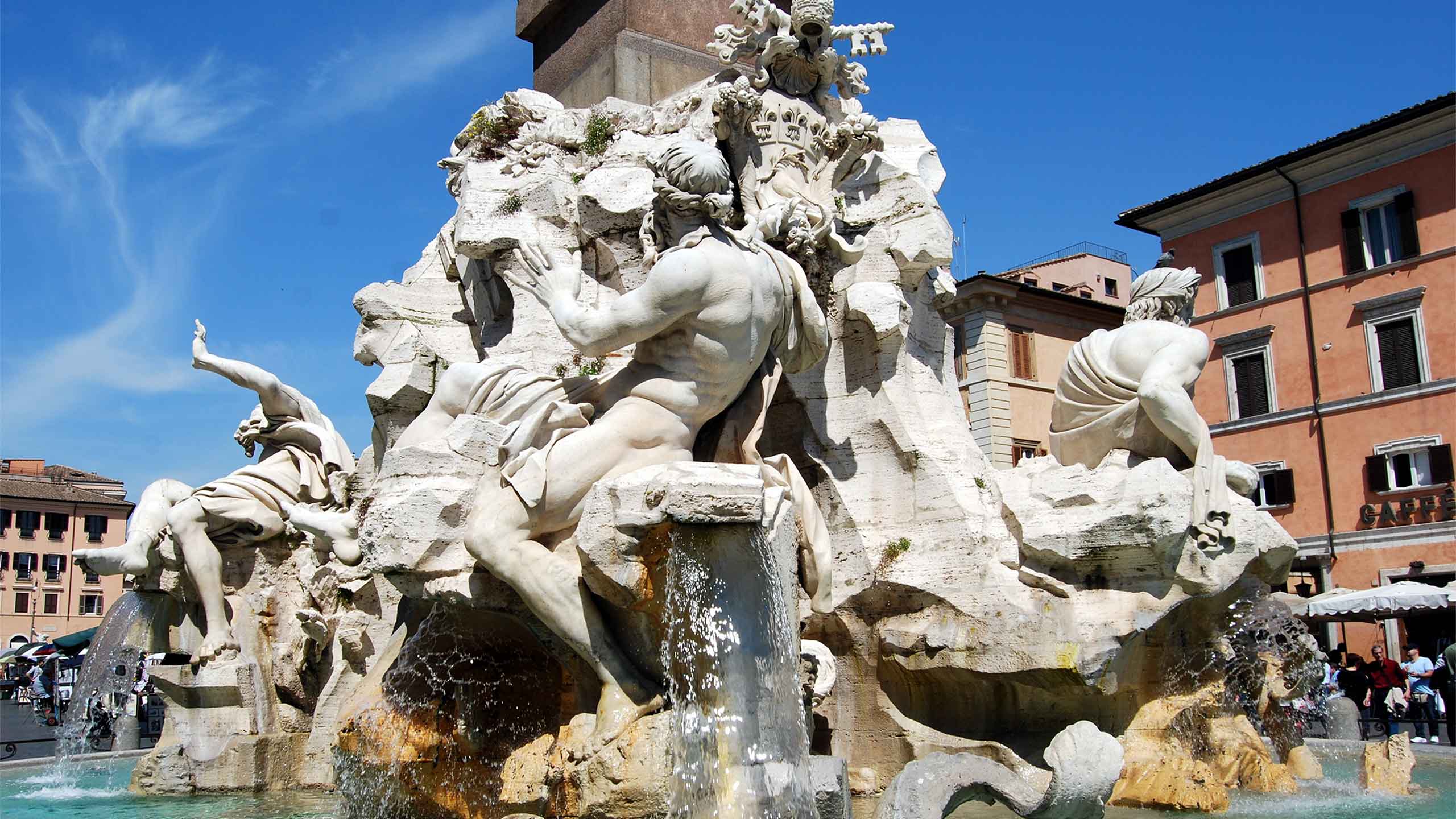 Discovering the ancient Rome
Your stay in Rome cannot end without a tour in the past. The Arch of Septimius Severus, located in the street with the same name, was built between 202 and 203 A.D., to pay tribute to the reign of the emperor and to celebrate his victories. The three arches complex has three passages (one central and two undersides), it is 23 metres high, 25 wide and 12 deep; on its surface, you can see some ancient reliefs describing the victories of Septimius Severus in Partia (current Iran and Iraq), and in Arabia.
There are valuable decorations and, among them, God Mars, the geniuses of the four seasons and the Roman soldiers are walking towards the Parts prisoners surrounded by carts pulled by oxen and horses. Your visit can continue at the Colosseum, the largest Roman amphitheatre. The majestic work, commissioned by Vespasian, could accommodate up to 50,000 spectators (some estimates say 70,000 seats): the most important people used to sit in the low rows of the cavea, whereas the upper part was the area of the common people. The complex was the stage of fights between gladiators, simulations of battles and theatrical performances. We suggest you to conclude this short tour visiting the Imperial Forums situated along the street with the same name between Piazza Venezia and the Colosseum.