Events in Rome: visiting Palazzo del Quirinale, residence of the President of the Republic, discovering its marvelous rooms and collections

The beauties of Rome are innumerable: from the Colosseum to the Imperial forums, passing through the Basilica of San Pietro and the Pantheon. Another jewel of the Eternal City is the Palazzo del Quirinale, a precious treasure chest of history and art.

Historical notes
You know Rome stretches over seven hills: the Esquilino, the Aventino, the Celio, the Viminale, the Campidoglio, the Palatino and finally the Quirinale. The name of the latter probably comes from the presence of a temple dedicated to the god of peace and agriculture, Quirino. Surely, it was the highest hill of the Roman Empire, with elegant patrician residences such as those of Virgil, Pomponius, Atticus and Martial. There also was a thermal complex Constantine wanted in 315 AD: nothing remains today except for important sculptural groups, among which the Dioscuri embellishing the Piazza del Quirinale.
After a period of abandonment in the Middle Ages, the hill had a renovation first thanks to Ippolito d'Este, son of Lucrezia Borgia, who wanted to build a casino there, but above all thanks to the commitment of Pope Gregorio XIII. The pontiff entrusted the design of his new summer residence to Ottaviano Nonni, otherwise known as the Mascherino.
After the interventions by Domenico Fontana, during the pontificate of Pope Sixtus V, thanks to Paolo V Palazzo del Quirinale assumed the aspect you can admire today, by the work of Flaminio Ponzio first and then by Carlo Maderno.
Finally, it is important to remember Gian Lorenzo Bernini took part in the splendour of the building, in the built of the circular tower and the Loggia delle Benedizioni in the square. 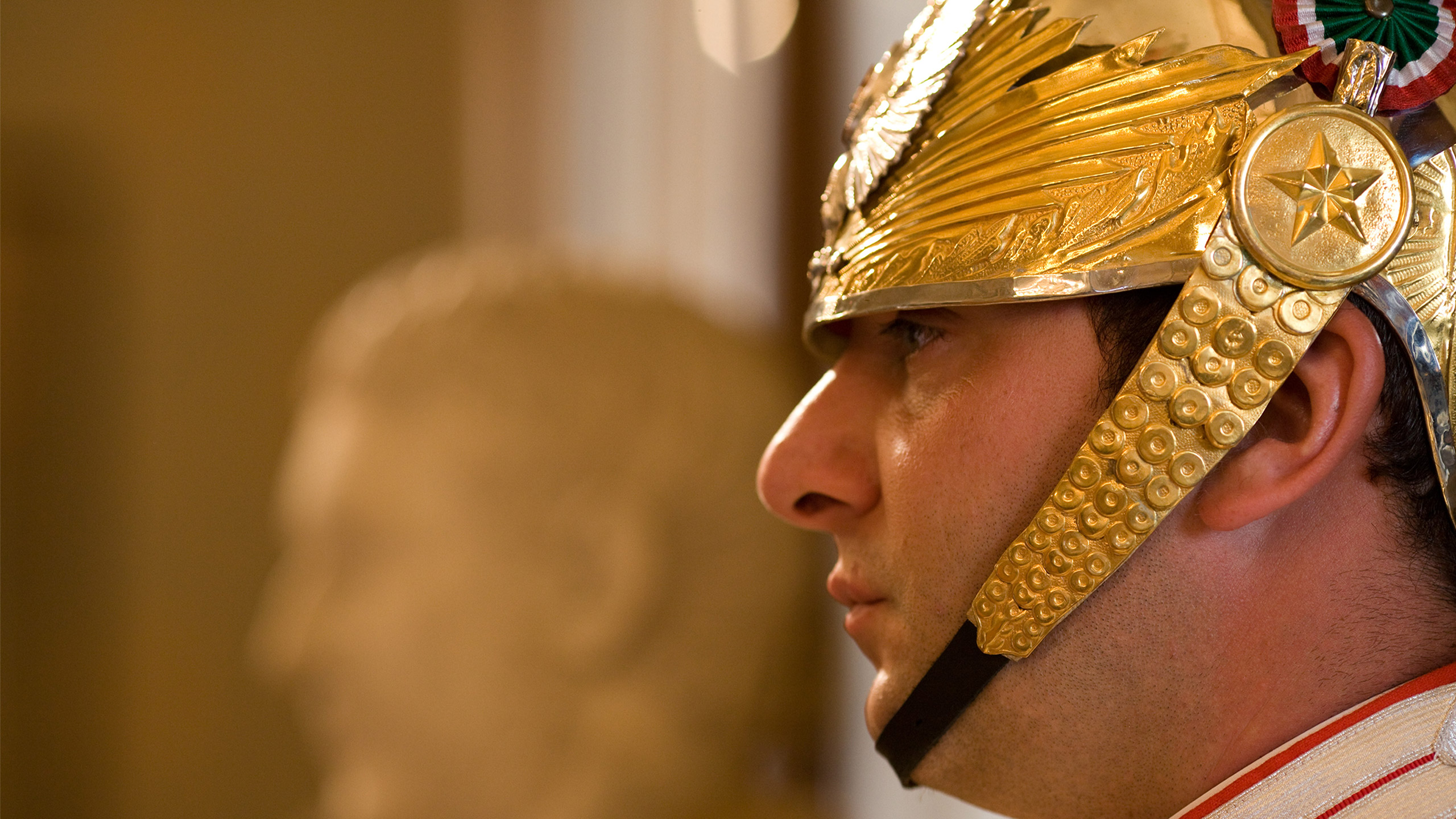 Beyond the Portal: Palazzo del Mascherino
The Palazzo del Quirinale is the sixth largest building in the world: it has 1200 rooms, only partly attended since 1947 by the current President of the Republic and his team. Mind the wonderful rooms you will visit were inhabited long ago, by the popes and later by the Savoys who redecorated the house adding pieces of furniture from other royal palaces in the country. Finally, do not forget the period Napoleon lived there!
The Portale del Maderno, located on the right of the façade, is between two columns and surmounted by an architrave, on which there are the statues of Saint Paul and Saint Peter: looking at the window, you can see an elegant high relief of the Madonna and Child on the top.
When you enter the building, you'll experience a full immersion in works of art of incredible value: pieces of furniture, porcelain, 261 , Italian and French Flemish tapestries, in addition to architectural works in front of you.
For example, the 1500s Palazzetto del Mascherino will appera in front of your eyes with a double lodge made of four arches. Inside the building, there is the splendid Scala del Mascherino, in its typical helicoidal shape with by travertine columns in its sides: this staircase was so admired, moreover suggestively illuminated by light sources coming from above, that Borromini himself created a copy for Palace Barberini.

From Pauline Chapel to the tapestries of the Quirinale
There are many rooms you can visit inside the Quirinale Palace, by booking an institutional artistic itinerary lasting 1 or 2 hours including a visit to the Carriages and Gardens.
The Pauline Chapel, with its golden vaults and the frescoes from 1818 simulating recesses occupied by the statues of the Evangelists, Apostles and Saint Paul, is most wonderful one: it is as big as the Sistine Chapel. After admiring the polychrome marble floors and the 17th century cantorum, enter the adjacent Salone dei Corazzieri: a huge room characterized by a perimeter decorated by a frieze depicting the embassies that came to Rome to meet Pope Paul V Borghese.
This hall is also accessed by the Scalone d'Onore, a seventeenth-century work by Pontius: going down to the crossroads of the two stairs, you can admire the Redeemer in Glory among the angels, made by Melozzo da Forlì.
The Sala degli Arazzi di Lilla takes its name by the five tapestries from the French city of Lilla, dating back to the 18th century, depicting scenes of everyday rural life: so beautiful as it appears to your eyes today, it did to Napoleon and then to Queen Mararet, who both made it their own bedroom.
The tapestries has certainly always been a typical feature you will find in your tour: there is another Sala degli Arazzi, containing works by the French Boucher, enriched by Rococo pieces of furniture, and in the Napoleonic room, three tapestries are dedicated to the adventures of Don Quixote by Cervantes.

Worldliness and culture
During your tour of Palazzo del Quirinale, you will admire the Sala degli Specchi, today Sala delle Udienze of the Head of State, but in the past hall of dances and social events: around you, a blaze of white, of gold and mirrors reflect the lights coming from the majestic Murano chandeliers. There are frescoes depicting dancers suspended in the sky, recalling ancient glories.
One of the most evocative places of Quirinale Palace is the Piffetti Library: unlike the other areas of the building, no gold characterises the library, but only wood of olive, rosewood, and yew. These natural materials cover the shelves, with inlays made of ivory, such as the tortoise shell consoles, prints and sheets. The books date back to the 1800s, in many cases with the Savoy coat of arms.
The Royal House of Savoy ordered the built of large stables, where there are cars that will make you travel time: there are some so precious and ancient carriages, such as the Berlingotto of late 18th century, rich in gold and paintings, funeral carriages, pony buggies and even small carriages for little princes.