Does purgatory exist? The legends about the church of the Sacro Cuore del Suffragio, the only one Neo-gothic in Rome

The Church of the Sacro Cuore del Suffragio is situated in a district along the river, named Prati, and despite of its Neo-gothic style, it was inaugurated in 1921. It is one of the most mysterious holy buildings of the Italian capital, really worth of a visit, also because of the several legends connected to the purgatory souls.

The church of the Sacro Cuore del Suffragio
It is the only one church in Rome, built following a New-gothic style, reason why it is famous by the name of "little cathedral of Milan". Its position in the middle of other more or less modern buildings astonishes people, because the white stone shines, and its architecture makes it a place with no time.
In addition to the artistic value, it is worth of a visit also because of the museum about the purgatory souls, were Roman believers used to go to pray.
The construction of the church took place thanks to a French missionary - Victor Jouët -, member of the Sacro Cuore di Gesù class, sent to Rome to celebrate a mass in the little chapel of the Madonna del Rosario, existing even before the church was built.
It was destroyed by a fire in November 1897, even if the missionary himself tried to save it. When the flames finally got extinguished, the believers discovered an image on a wall. It represented the suffering face of a person with a body damaged by the fire. The clergyman interpreted it as a symbol to represent the request of more prayers, by a holy soul.
After this miraculous manifestation, largely trusted by the believers, many pilgrims started to go there. 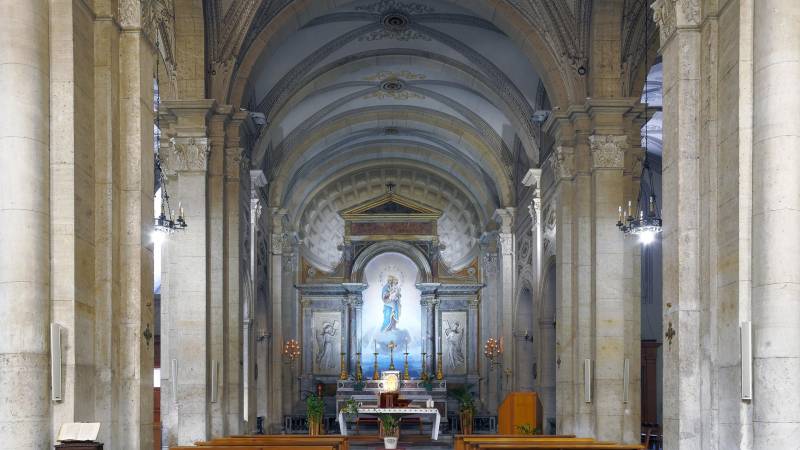 The French clergyman so understood it was necessary to build a bigger church. In the same place, there was an uncultivated land, and the missionary succeeded to collect money by charity donations, to build a new church. The plan we can see nowadays was by Giuseppe Gualandi, engineer inspired by the churches built two centuries before, in the northern Europe. His father was an important exponent of this architectural style. Another reason why the engineer preferred the New-gothic style was also the small surface, where to build a high construction. The work began in 1908, and finished 10 years later.
Led by his devotion to the purgatory souls, and by the miracle, the clergyman traveled around Europe to find other similar symbols. In a few years, he collected some evidences, dating back to a period between the 1636 and the 1919, bringing them to Rome, creating the museum.

The Museum of Souls in Purgatory
The Museum of Souls in Purgatory was set up in the sacristy of the church and it still is the destination of many pilgrims. The entrance is in the center of the right nave.
According to the believers’ faith, this is the evidence of a real passage to a second life, purifying souls before meeting the glory of God. For just curious people, anthropology and strange phenomena lovers, it is a place rich in mystery and culture. The Gothic church itself gives a very mysterious sensation, as well several people consider it a place inhabited by ghosts or affected by curses.
The signs left by the souls often are handprints on clothes, books, pillows, and other objects. Each one of them is connected to peculiar stories about mysterious events.

Does purgatory exist?
Purgatory exists as well as heaven and hell do, according to the Counsil of Trento.
Saint Catherine from Genoa used to talk about purgatory as a place where souls could purify themselves by an inner fire, representing the pain of the impossibility to see God's face.
It is described as a sufferance and penitence place, where hope and the joy of being saved by the believer’s prayers really exist.
Here it is the principal believers trust, so that they are sure the handprints on the object stored in the museum are genuine.
The French priest himself collected them verifying they were original and really connected with religion.

Some stories about the Museum of the souls in the purgatory
All the stories connected to the objects those souls should have touched have one feature in common: the prayers of the dead people close friends or relatives.
Many of them were members of holy classes, and they have been able to advise they are relatives to live a pure life.
One of them told their son to stop having a crazy life, printing they're hand on his shirt. The event took place in 1789 in Belgium, in Wodecq: his mother appeared to him 27 years after her death, after 11 nights in which the guy had been woken up by sinister noises, making him thinking he was mad. He completely changed his life, and dedicated himself to the church, dying in 1925.
Another case is about an abbot from Mantova: he left four prints, in 1731. The evidence came from the confessor - father Gazala -, who told the way the soul appeared to Isabella Fornari, the abbess of the Clarisse di Todi.
Another story tells about a woman appearing more than once to her daughter-in-law, in Germany, for 30 years after her death, in 1815. Every time, she saw her coming down the stairs of the granary, affected by a sad expression, without saying anything.
The woman asked her about her opposite, according to what the priest had suggested her: the soul expressed the desired of a pilgrimage to Nostra Signora di Marienthal sanctuary, to let her do two messes, in order to have free access to the heaven. She left a print on a book, as evidence the passage had taken place, as she had promised to her daughter-in-law.