Do you know the smallest populated island in the world? Let's discover Tiberina Island’s legends

The little island makes river Tiber very peculiar, in the centre of Rome. It is about 9 metres large, and about 300 metres long, and it is connected to the land by the 62 b.C. Ponte Fabricio, connecting it to the Campidoglio, and by the 46 b.C. Ponte Cestio, connecting it to Trastevere district.
It was surely important in the ancient time, in order to cross the river, but it also had a holy value, thanks to the several legends talking about it.
Let's discover something more about the thousand years old legends, jumping back in time.

From stone and wheat…
The most reliable legend tells in 501 B.C., the Roman people threw an enormous quantity of wheat - property of the Tarquinii’s family - in the River, launching stones to protest and send Tarquinii away. The enormous stone and wheat mass created the natural foundations of the island, currently called Tiberina. It is a legend, supported by the studies made at the end of the 19th century on the River Banks. The geologic investigation declared the island was made of volcanic rocks, and it collected the earth to the river, finally becoming an island.

Aesculapius, the snake and the stone ship
If the legend connected to Tarquinii the Superb didn't persuade you, it will surely be more fascinating the one telling the connection of the island with Aesculapius, the god of medicine.
We need a flashback until 291 B.C., when the plague affected the city. The clergymen who read the holy books decided to send a delegation to Epidaurus, in Greece - that site of Aesculapius’ cult.
The ships came back bringing a snake representing god Aesculapius, in the shape of his favourite animal. But the snake escaped jumping in the river, near Tiberina Island. Roman People built a temple to honour Aesculapius, in 289 B.C., and they gave the island the shape of a trireme, decorated by an obelisk in front of the temple, to be similar to a real ship with stele playing the role of the mainmast, and some travertine blocks on the banks, to simulate the stern and the bow. 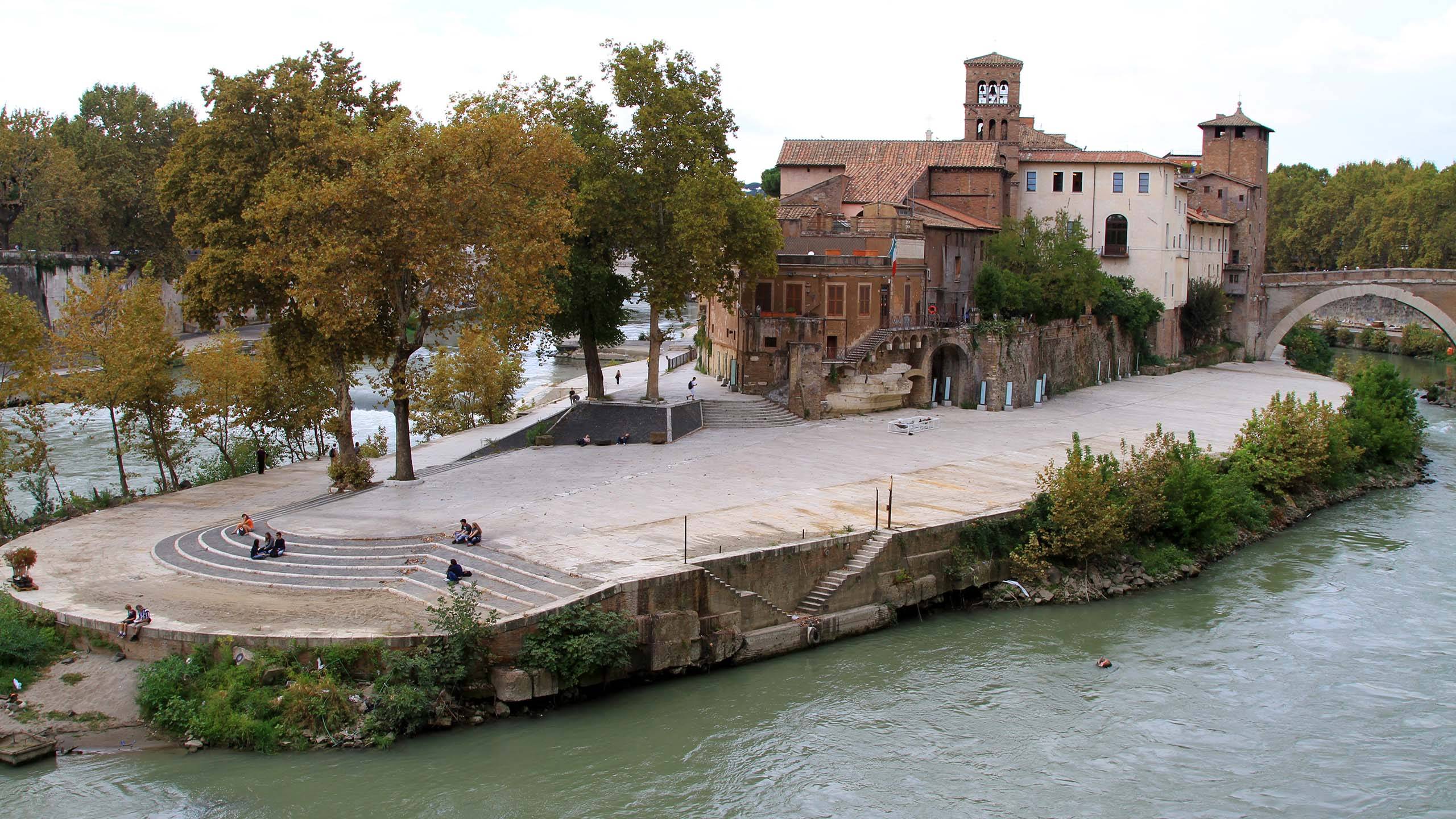 From then on, Tiberina Island has always been considered a place where to treat sick people, so that several buildings were built to host hospitals by the centuries, as we can read on the copious inscriptions and ex-voto.
Visiting the island nowadays, you will see the obelisk, in other words the main mast of the ship - only two fragments have been preserved at the National Museum in Naples - as well as the temple dedicated to Aesculapius - some of its parts can be observed in the close San Bartolomeo all'isola Church. Inside of it, you can actually see the ancient columns of the Roman temple, as well as the ancient mediaeval spring, where the price used to take miraculous water to treat and benedict sick people.
The temple was actually used as a hospital, as we can see by the inscriptions people left, thanking for having been treated from untreatable diseases.
In the middle of the island there was a problem with the cross Roman people used to call the "infamous column", because the names of all the people who didn't take part to the Easter Mass were written on it. The column - accidentally broken by a cart - was finally substituted by a monument from 1869, with the cross on the top, and some decorative statues on the basis, representing St. Francesco d'Assisi, St. Giovanni di Dio, and St. Paolino da Nola.

And as it was in the past, the island has the same function nowadays.
During the Middle Ages, a building for treating sick people was built, managed by friars. From that far 1584, we still see Fate bene Fratelli Hospital, attended by many pregnant women. On the island, there is also a part dedicated to the Jewish Hospital.

The island today
The tourists visiting Rome considers the island a very interesting destination, not only during the summer when many cultural exhibitions take place, during the beautiful Roman nights.
Many stories book about the island, also after the ancient Roman times. During the middle ages, the noble Pierleoni family ordered to build a defense tower we can still see it nowadays, launching the interest for the island. If have a look to this building, you will be able to see a marble head representing a young woman, from the first century, giving the name to the tower as "torre della Pulzella" (in Italian, the term "Pulzella" means girl). Here you are a fun fact about Tiberina Island: there is a lamp always on inside San Giovanni Calabita church, with its copy outside, it is the famous "Madonna della Lampada". The legend tells during a terrifying flood of the river, the Tiber completely cover the island without switching the flame off: the lamp resisted even more shining, sending the water away.

The island hosted many Jewish Roman citizens, when they looked for protection, during the Nazi persecution of the Second World War.
There are not private houses on the island, houses on the island but there is a historical pharmacy, and ice cream parlor, a bar, and the famous "Sora Lella" restaurant, cooking Roman food, opened and managed by Elena Fabrizi, Aldo's sister. The sons and nephews inherited it: nowadays it is a benchmark everybody wants to visit, to taste traditional Roman food.
From the island, You can admire the "Ponte Rotto" - the broken bridge -, the remains of what in the past was the ancient Pons Aemilius - from 241 AC - built by Manlio Emilio Lepido, and the longest brains of the city, characterized by a lot of legends.