A tour of Lazio can't miss a trip in Viterbo, the city of the thermal baths. As well as Anagni, Viterbo also has its own Pope palace, ancient papal site during the 13th century. The majority of people know the name of the province as a thermal baths site, but it has much more to offer, even from a historical and artistic point of view. In recent years, rumors told about of a possible application of medieval Viterbo as a UNESCO world heritage site, witnessing the numerous monuments of great cultural interest hosted by the city. If you are planning a two-day stay, you can think about visiting some lovely villages nearby. Among them, we can include Montefiascone and Bomarzo. In the outskirts of Viterbo, we finally point out the presence of Lake Vico and Lake Bolsena, the two most famous ones in the territory of Tuscia. If you have five minutes available for us, we will now tell you about the most important things to see in Viterbo, as well as some practical tips to complete the visit including even the most precious gems located just a few kilometres from the city of the thermal baths.

Visiting Viterbo
There are many attractions in Viterbo. Starting from the thermal baths, with the Bullicame spring as flagship of the city, known throughout Italy as a SPA. It must be said, however, the baths are not the only one jewel. The historical centre is also noteworthy, where the Palazzo dei Papi, the Palazzo dei Priori and the cathedral of San Lorenzo stand out. Finally, the districts of Piano Scarano and San Pellegrino are of great interest.

Viterbo thermal baths
Viterbo has always been known as the city of thermal baths. Every year, thousands of visitors decide to stay there for a weekend, from spring to autumn, to take advantage by the thermal properties of its springs. The most famous is the Bullicame thermal spring, whose water has a temperature of about 58 degrees. The water of Viterbo is especially recommended for treating and preventing skin and genital and respiratory system diseases, and metabolic disorders. In addition to the Bullicame baths, another famous site is the Terme dei Papi, whose waters directly come from the Bullicame spring. They owe their name to Niccolò V, the pontiff in love with the thermal baths of Viterbo enough to demand the built of a palace (now known as Bagno del papa) where to stay during his frequent visits.

The historical centre of Viterbo
The most important historical building in the old city of Viterbo is the Palazzo dei Papi. It is situated where the then pontiff Alexander IV chose to transfer the Roman Curia due to the hostility of both the bourgeoisie and the Roman people, since the middle of the 13th century. The longest conclave in history - 3 years - took place at the Palazzo dei Papi in Viterbo. There, John Paul XXI died, struck by the collapse of a part of the building. The other most famous building in Viterbo is the Palazzo dei Priori. Unlike the Palace of the Popes, it can be visited for free. Today, it is the seat of the municipality of Viterbo and it hosts some beautiful frescoes from the Renaissance period. The Palazzo dei Priori is directly connected with the Podestà palace (also a municipal seat) by a corridor recently transformed into a modern Pinacoteca. The three most important rooms are the Council hall, the Aurora hall and the room of the Landscapes.

The neighbourhood of San Pellegrino in Viterbo
Ther most famous neighborhoods in Viterbo are two: Piano Scarano district and San Pellegrino district. Both are medieval districts, whose origin is attested around 1200, a golden age for the city of Lazio. The most important is San Pellegrino, which boasts the record of a medieval district with the largest extension in of Europe. The main attractions are the church of San Pellegrino and the Palazzo degli Alessandri. The first building dates back to the mid-11th century and it is situated in the square with the same name. The second one dates back to the first half of the 13th century: Pope Innocent IV issued a papal bull, declaring it an inviolable artistic heritage. 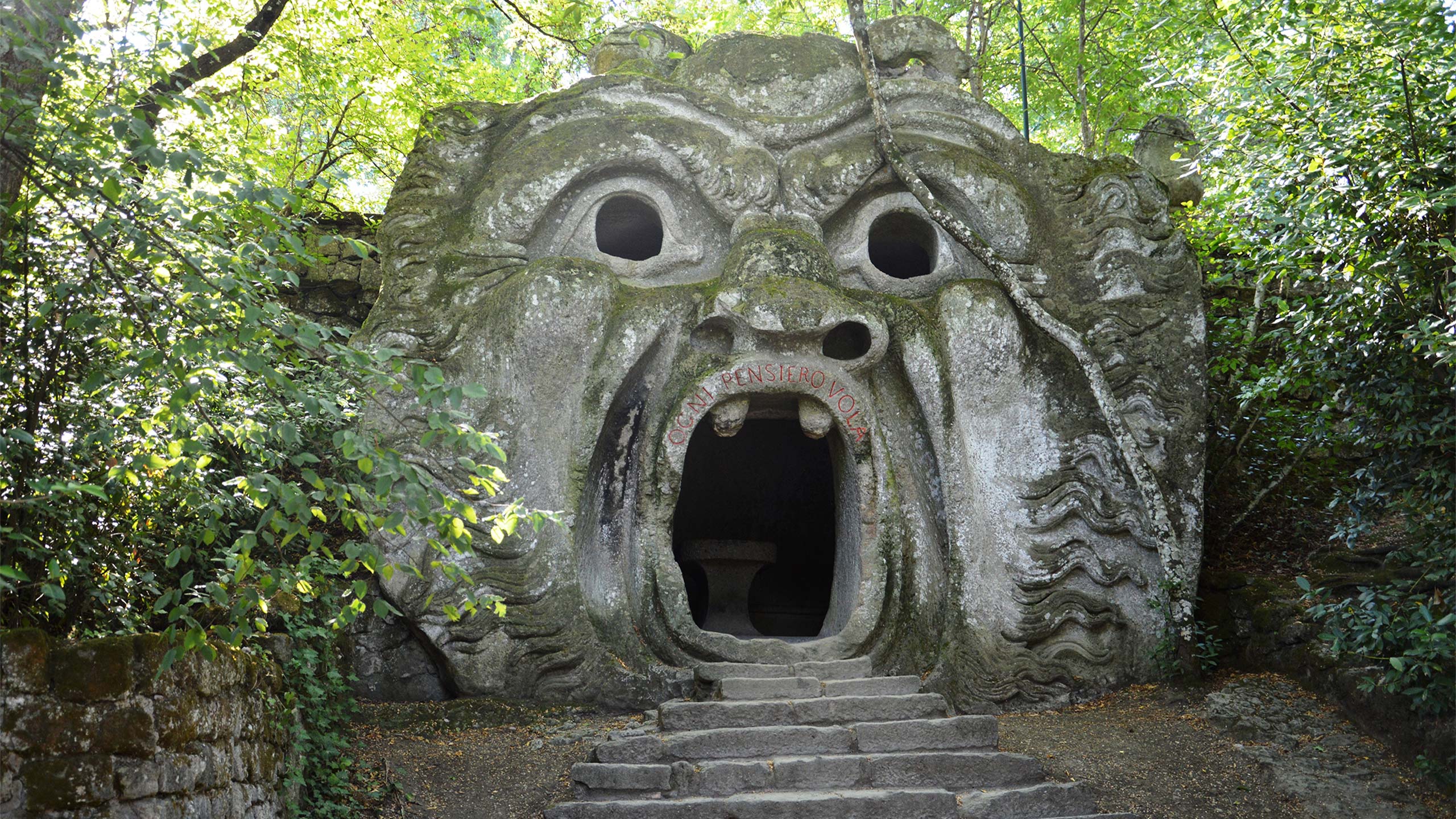 Surroundings of Viterbo
As anticipated in our introduction, around Viterbo you have the opportunity to visit suggestive villages, including Montefiascone and Bomarzo. The first town is located near Lake Bolsena and it is characterized by the high presence of tuff, which has allowed the Lazio village to become a benchmark for the regional wine production. Among the most interesting attractions to see in Montefiascone, we can mention the fortress of the Popes and the church of San Flaviano. In the territory of Tuscia also the village of Bomarzo is situated, famous for hosting the park of the Monsters (also known as Sacro Bosco). One of the monuments of greatest cultural and artistic interest is Palazzo Orsini.

How to get to Viterbo
The distance from Rome is about 80 km, about less then one hour and 30 minutes by car. From the centre of the capital, follow the signs for Via Salaria, continuing towards Viterbo. From Perugia, it takes 125 kilometres. It is a journey of about 90 minutes by car, with normal traffic conditions. Once out the town of Perugia, follow the road signs for Via Cassia Nord and the regional road 2 of Viterbo. When you pass the town of Orte, on the highway 675, after a short while take Viterbo Nord exit. Finally, if you depart fro, L'Aquila, it takes about 200 km. The journey is about 2 hours long. First drive south on the A24 motorway, then enter the E45/A1 Firenze-Napoli. From there, exit at Orte and then take the junction for Viterbo entering the state road 675. After about 25 km, take Viterbo Nord exit.