Discovering Lazio: Anagni village, the city of popes and the Sistine Chapel of the Middle Ages

Anagni is one of the most interesting historical villages of Lazio. City of the Popes and Sistine Chapel of the Middle Ages, Anagni offers visitors an important artistic heritage. It is located in the south of Rome, in the province of Frosinone. Its history is profoundly linked to the Middle Ages and to the popes, including Pope Benedetto Caetani (Boniface VIII). At school, all the students learn its name by the episode Boniface VIII was protagonist of: the famous slap of Anagni. In addition to the historical city centre, tourists have the opportunity to discover other notable places of interest in the surrounding area, including Lake Canterno and the town of Fiuggi. If you can spend five minutes of your free time with us, we will show you what to see in the village of Anagni and we will give you some practical tips for a one-day excursion in the province of Frosinone visiting other Ciociaria gems, not far from Anagni.

Visiting Anagni
Anagni is one of the hidden gems of Lazio. Famous for being city of the pontiffs, it can be visited in one day. Among the main attractions, there are: the palace of Bonifacio VIII, the cathedral of Santa Maria, the crypt of San Magno and the oratory of Thomas Beckett.

Anagni, the city of popes
The tour of Anagni starts from the palace of Bonifacio VIII, one of the most important historical buildings of the city of Lazio. Located in the historical centre, the palace was built in the first half of the 13th century, initially as a residence of the Conti family. Later on, the noble residence housed one of the best-known popes in the history of the Middle Ages. There, Pope Benedetto Caetani suffered the famous insult by the rival Sciarra Colonna. The main enemy of Boniface VIII, together with the French army, entered the papal residence and publicly slapped the pontiff. Caetani immediately fell into disgrace and after him, the Papacy in Italy experienced decades of decline. Anagni and the population were affected by the crisis of the Italian popes, losing the protection of the Church of Rome, too. Today, the palace of Bonifacio VIII is open to the public, to visit the chessboards room (where the episode of the Anagni slap took place) and the pigeon room, named by its splendid fresco. 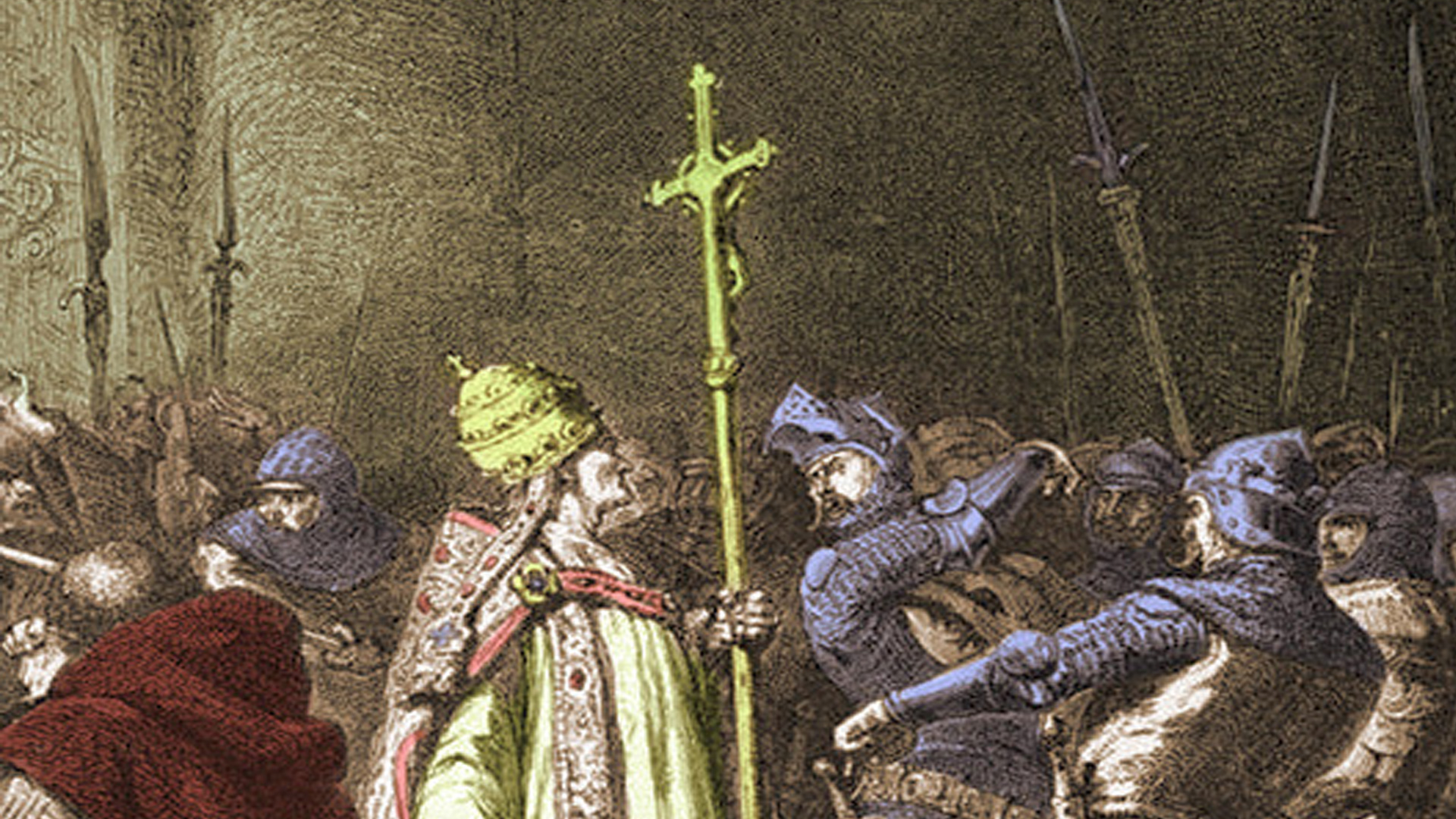 The Sistine Chapel of the Middle Ages
Anagni is also famous for the Sistine Chapel of the Middle Ages. During the tour, you can admire it inside the crypt of Saint Magno, in the cathedral of Santa Maria. The Sistine Chapel of the Middle Ages, as it was renamed in the past, is embellished by frescoes dating back to the 13th century, by a still unknown author. Once inside the crypt, tourists can see one of the artistic masterpieces of the whole Lazio. Another place inside the religious building dedicated to Santa Maria is the oratory of Saint Thomas Beckett. The building is situated on the remains of an ancient temple. According to art historians, the oratory was built in the same area where in the past the cult of Mithras was celebrated, very well known during the first years of the Roman Empire. The cathedral is located in the Innocent III square, one of the most famous popes of the early 13th century. From the square, it is possible to admire the lodge of Bonifacio Benedicente, part of the cathedral facade. Whoever visits the village of Anagni for the first time gest astonished by the beauty of the square, considered one of the most beautiful of Lazio. During the summer season, it hosts the Festival of Medieval and Renaissance theatre.

Surroundings of Anagni
After the tour of Anagni, if you have time, you can make an excursion to the lake of Canterno and to the city of Fiuggi. We suggest you to plan it during the spring season, so as to enjoy a perfect climate that will make your stay even more special.

Lake of Canterno and Fiuggi
Lake of Canterno is one of the most beautiful places in Ciociaria, just 20 km from the town of Anagni. Its main feature is the periodicity of the peculiar the phenomenon of its sudden depletion: that's the reason why it has been called "ghost lake". Over the last few years, thousands of tourists before or after visiting the renowned town of Fiuggi stopped there to admire the splendid natural setting given by the lake, overlooked by the Ernici mountains. It is impossible not to mention Fiuggi among the most popular tourist destinations in the surroundings of Anagni. The fascinating Lazio village is inhabited by about 10 thousand people, and it is nationally known for its thermal baths. Fiuggi also hosts an historical centre of considerable historical and artistic interest, thanks to the presence of several important monuments, such as Palazzo Falconi, whose built dates back to the eighteenth century. Moreover, the Lazio thermal centre can count on the fascinating collegiate church of San Pietro Apostolo.

How to get to Anagni
The village of Anagni is easily reachable from both north and south. If you depart from Rome, follow the directions to the Circonvallazione Tiburtina/Tangenziale Est at the beginning, then enter the Grande Raccordo Anulare and, from there, continue along the A24. After less than 20 km, take the exit for A1/E45 towards Naples, keeping going on the E45 for about 45 km, until the exit for Anagni-Fiuggi. Once out of the E45, finally follow the signs towards Anagni. The total distance is about 70 km, less than one hour. If you depart from Naples, from the centre of the Campania capital, follow the signs towards A1/E45 motorway and continue straight ahead until the exit Anagni - Fiuggi, after passing the cities of Caserta and Frosinone. It is about 160 kilometres far. Finally, if you planned a departure from L'Aquila, enter the A24 motorway heading south, until you take the E45/A1 Florence-Naples exit, shortly after the town of Tivoli. From there, finally follow the exit Anagni-Fiuggi. The distance from L'Aquila is 140 km, for about 90 minutes by car.