Caravaggio in Rome, a free tour to discover his masterpieces

Michelangelo Merisi da Caravaggio, the great Lombard artist who lived between two centuries - sixteenth and seventeenth - was compared to a sort of Homeric hero: on the contrary, we can say he represented the darker side of Ulysses, a tormented man, whose life was a real odyssey among trips and escapes, excesses and vices that took him around the world.
Differently from Ulysses, he had no destination but a need to escape, often from himself, his loneliness, his wretched and quarrelsome nature that often made him living isolated by society. He was a lonely man, he surrounded himself by drunk people, prostitutes, thieves and gypsies, his real source of continuous inspiration. Beyond his unregulated life, it is undeniable Caravaggio was a true genius who found the only reason for living in painting, for a complete satisfaction. Due to his adventurous existence that led him to travel a lot, his paintings can be found everywhere, in Italy and abroad.
When he was young, immediately after the death of his mother in 1590, Michelangelo moved to Rome. He was just over twenty. At that time, Rome was pervaded by a strong patronage among the patrician and noble families, characterised by strong ties with the Pope's court. An environment certainly not appropriate to the character of the painter who actually lived in poverty, in the early years in the city. In 1595, he met Cardinal Francesco Del Monte who, having given him his favour, made him famous. From that moment on, thanks to his genius and his innovative paintings, he upset the world of art, of clergy and of Roman intellectuals, with a celebrity that proportionally increased with the scandals he was usually involved in. From 1606 - year when Caravaggio was forced to begin his odyssey due to a murder committed against Ranuccio Tomassoni from Terni - he started escaping from Rome to avoid the capture, seeking asylum in Naples, under another government.
During his stay in Rome, he was commissioned many works. Some of these are located in the museums, others can be discovered for free in the churches of the historical centre of the city; if you are particularly curious, then you can take a walk to discover the house where he lived and some anecdotes about it. Let's discover an interesting walking path on the trail of Caravaggio.

First step: Basilica di Santa Maria del Popolo
The basilica is located in Piazza del Popolo, easily reachable from any area of Rome, thanks to the nearby underground station Line A - Flaminio stop. In 1600, the painter had a very important commission from the treasurer of Pope Clement VIII, for the realization of two paintings to be placed in the chapel of Santa Maria del Popolo. The subjects had to concern "the Crucifixion of Saint Peter" and "the Conversion of Saint Paul". The first versions of the paintings were rejected while the others were accepted and placed where can still see them today. Since Peter and Paul represent the columns of the Catholic Church, Caravaggio gives no space to the setting, focusing only on the characters. In the "Crucifixion" he represents the theme of death with great strength - as it was a very important topic for him, often expressed by several details - showing the contrast between the physical effort of the executors and the abandonment of St. Peter's body.
Please, observe the face of the Saint, represented as a simple old man suffering an absurd martyrdom, showing the expression of a total submission to pain. The darkness of the figures is a prerogative of the painter, who uses it to highlight the figures emerging thanks to the light. In the "Conversion of St. Paul", a serene condition of acceptance emerges by Saul; the open arms are the fulcrum of the painting, looking for the divine light, without the real presence of Christ and the angel - as it was in the first version of the Odescalchi collection - whose presence in this case is only intuitive.

Second step: Basilica of Sant'Agostino in Campo Marzio
Let's continue the tour, in Via di Ripetta and, once you pass the Ara Pacis, you will get to Piazza Borghese; nearby there is the Roman house of Caravaggio - where he lived from 1603 to 1605, according a long investigation done on the documents of the time. The residence - a building owned by a woman called Prudenzia Bruni - was located in Vicolo San Biagio - now called Vicolo del Divino Amore, connecting Piazza Borghese to Via dei Prefetti -, perhaps at the current street number 19, as it seems to be exactly like what the description of the ancient building says: two floors, with a courtyard, and a well and a small vegetable garden.
The importance of the location of his house lies in the fact the owner accused Caravaggio of having damaged the ceiling to filter the light necessary to paint the paintings; you understand this would be very relevant for a deep analysis of his painting techniques and his use of light sources. After Vicolo del Divino Amore, you can reach Via dei Prefetti, then turn left to Piazza Campo Marzio and go right into Via dei Portoghesi, then continue on the left into Via dei Pianellari: you arrive at the second step of the tour, the Basilica of Sant'Agostino, where the famous painting "Madonna dei Pellegrini" is situated. It caused many negative critics, both because the pilgrims in front of the Madonna were depicted with muddy and dirty feet, and because the Virgin was portrayed as a normal commoner standing at the door with her child in her arms. But the real scandal was the model, probably a certain Lena, a lover of Caravaggio and a former prostitute. 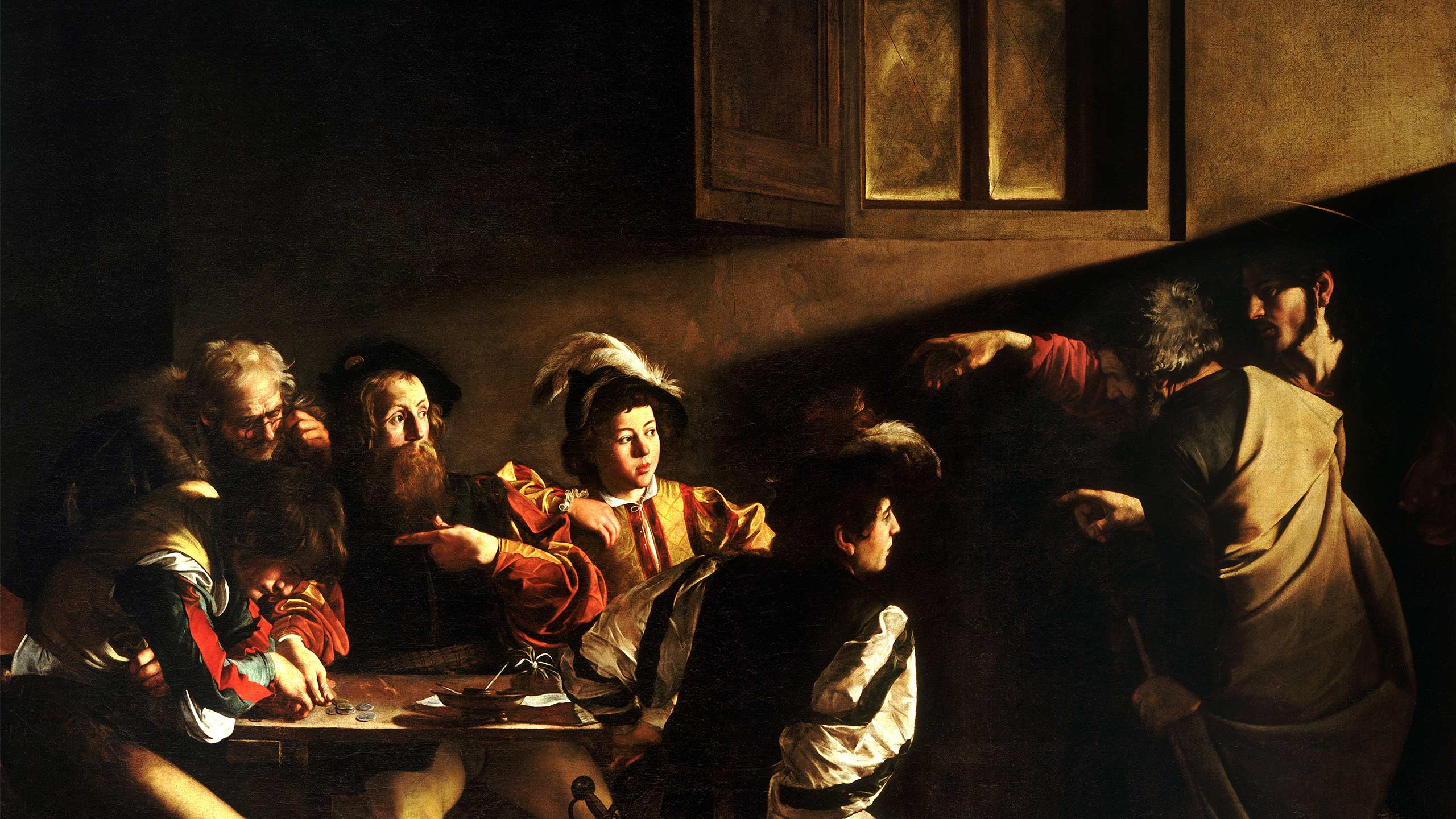 Third step: San Luigi dei Francesi
Leave the basilica of Sant'Agostino behind you, turn right into via della Scrofa and get to Piazza San Luigi dei Francesi where there is the homonymous church, housing three paintings by the artist. They were the result of the first important order in Rome, for the Cappella Contarelli.
The "Vocation of St. Matthew" refers to an episode of the Acts of the Apostles in which Matthew, counting money, is called by Christ, whose imperious gesture is accompanied by a beam of light. The second painting is the "Martyrdom of St. Matthew" in which the Ethiopian soldier approaches the saint, already on the ground, to prevent him from making religious propaganda. All the characters go away horrified, almost boosted by an invisible force while the angel approaches St. Matthew with the palm of martyrdom. In "St. Matthew and the Angel" you can clearly see the inspiration the Saint had by the angel. Please, focus on his hands, his counting on the stool his knee is, in an unstable position to underline his wonder before that vision.