Archaeological areas of the eternal city, guarding the true story of the ancient Rome

Rome, one of the most beautiful cities in the world, is an archaeological site at the open air. Its beauty and its story fascination are hidden in any corner, view, narrow lane or church. What to see in Rome: a city full of surprises.
If you decided to spend some days in Rome, and you're wondering about what to visit, well, you should know there are unlimited possibilities. All the archaeological sites are so beautiful, and they witness the great importance of the Roman Empire. You can't miss the following places, for sure:

- The Colosseum
- The Foro Romano
- The Terme di Caracalla.

Prepare yourselves for a beautiful trip, back in the time: Rome is ready to astonish to you!

The Colosseum: the largest amphitheater of the world
The Colosseum - also called Anfiteatro Flavio - surely is the most famous and biggest theatre of the world.
Some scholars suppose the name doesn't take origin only by its greatness, but also because of Nero colossal bronze statue nearby. The Colosseum is one of the UNESCO sites, considered world heritage, and it became one of the seven wonders, in 2007. You can visit it every day, except for Christmas Day and January 1st.

If you have the possibility, you can visit the Colosseum during the night - in specific summer nights - for a one-of-a-kind show. Otherwise, you can usually visit the third ring and the underground: fascinating places catching intensity and beauty. Among the copious legends, one of them tells the plants surrounding the Colosseum were moved by travelers’ shoes and animals' paws, from far countries all over the world.

The Foro Romano: in the heart of the ancient Rome
It is one of the most fascinating and wonderful places of the city, together with the Colosseum. Situated in the heart of the ancient Rome, it was the centre of politics, religion, and trades in the Eternal City.
The Foro Romano is composed of many monuments. There are many architectural works witnessing the medieval, imperial and republican ages. As it is so big, you can choose among numerous courses.
The Basilica Emilia - Republican age - is noticeable, as well as it is the last of its genre in the city; you can't actually see the Basilica Porcia, the Basilica Opimia, and the Basilica Sempronia anymore. Going back in the past, you will discover Giano's temple, the symbol of the Foro Romano. Saturn temple is historically very important, it is the most ancient holy site in Rome, after Vesta and Jupiter's temples.
Usually, temples - as you can see by their names - were built to honour divinities. However, the Temple of Concord deserves a visit, even if it was not dedicated to a divinity, but to a human being. Among the monuments of the Foro Romano, we can't forget the Mamertino prison, excavated in the caves, on two floors. If you decide to visit the Foro Romano, keep in mind it will be one of the richest days you can live in Rome. It offers facilities for people with disabilities, and we suggest to book it in advance. You can visit it every day, form 9am till 7pm.
If you want, you can book a ticket, from Monday to Friday, from 9am to 6p, and from 9am to 2pm, on Saturdays. 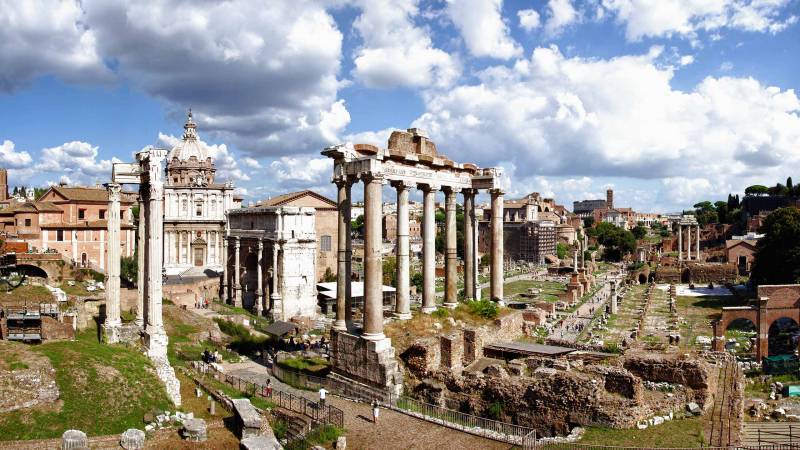 The Terme di Caracalla: the thermal baths complex of the Eternal City.
It's the best preserved complex in the Italian capital. The thermal baths were not designed just for baths, sport or body treatments - even if it seems to be obvious -, but also as a place for wellness and where to walk. Ancient Roman people actually gave a noticeable importance to interpersonal relationships, as well as body care. Emperor Settimio Severo was the designer, and they got completed by his son - Marco Aurelio Bassiano - famous as "Caracalla".
Just to give you a general idea of what this place is, it's enough you know it could host about 9000 people, together with the copious works of art, you can still see nowadays. In order to appreciate and totally enjoy the beauty of this site, we suggest you to book a private tour, available in various languages.
The place allows access to people with disabilities (with hygienic services dedicated). If you prefer to go around by yourself, we suggest you an audio-guide, that will enrich your trip of fun facts and information about the place. You can visit the site every day, except for the first of May, Christmas Day, and January 1st.