You can visit the museums in Rome for free every first Sunday of the month! Let's discover them

On every first Sunday of the month, many cultural places in Rome - museums, galleries, monuments and archaeological excavations - open their doors for free, to all the tourists and the residents. If you don't know where to start from and what to do, here you are some suggestions to plan your trip in Rome; the sites we're proposing you are part of the UNESCO heritage.

Sundays at the museum: what you can't miss: Colosseum and Fori Imperiali
One of the places you can't miss is the symbol of the city and of the country itself, the Colosseum, also called Anfiteatro Flavio. Its built started in 72 BC, and it represented a revolution of the relation between people and the government.
It was the site where gladiators used to fight to amuse visitors, together with exotic animals and hunting shows took place for free; the visitors could take advantage of the enormous space able to host almost 70000 people. According to security reasons, nowadays the entrance is limited to 3000 people per time, and you could find a long queue, so we suggest you to go there in advance; it is open from 8:30 am to 5 pm.
Another unmissable place you have to visit is the Fori Imperiali, the archaeological area situated between the Palatino and the Campidoglio hills, where the commercial exchanges took place, together with political, holy and judiciary activities. It is open from 8:30 am to 4:30 pm, last entrance at 3:30 pm. 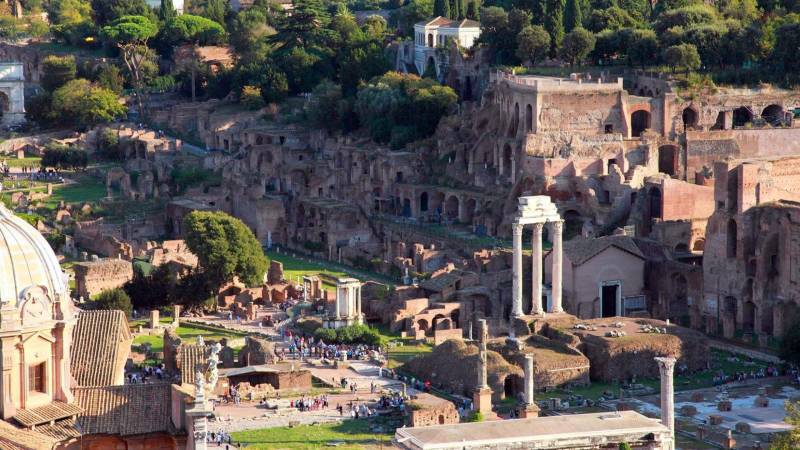 Near the Fori Imperiale, you can also visit the Mercati di Traiano and the Museo del Foro Imperiale. The Foro di Traiano is the last one in chronological order, and the biggest one. The buildings it is made of have had several different functions by the time, still under investigation nowadays. Inside the museum, you can discover its history, thanks to the multimedia settings, and to the exhibitions, by the hard work of scientists and archaeologists.

Terme di Caracalla and the Domus Aurea
The ancient Roman people liked to spend the whole day at the thermal baths; visiting the Terme di Caracalla can be an occasion to discover which was the daily life of the time, also because it is one of the best preserved sites in Rome. The thermal baths took their name from Caracalla, the Roman emperor who ordered to build them in 216 AD, and they could host 1500 people; thanks to the built of an aqueduct, they have been working for more than three centuries, until 537 AD.
Let's now talk about an emperor of Rome, maybe the most famous one: Nero. Situated in the area of the Oppio hill, there is the Domus Aurea, Nero's house, just restored thanks to a 12 million of euros investment. Aurea is the Latin translation of the word “gold”, the most used material for the building. Also in this case, as for the Colosseum, there is a limit of visitors admitted per day, in order to protect the area.

Musei Capitolini
The Musei Capitolini are situated in Piazza del Campidoglio, and they host several collection of marble and bronze statues, among which you will find the symbol of Rome, the wolf. And then, the famous equestrian statue of Marco Aurelio: the one you can see in the courtyard is a copy, as the original one is situated inside the museum, in Palazzo dei Conservatori. Tired of the ancient Roman people? Also modern and contemporary art museums can be visited for free
Situated in the house of the famous critic, in Via Zanardelli, the Museo Praz offers a collection made of more than 1200 works, including paintings, sculptures, crystals and furniture from a period dating back the end of the 18th and the first half of the nineteenth century. It is one of the most beautiful houses-museum, and the visitors will be accompanied by a guide, in groups of 10 people.
And if you desire to discover something more modern, you can visit the GNAM, the Galleria Nazionale di Arte Moderna e Contemporanea, for free, too. It is the only one national gallery dedicated to contemporary and modern art only, built at the end of the 19th century. It is made of 55 rooms, where more than 1000 of works out of thousands have been classified as masterpieces. Klimt, Kandiskij, Braque, Bocconi, Modigliani, Duchamp, and so on: it is a wonderful occasion to see all those wonderful works together. 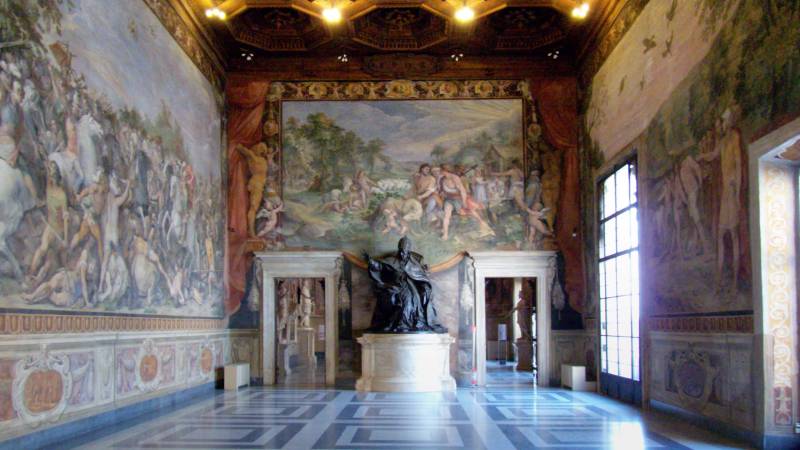 The Museo Boncompagni Ludovisi per le Arti decorative, the Costume and the Centrale Montemartini make part of a mix between ancient and modern art of the Musei Capitolini, being an extraordinary example of industrial archaeology. It is a conversion of a power plant into a museum.

A trip out of the town: the wonders of Ostia Antica
If you want to escape from the chaos of the city and take a breath of the sea, Ostia is what you are looking for. Located near Rome, you can easily get there by train in less than an hour, as the station is a few of steps from the archaeological diggings of Ostia Antica. Ostia Antica, together with Pompei, is the biggest archaeological site in the world.
Founded in the 4th century BC on the Tiber tiver (Ostia means river mouth in Latin), it had a great strategic importance. It is surrounded by walls, and there are several well preserved buildings that will allow you to imagine what it really was in the past.
After having visited the archaeological site, you can have a look at the beautiful village near there. And, always nearby, there is the Museo Ostiense where several statues, busts, and portraits are situated, after having been found during the excavations in Ostia Antica.