Rome is not only the capital of Italy, but also a city of innumerable shades. You can visit world famous monuments, but also do long walks among the many parks everywhere in the Eternal City.
Villa Torlonia is situated in the Nomentano district, rich in history and charm, definitely worth a visit if you are in Rome.

The park was property of the Pamphilj family, from the 17th century until the mid-18th. In 1760, it was bought by the Colonna family that moved it into an agricultural land.
The park construction began in 1806, commissioned to the architect Giuseppe Valadier by the banker Giovanni Raimondo Torlonia, who had bought the estate by the Colonna family, in 1797. Valadier connected all the buildings — the casino Abbati and the master's building, currently the Casino dei Principi. In addition to it, he also built the stables and an entrance demolished for the enlargement of Via Nomentana.
The architect also rearranged the park making perpendicular and symmetrical avenues crossing where the building is situated. In the same period it was built and restored, Villa Torlonia was enriched and embellished by paintings and sculptures of Classical art, purchased for the occasion.
In 1832 Giovanni Torlonia died, his son Alessandro succeeded him, and he commissioned the works Giovan Battista Caretti. He completed the Temple of Saturn, the Temple of the gallery with the fountain and the Temple of the Fake Ruins. Caretti also built the Coffee-House, the amphitheatre and the chapel of Saint Alexander, but these buildings no longer exist nowadays. Also Giuseppe Jappelli and Quintiliano Raimondi worked with Caretti. The first was responsible for the restyling of the Southern part of the building, in addition to the implementation of Capanna Svizzera and the Serra Moresca. The second one worked on the theatre and on what is now known as the Limonaia.
The Park of Villa Torlonia shows the features of different artists, and the Southern part is tipically Neoclassic. The Southern area is actually rich in lakes and avenues, in addition to very special buildings such as the Capanna Svizzera, the Grotta Moresca and the Campo dei Tornei. After Alessandro, Giovanni owned the estate: he moved the Capanna Svizzera into what nowadays is the Casina delle Civette. He also built a new wall along the Villino Rosso and the Medieval one.

Mussolini and Villa Torlonia
In the 20s, Giovanni Torlonia gave his official residence to Benito Mussolini, whereas he moved to the Casina delle Civette. The Duce paid an annual symbolic rent: one lira. Mussolini and his family settled on all the floors of the building, but kept almost all the pieces of furniture. The Duce used to sleep in the prince bedroom, his wife Rachele Guidi in the opposite room, the children and the staff on the third floor. The office of Mussolini was next to the bedroom, and downstairs there were some living rooms used by the whole family for studying or to receive any guests.

When World War II began, staying in Villa Torlonia became dangerous. For this reason, they decided to hide themselves in the cellars, so that the latter got equipped with steel doors and gas filters, together with any possible amenity. The Duce, however, soon realized the cellar was too far from the building, and he ordered to build one of the bunkers inside the underground rooms.
The bunker was made of reinforced concrete wall more than one metre thick. However, the increase of aerial bombardments made the construction of another bunker necessary : it was about 6 and a half metres under the ground. It had a circular shape, with about 4 metres-thick walls to better to the bombs. This work, however, has never been completed because the Duce and his family escaped when Badoglio was elected. The idea of Mussolini was lately exploited by the inhabitants of the near buildings to protect themselves by the German occupation. The bunker has been restored and it is accessible by a wooden platform. 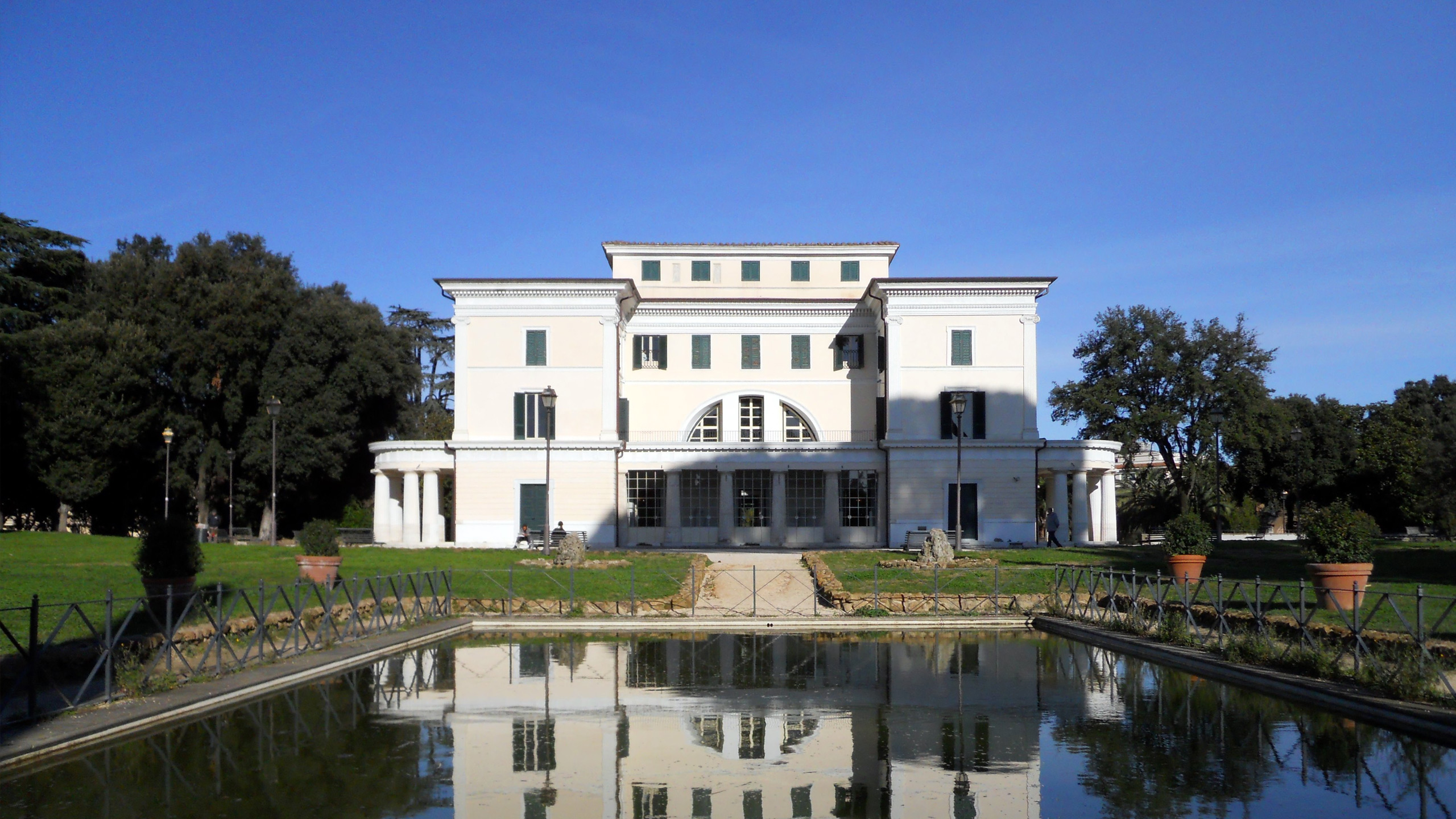 When the residence was bought by the Torlonia's, the architect Valadier was entrusted to restore the so-called Casino Nobile. He inserted mirrors in the dining room, whereas Domenico del Frate and Antonio Canova took care of the rooms decorations - the first one painting, and the second one realising low-reliefs.
Alessandro Torlonia - son of Giovanni - entrusted the work to Caretti. He made the pronaos, the side porticoes and the Gothic style of the decorative parts. The terracotta pediment that depicts the "triumph of Bacchus" is a work by Rinaldo Rinaldi, a pupil of Canova.
The ground floor and the "noble" were the areas where to receive the noble people, whereas the basement and second floor were occupied by the servants. From the basement, it is possible to access one of the bunkers built by Mussolini.

The Campo da Tornei is the wide area between the Serra Moresca and the theatre. It was designed by Jappelli, following the Medieval and Christian format. The stairs of the spectators are made of piperine.
Some ancient photos show that on the Eastern side there was an iron and copper curtain where the Princess Torlonia used to sit together with the whole court. The prince's tent was on the top of the hill and it was decorated with metal and copper coat of arms. The prince tents have not survived, but they still existed at the time of the Duce, as you can see from some photos depicting Mussolini playing tennis.