Discover Rome: From Monte dei Cocci to the Macro Museum, all the attractions of Testaccio district

Testaccio is a district of Rome where you can breathe the "true" air of the eternal city. Walking around the neighbourhood is like dealing with a city within a city, in an urban and social structure almost detached from the rest of the capital. Testaccio was born as a very popular district, even if now this feature has been lost for the arrival of new inhabitants belonging to various social classes. Today, not only workers, small traders or employees live in Testaccio, but people of any kind.
Being a "Testaccino" - citizen of Testaccio - was almost an identification mark and a source of pride, in the past. For those who lived in the neighbourhood, it meant being a true Roman citizen, "more Roman than Romans". There has always been a sort of lively and animated "dispute" between Trasteverini - citizens of Trastevere - and Testaccini for the title of "true Roman". Testaccio was built around two main neuralgic points: the open air market located in Piazza Testaccio and the Slaughterhouse, an industrial complex between the Tiber and the Monte dei Cocci. Both places granted an important feature of the area: good and genuine food. Even today, this peculiarity is still existing, you can find it in several “trattorias” and restaurants in the streets of the neighbourhood. The food was poor and the local gastronomy was based on the "quinto quarto", that is the offal. The following results are just amazing. In this region, the origin of some dishes is still a symbol of the Roman tradition: tripe "alla Romana", the Rigatoni con la Pajata - offals of veal -, liver with onions, Coda alla vaccinara - the oxtail - or Nervetti Conditi - nerves. To get to Testaccio, you can go pass near Piramide or Trastevere, via Marmorata, whereas along Via Manuzio or Via Galvani you can reach the Mattatoio - the slaughterhouse.

The Monte dei Cocci
The Monte dei Cocci, also known as Monte Testaccio, is located within the district. It is a sort of "landfill" dating back to the earliest times. In antiquity, the Romans actually went there to unload the remains of the oil amphorae from the river port on the Tiber. The crocks, over time, have accumulated forming a real hill on which today you can walk, discovering a series of interesting remains dating back to times of the past. Subsequently, at the basis of the hill some caves were excavated, initially used as stables and cellars: the Testaccini called them "grottini”, and as today, they hosted many bars, restaurants and disco-pubs protagonists of the Roman nightlife. The Monte dei Cocci can be visited only by groups accompanied by a guide, prior reservation, on certain days and specific periods.

The Mattatoio - the slaughterhouse
The building was designed by the architect Gioacchino Ersoch. The geometry of the slaughterhouse of Testaccio is typically industrial, with a schematic and well-organized plan. Inside the complex, there were stalls and animal enclosures, the sheds for the slaughtering and some other buildings for processing meat. There were also spaces where the means of transport could easily access. You can still see some original elements, such as the pillars or the gates of the stalls, made of iron. Walking through the streets of the complex, you will also notice the rails where the hanging hooks for the carcasses of animals were put.
The slaughterhouse is a very large complex working until 1975. From that date, it does not have its own identity nor a well-defined destination. It can be accessed by a Neo-classical portal where you can see a magnificent sculpture depicting Mercury catching a bull. Some of the old buildings were reused and they became university classrooms. Others have become exhibition spaces even if they find themselves living with old structures in bad conditions.

The MACRO Testaccio
The prominent building inside the Mattatoio di Testaccio undoubtedly is the MACRO Testaccio, a branch of the Museum of contemporary art of Rome situated in via Nizza. In addition to the museum itself, there is the Macro-Pelanda, a large space for exhibitions inside the pavilions once used for processing meat. Many events take place there, such as training activities, exhibitions and workshops. A part of the space behind the buildings of the MACRO Testaccio, the so-called Campo Boario, is used today by the Città dell'Altra Economia for outdoor events, such as those dedicated to the organic or fair trade. Nearby, you can visit a bookshop, a bar and a small supermarket selling organic products.

The New Market
In 2012, the neighbourhood market was moved to Via Galvani, near the Ex-slaughterhouse, from the historical Piazza Testaccio. It was an open market, but now the desks are in a contemporary-style structure designed by architect Marco Rietti. The environment is very bright, while the design is clean and basic. The aim of the new local market in Testaccio is to create a space not only for daily shopping, but also to give the Roman citizens a gathering place in the neighbourhood, where to have a quality lunch for a few money, or where to taste peculiar dishes by talented young chefs who prepare traditional dishes fusing them with the new style of street food, sitting on the shared tables in the square.
You can taste simple pasta recipes, the dishes of the "fifth quarter" salad sandwich, try versions made with organic ingredients or eat the Jewish-Roman cuisine. The kiosk of Cristina Bowerman deserves a special mention: she is a star chef, who allows to taste her gourmet dishes inside an unusual big glass of paper. 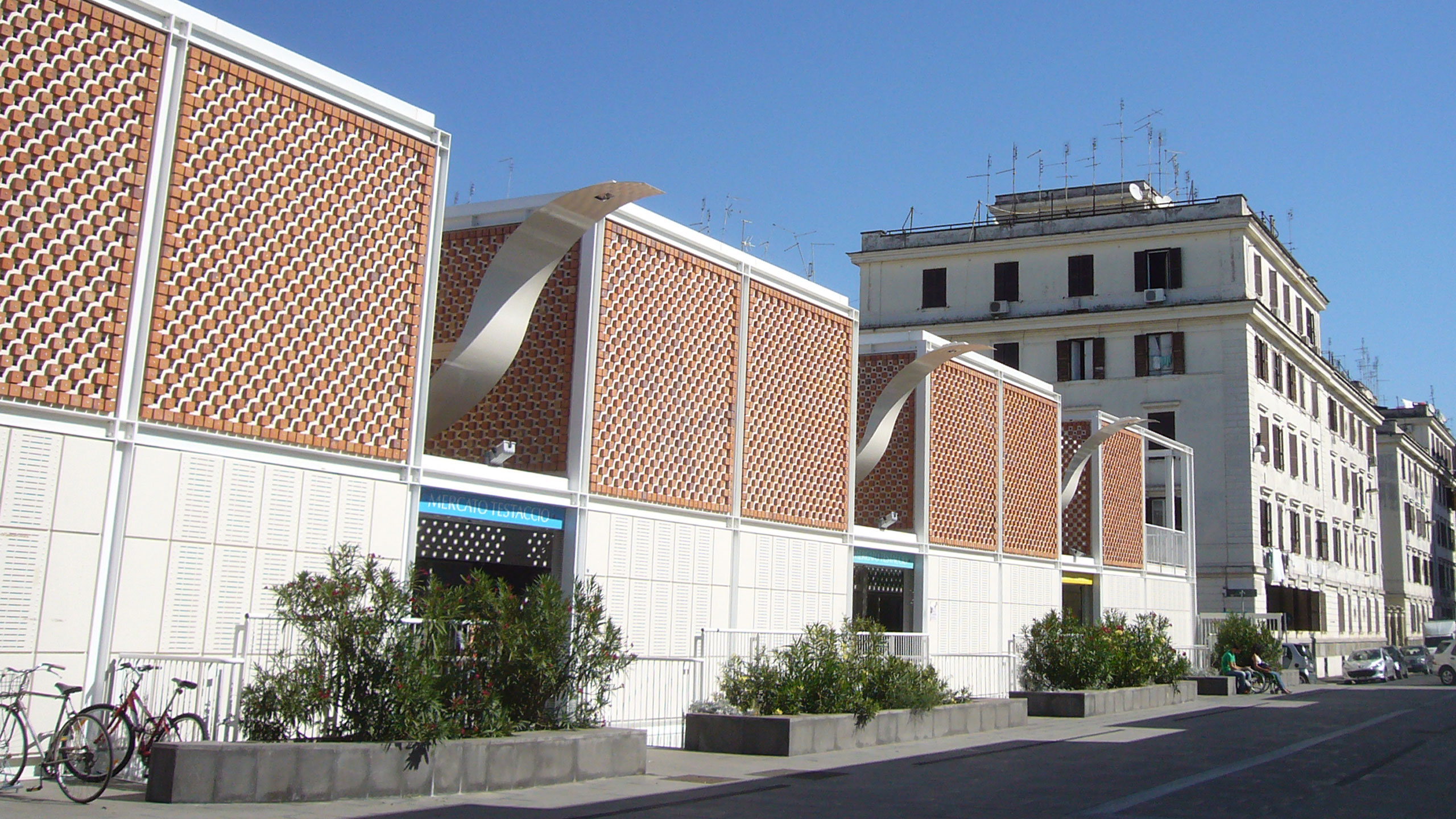