Events in Rome: on December 17th, the Saturnalia will be celebrated at the Terme di Caracalla

The eternal beauty of Rome is closely linked to its intense history, especially the one of the glorious Roman Empire: many monuments are linked to that period, from the Colosseum to the Imperial Forums up to the Circus Maximus. Just a stone's throw from this immense open-air stadium, the scene of exciting chariot races, the Terme di Caracalla rise up, among the largest and most sumptuous of the ancient world, considered one of the seven wonders of the Eternal City in the 5th century AD.
If you want to enjoy the timeless beauty of the Terme di Caracalla in the romantic and suggestive pre-Christmas atmosphere, you can do it for free: this marvel of the ancient world will be available to you on December 17th, in the memory of the day when they used to celebrate the Saturnalia.

Terme di Caracalla
The Terme di Caracalla are located a stone's throw from the Circus Maximus and the Cestia pyramid, in an area between the Campidoglio and the Colosseum. The baths have always symbolized the most vain part of the Roman citizen, who is not to be considered just a soldier or a politician. They actually loved to have fun, so much so that the saying in vogue at the time was "the baths, the wine and love send us down the drain but make life good". In particular, the passion for the baths was presumably born around the III BC, but at the time they were fee-paying and very modest. Over the time, however, the spas expanded and grew in splendour: there were the Baths of Agrippa, behind the Pantheon, those of Nero, but above all the Terme di Caracalla. They were born between AD 212 and 217 AD at the behest of Emperor Caracalla and they remained in work until the Goths who in 537 AD completely destroyed the Antonine Aqueduct in 537AD: the aqueduct, together with the Acqua Marcia Aqueduct, supplied the cisterns with water and fed that ingenious piping system that ran underground. While wandering among the remains of the Terme di Caracalla, imagine beneath your feet and behind the walls of the structure, there were hidden hearths and ovens that heated the water of the pools and cisterns. 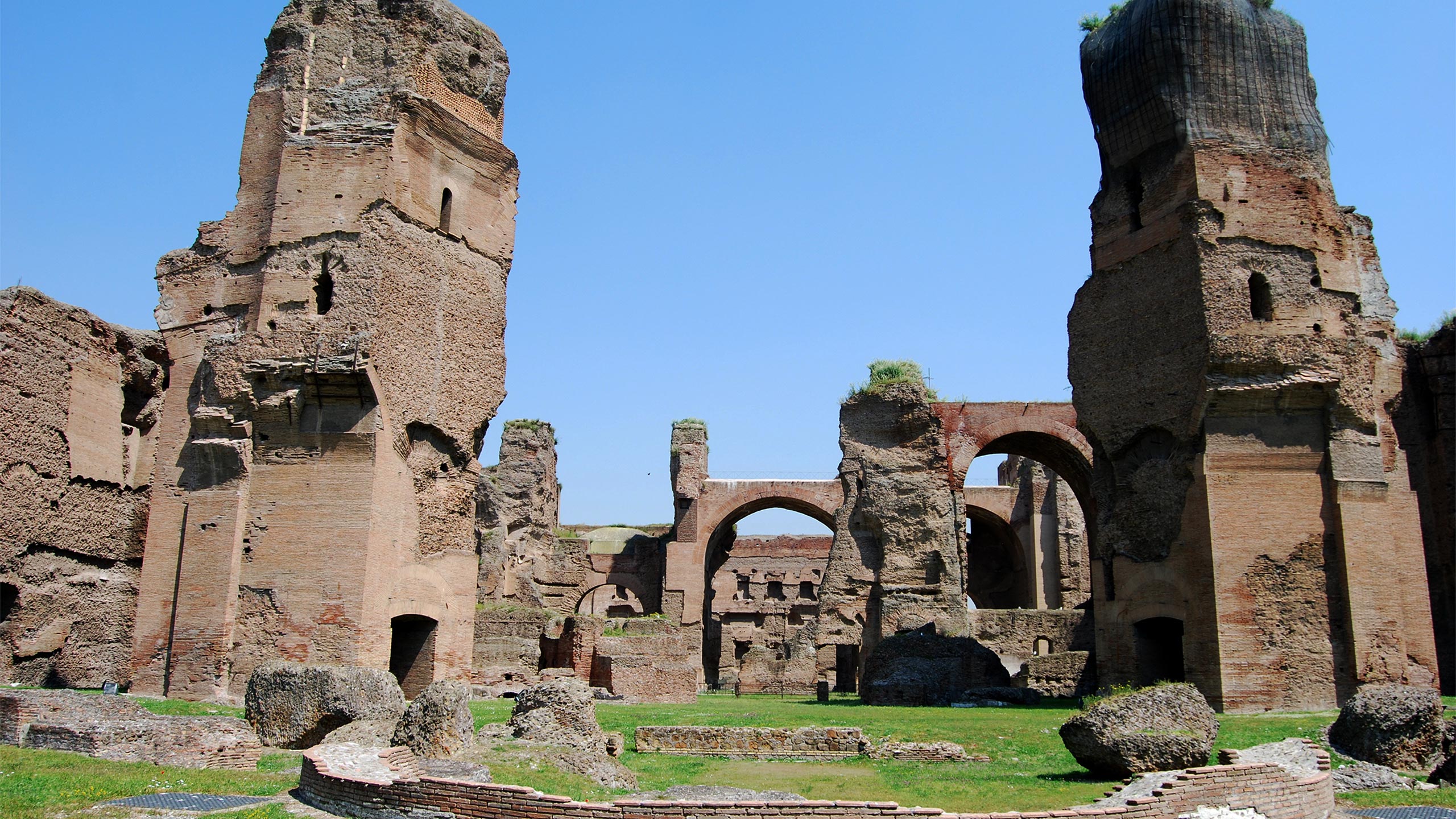 How the Terme di Caracalla were
Today, before your eyes, there are vestiges of the beauty of the past, giving a good idea of how they were, hosting up to 1600 people. There were four entrance doors and the whole structure was surrounded by columns, elegant porches and well-kept gardens.
The most recognisable part certainly is the exedra where the bleachers were placed and behind which were immense cisterns that could hold up to 80,000 litres of water; on the sides of this semicircular hollow you have to imagine two libraries, demonstrating to the Romans the cult of the body went together with mind. There actually were gymnasiums, saunas, changing rooms but also temples such as the underground one, dedicated to god Mitra.
Around the central axis, the main rooms of the spa opened up, starting from the calidarium: it was an immense circular room occupied by a pool filled with very hot water. Of the eight pillars that supported the dome above, only four still remain, and the chamber was full of large windows to allow sunlight warming up the calidarium as far as possible until sunset.
Also the tepidarium was a circular room but much smaller and less hot: in the centre there was rhw basilica with cross vaults: this construction shows you how the baths were also a place where politics was done or business was discussed.
The frigidarium was surrounded by niches and small rooms, particularly loved by the Roman matrons as massages and perfumed oils were used here. Finally there was the natatio, a large outdoor pool decorated by four massive granite columns (the only one of these found today in Florence in the Piazza di Santa Trinità).
On every floor or wall still standing today, you have to imagine all sorts of decorations: from floor mosaics made of glass paste to eastern polychrome marbles and evocative statues. Going to the Vatican Museums, for example, you will have the opportunity to admire a mosaic depicting sportsmen and athletes actually found in the Terme di Caracalla.

What Saturnalia are?
The Saturnalia, as you will guess from the name, were celebrations loved by the Romans, dedicated to the god Saturn. They were born around 217 BC and at the beginning they lasted just one day, on December 17th; Caesar extended the duration of the party to two days, then become three by Caligula up to 7 by Domitian, from 17th to 23rd December.
If you are wondering who Saturn was, then he was the father of Jupiter: he dispossessed his father then forced to abandon the Olympus to take refuge on the Earth, where he was welcomed into the Lazio by god Janus. Saturn, to thank the warm welcome, gave the legendary golden age Virgil talks about in the Hesiod: in that period, there apparently were no more wars, processes and diseases; the gladiators could fight without fearing death and the fields spontaneously produced without the need of the farmers' work.
The main feature of the Saturnalia was the recklessness, everything was allowed: "I Saturnalia!", to drink large quantities of wine at the Lucullian banquets, austere robes but above all social disorders. Slaves and servants actually dressed themselves up as rich gentlemen, wandering around the streets of Rome enjoying for a short time that freedom they were deprived all over the year. "Semel in anno licet insanire" was the motto of the Saturnalia: it was allowed to go crazy during those days of celebration.
The public celebrations began by a sacrifice to the god Saturn at his temple, located on the Campidoglio, followed by banquets, exchanges of gifts with lots of statuettes and the election of the Saturnalicius Princeps, a prince who had to guarantee the proper functioning of the celebrations. This role was an honour but it had to be repaid by one's own life, therefore sacrificed to the god Saturn.