Shopping in Rome: discovering the most picturesque Trastevere artisan ateliers

Trastevere is one of the most peculiar neighbourhoods of Rome. It is still called "er core de Roma" ("the heart of Rome", in Roman dialect), by the citizens of the capital, because of its authenticity, despite time goes.
Trastevere is visited by hundreds of Romans and tourists every day, walking around historical lanes and squares, giving hints that look like paintings. For those who love history and want to breathe the typical Roman atmosphere, Trastevere is perfect.

Among the several neighbourhoods of the capital, Trastevere is probably the most charming and lively. The evening gets bright thanks to some of the most famous and attended clubs of Rome, while by day, it is in a position offering sensational hints of hidden narrow lanes not even the Roman citizens themselves know.
The neighbourhood has several markets and small craft shops as it was in the past. All the streets and lanes of Trastevere run around Piazza Trilussa, overlooking the Tiber and Piazza Santa Maria in Trastevere, the beating heart of the neighbourhood.

The name of the district has ancient origins and dates back to the Latin "trans Tiberim", or "beyond the Tiber". This is because the city developed on the opposite shore. In the ancient Rome, the area where Trastevere is situated nowadays was reserved to Syriacs, before, and to the Jewish people, then.
Emperor Augustus included it within the "regiones urbane" but later, in the Middle Ages, the area got deserted, because of the Roman population decrease. Trastevere became part of the urban context two centuries later, when the neighbourhood began to be populated again. 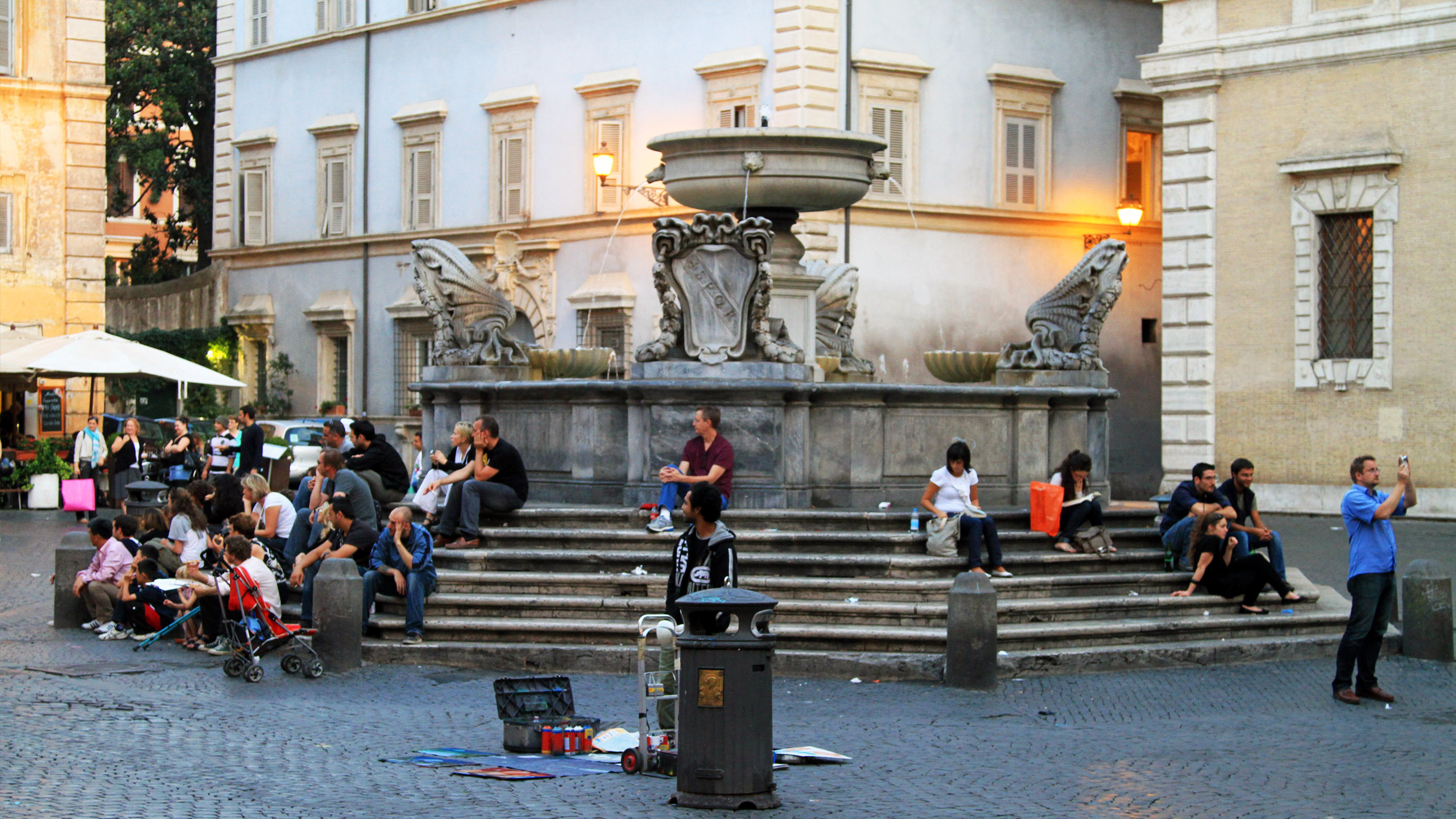 The best way to discover it now is following its several streets. Trastevere is an almost entirely pedestrian area, so we suggest you to get lost among this one-one-of-a-kind district. In addition to the numerous historical works in there, like the church of Santa Maria in Trastevere, Piazza Trilussa or the complex Casa Mattei, the area can offer a fantastic hint on the ancient handicraft shops as it was in the past. Trastevere actually is full of small stores preserving the same conditions they had in the past.

The grocery - in Roman dialect "er pizzicagnolo" or "pizzicarolo" - of the Longhi brothers is situated in Via S a Ripa, near Piazza San Cosimato, another peculiar place in Trastevere, near the church of the Santi Quaranta Martiri and the church of San Pasquale Baylon. The historical shop still represents a live benchmark for daily shopping, but it is also the perfect place where to taste optimal sandwiches.
They offer a wide range of regional and national cheeses, as well as salami, hams and much more. Oil, wine and spirits of various types, together with other food complete the offer of the store, making it the perfect place to find all you need. The real strength of the Longhi brothers is the homemade bread, produced as they did in the past.

Continuing your walk in the Trastevere district, in Piazza Sant'Apollonia, 13 and Via della Scala, 7, you will find Trast, a mono-brand store producing a very trendy clothing style for young people. The made in Italy brand is inspired by Trastevere district itself - connected to the choice of its name, too - and it was an idea of two friends.
The creations come from the vivacity and the mind of the Roman district. Trast aims to offer you something different from the homologated style, making you wear something expressing a personal style. The items are designed and handmade, to embody the made in Italy style is getting lost.

A few steps from Santa Maria in Trastevere, there is the atelier of Anna Retico, where jewels and bijoux are created. This small store succeeds to distinguish itself among the others in the district, thanks to its original proposals. The artist experiments and stirs different styles to express all its creativity.
If you decide to enter, you will find just her, working surrounded by numerous containers in perfect order, and you will be able to discover all the works made by recycled materials, like paper, glass, plastic or aluminium. There, you can buy whatever you want or ask for personalised objects or jewels.
The atelier produces also lamps and other pieces of furniture. You will be the one to decide the style of every object, from the most simple and essential ones to those characterised by peculiar features.
You can also buy accessories and bijoux made of transparent glass, or you can just get lost around the several innovations and one-of-a-kind models Anna offers you. Some pieces by Anna Retico are exposed in the Moma Museum in New York, and in the Palazzo delle Esposizioni in Rome.

La Latteria has recently opened, but it has very deep origins. In the past, there was a stable hosting a cow where it is situated now, Where that's why it took its name - "latteria" means "dairy store". It was formerly known as the "bar da Saverio". Today its look and its offer to customers has changed. In the room near the entrance, there are some items talking about the past.
In La Latteria you will still find good fresh milk (certainly not as they used to do two centuries ago), great for breakfast in the morning.
But the shop is open until evening, changing the culinary offer later in the day. Here you can take advantage of a good lunch, enjoy an aperitif surrounded by live music or relax during a dinner. The dishes on the menu change according to the seasons, and the offer is minimal to ensure greater attention to the choice of raw materials.
La Latteria is supplied only by small shops of the district to provide customers with farm-to-table products. The “tartare”, for example, comes from the historical store Bottega Liberati, the fish is from Moreno Cedroni and vegetables from Er Cimotto, a famous fruit shop in Trastevere.
You can choose between beer and wine, battles or glasses. The service is very polite and the restaurant has an informal style. The staff will tell you some food and wine anecdotes and notions about the place to increase your curiosity.