Located a few kilometres from the centre of Rome, Castel Gandolfo is one of the most picturesque historical villages of Castelli Romani. It is a small town on the top of the Albano Lake, at an altitude of 436 meters, famous for the quality of its typical food, the beauty and the calm of the natural landscapes, and the remarkable historical interest of the innumerable residences of the period.

History and origins of Castel Gandolfo
Castel Gandolfo boasts ancient origins, dating back to about 400 b.C., when the Roman people started exploiting its fertile volcanic lands to install prosperous crops and animal farms. During those years, also an extraordinary engineering work was realized: a tunnel into the rock to control the water level of the Albano Lake, still admirable today in all its magnificence.
However, during the Republican period of the Roman Empire, Castel Gandolfo underwent a strong urbanization process, with the built of the first stately residences by the Roman nobles of the time. Among these, the splendid Villa di Domiziano was built, an imposing complex of which unfortunately only some remains - property of the Vatican State - are still existing today.
In the following years, Castel Gandolfo became an important agricultural area, an area where peasants worked in the calm of the monasteries and the ecclesiastical buildings, where the men of the Church dedicated themselves to study and to pray. From the first half of 1600, the town became the official summer residence of the Pope, an event that brought several benefits, including significant architectural interventions by important artists such as Bernini, until the transformation occurred in recent decades, making it a food and wine centre of international importance.

Museums and historical buildings
The first buildings of historical value still standing in Castel Gandolfo were built during the first half of 1500, when in the area - nowadays part of the Regional Park of Castelli Romani - were built estates such as the Villa Pontificia and the Villa of Domitian. The Villa Pontificia - historical pontifical summer residence - is part of an impressive cultural heritage on a 55 hectares surface.
Known also as the Palazzo Apostolico, today it does not host the Pope anymore: it is a museum. Inside you can admire the Salone degli Svizzeri, where to see the papal coats of arms and the armaments of the Swiss guards, or the Papal chapel of Urban VIII, with portraits and frescoes of inestimable artistic value.
Also Villa Cybo and Villa Barberini are very beautiful, in the immense area of the Villa of Domitian. These buildings are characterized by wonderful gardens decorated by fountains and sculptures, whereas tens of works of art are situated in the internal area, by the best artists of the seventeenth and eighteenth century. A part of Villa Cybo hosts an important today conference room, for meetings about current themes concerning the Church. 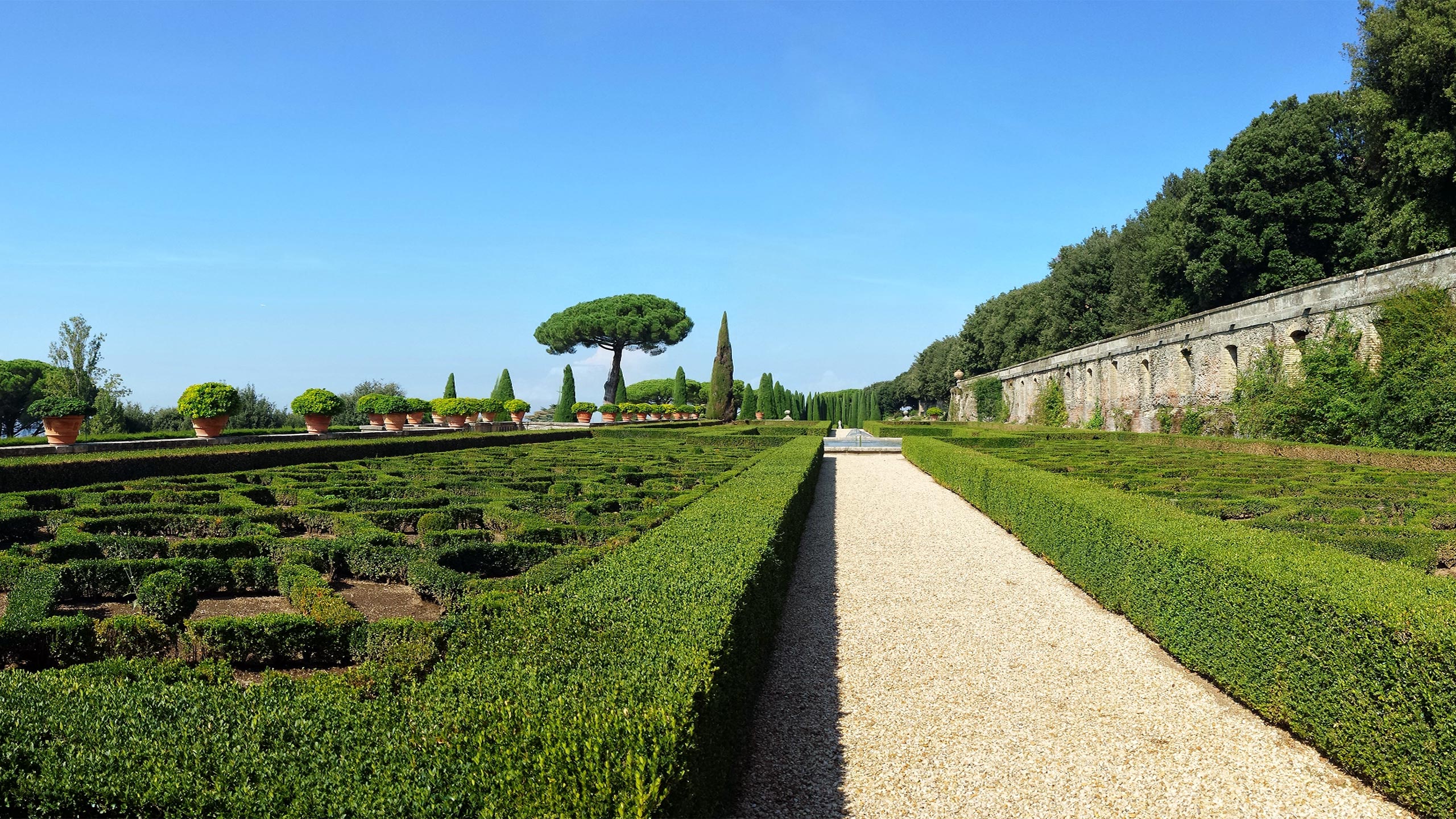 Landscape beauties
Castel Gandolfo is included in the most beautiful villages in Italy, a prestigious selection created by ANCI - the National Italian Towns Association - promoting and preserving the most evocative areas of our country. The central point of the natural beauty of the town obviously is the Albano Lake, a volcanic water mirror giving a unique atmosphere to these lands. The lake has a depth of 168 meters, with an extremely luxuriant native flora and fauna along its slopes, as well as an abundant fish presence with species such as the Royal Persian, the Scardinius, the Eel and the Tench. Equally noticeable is the presence of birds, including the Cormorant, the Mallard and the Coot, visible from different locations, for the joy of birdwatchers.
On the lake, you can have excursions, pleasant walks along the banks of the western side, and play sport activities such as canoeing and kayak, in summer and spring. For lovers of bike rides, there are several organized groups mountain bike tours, along the paths along the Albano Lake and the main streets of the historical centre of Castel Gandolfo.

Food and wine
Castel Gandolfo is famous for the quality of local products, the real delicacies attracting tourists all over Europe every year. The area is famous for the classic wild strawberries, for example, a special variety that grows on this extremely fertile volcanic soil, usually decorating very delicate and delicious cakes and pies, to be enjoyed with a good Espresso, admiring the beautiful landscape offered by the lake.
The village is also known for its salamis and cheese, such as Roman Ricotta, Pecorino cheese, Roman Corallina - a salami - and the cooked salami, typical of the winter months. These products are characterized by a strong flavour and a unique taste, which contribute to the genuine food you can find in the several restaurants and “fraschette” - typical Roman premises where to eat - in the area. Also the wines of the Castelli Romani, such as the Colli Lanuvi, the Frascati DOC, the Marino DOC and the classic Romanella - a slightly sparkling wine good for accompanying cheese, salami, and strong first courses - are very famous.

What to visit in the surroundings
In addition to all the historical, scenic and wine and food beauties of the area, it is possible to take a trip to Castel Gandolfo to visit the enchanting surroundings of the village. For example, nearby there are important historical towns, such as Rocca di Papa, Nemi, Albano Laziale, Genzano and Monte Porzio Catone, one-of-a-kind places in the Lazio hinterland, real gems of the Castelli Romani Regional Park.

How to reach Castel Gandolfo
Castel Gandolfo is easily reachable from Rome by car or public transport. In the latter case, it is possible to travel by Trenitalia regional service, from Termini station to Albano Laziale, from where you can easily reach the historical village in a few minutes by a long stairs. An alternative route departs from Anagnina station: several Cotral buses depart daily, heading towards Velletri, some of them also stopping at Castel Gandolfo.